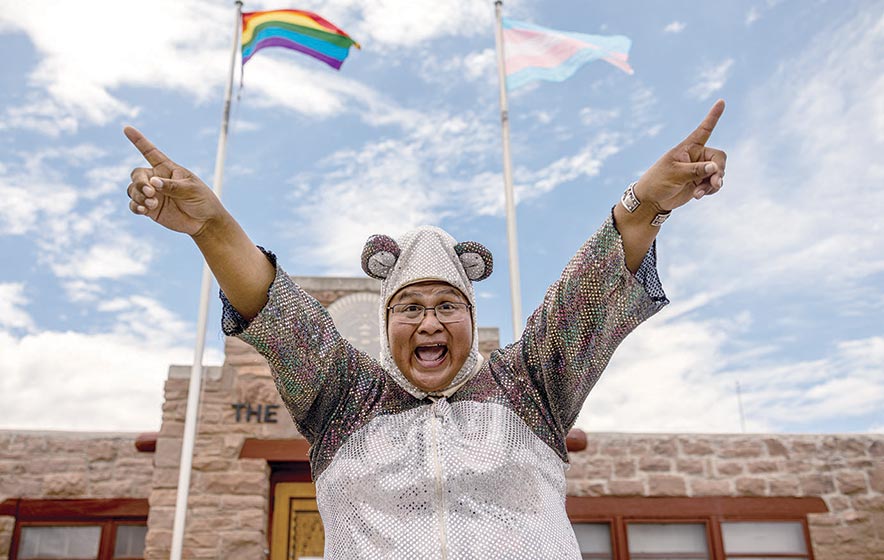 WINDOW ROCK-- Throughout the in-person events for Navajo Nation Pride on Saturday, the thought of making a better world for LGBTQ+ Diné youth was reinforced again and again.

Before the festival began on Saturday at Veterans Memorial Park, Alray Nelson, executive director and co-founder of Diné Pride, encouraged people to live their lives.

“We’re going to live our lives in sacredness because that means that your life is sacred,” Nelson said. “To the kids here, it’s OK to be who you are. You should be unapologetic about how you live your life.”

While the festival was underway, vendors surrounded the main stage selling Pride-related items. Many were part of the LGBTQ+ community themselves.

One vendor, Allen Abeyta, from To’hajiilee but currently residing in Albuquerque, said Navajo Nation Pride is important to him because it is good to show that there is a LGBTQ+ community on the Nation.

“I think it’s important that people from the whole Navajo Nation and the others that live off the reservation, that they see there’s people here,” he said. “That there’s gays and lesbians and transgender people here. Just show people that we’re out and there’s people everywhere like them.”

He hopes this representation of the Diné LGBTQ+ community will encourage more people to come to the event so it will grow in years to come. 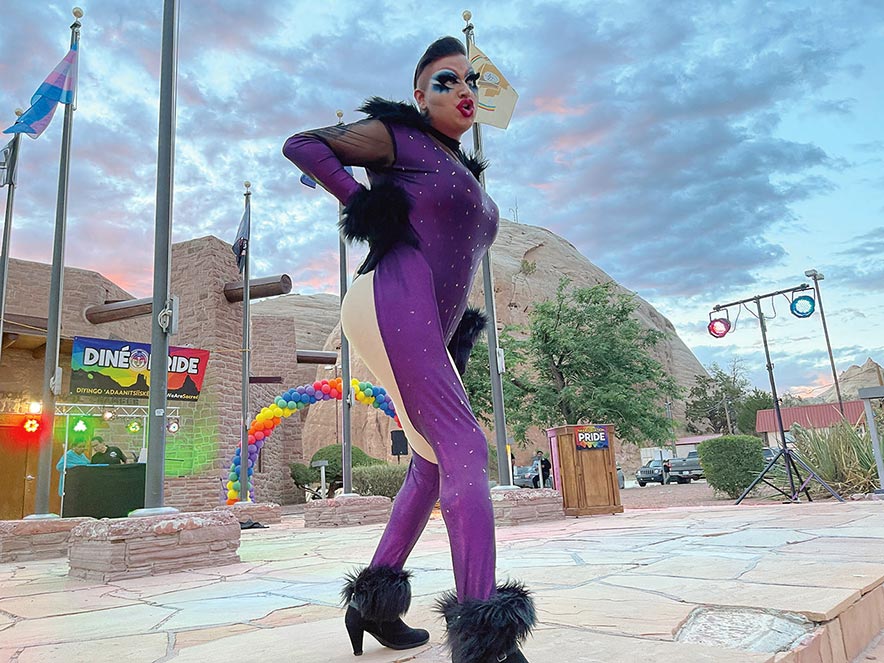 The trend of wanting to encourage more people to be proud of who they are continued into the last event of the celebration, a drag show held at El Morro Theater in Gallup.

The drag show included Native performers who came with the intent of putting a smile on people’s faces. They also encouraged anyone who may struggle with their identity.

Some of the performers were Miss Paige, Navi Ho, Judam Jackson and Leslie Lewinsky.

Ryan Jones Miguel, known by his stage name Judam Jackson, is from the Gila River Indian Community and the lower Santan Village. He is O’odham, Yaqui, Hispanic, and Black.

Miguel began his journey with drag shows about 11 years ago when he started as a backup dancer and began choregraphing and music editing for drag queen to compete in national pageants across the country.

“I’ve dedicated my time to help the education needs from that (the scholarship),” Miguel said. “At times like this (Diné Pride) we just need to come together. I don’t see tribes, I see all of us as one.”

Pride is important to him because it signifies love.

“Without the love, you’re not going to be able to have that pride for yourself or another person,” he said. “Loving yourself is pride for the heart before your mind because you have to allow that warmth to consume you.”

Navajo Nation Pride Drag Show performers included, from left to right, Tomahawk Martini, Shania Skyy and Navi Ho who strike a pose Friday evening in Window Rock. (Photo/Jalen Woody/Navajo Times)
Navi Ho, 44, is Diné and began performing in drag in 2013 after becoming a part of the Sisters of Perpetual of Indulgence in 2010. She became the first Native sister with the organization and has been with the organization ever since.

When performing, Navi Ho searches for music that she feels will inspire people. She used an example from the drag show that occurred early Saturday at the festival for Navajo Nation Pride where she performed to the song, “You Will Be Found,” from the musical “Dear Evan Hansen.”

“It was just about those people that are hiding, or they’re scared, and they don’t want to come out,” she said. “I want to be that beacon of hope that they can come out, I will be there for them. I will be sitting there with my light to help them in the darkness.”

She also spoke about the meaning behind the song she chose for later that night which was “Children” by Billy Porter.

“It’s just showing the young ones like, ‘Hey, I’m still here, I may be an old queen but I’m still here and I’m here for you to get you guys through this,’” Navi Ho said.

She said when she was younger, she would have never thought there would be a Navajo Nation Pride and she believes it is enlightening.

“Allowing us to speak our mind and speak our truth, being two spirit too, Nadleeh,” she said. “The teachings that were once hush hush or taboo are now coming out and being told and it’s very inspiring.”