WASHINGTON — Wasting no time getting to work on his first day as leader of the United States, President Joe Biden signed 17 executive orders that reversed his predecessor’s policies. 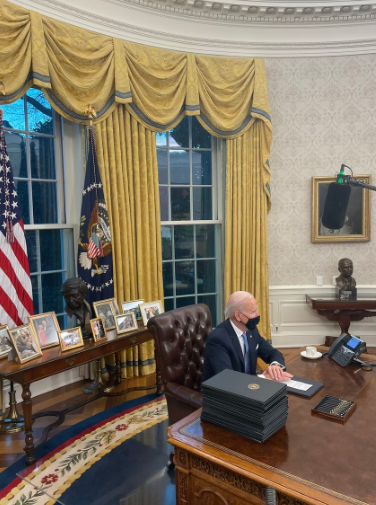 Among the 17 executive orders important to Indian Country, the president canceled the presidential permit needed to finish the Keystone XL pipeline, which was a project endorsed by Trump in his first days in office.

Justification for halting the pipeline was explained in the executive order:

“In 2015, following an exhaustive review, the Department of State and the President determined that approving the proposed Keystone XL pipeline would not serve the U.S. national interest. That analysis, in addition to concluding that the significance of the proposed pipeline for our energy security and economy is limited, stressed that the United States must prioritize the development of a clean energy economy, which will in turn create good jobs. The analysis further concluded that approval of the proposed pipeline would undermine U.S. climate leadership by undercutting the credibility and influence of the United States in urging other countries to take ambitious climate action.”

Cheyenne River Sioux Tribal Chairman Harold Frazier said in a written statement released on Wednesday evening that it is rare that a promise made to “our people is kept by the United States.” Frazier said he appreciates Biden’s honesty.

“This project has scarred our territorial lands with its presence and threatened our people like a dagger to our throats. We have witnessed the invasion of our land and the genocide of our families and this project is an extension of the injustices we have suffered,” Frazier said.

Frazier said he looks forward to working with the Biden administration to find peaceful solutions to protecting our land and environment.

In other actions taken on his first day in office that are Indian Country’s concerns, Biden said he will direct the U.S. Dept. of the Interior to review the boundaries for Bears Ears and Grand Staircase-Escalante national monuments.

The new president also signed an executive order that places a temporary moratorium on oil and gas leasing agreements in the Arctic National Wildlife Refuge the Trump administration rushed during the last days of Trump’s presidency.

The Bears Ears national monument was created by the Obama administration under the Antiquities Act. Located in Utah, the monument is sacred to tribes and is filled with tribal cultural artifacts.

Other executive orders signed on his first day in office included an order for the United States to rejoin the Paris Climate Agreement. Additionally, the president signed an executive order that requires individuals to wear facial masks while in federal buildings.