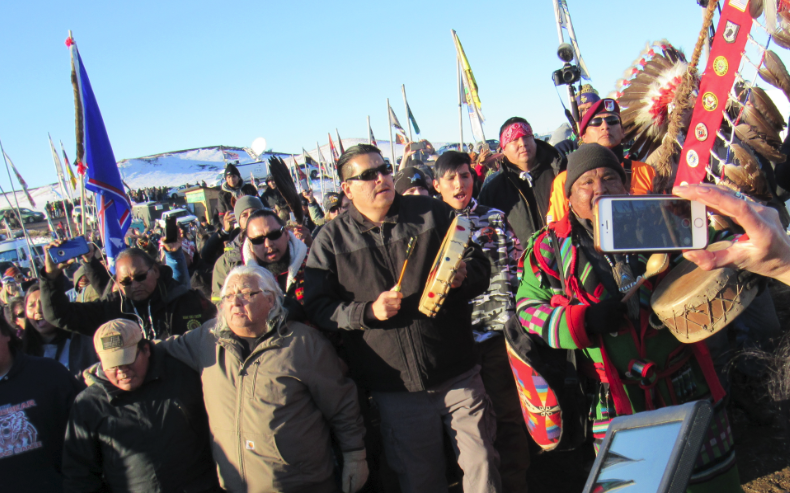 The Dakota Access pipeline was the center of controversy four years ago when tens of thousands of American Indians and allies protested at Standing Rock. The DAPL crosses beneath the Missouri River at Lake Oahe just half a mile from the Standing Rock Indian reservation in North Dakota, on unceded ancestral lands.

On Wednesday a three-judge panel of the U.S. Court of Appeals for the District of Columbia ruled the district court did not have the “findings necessary” to close down the pipeline.

“At this juncture, appellants have failed to make a strong showing of likely success on their claims that the district court erred in directing the Corps to prepare an environmental impact statement,” the decision said.

While the oil can keep flowing, the appeals court dissolved an administrative stay, vacating the permit for the pipeline to cross underneath Lake Oahe, which leaves the pipeline operating illegally. It falls to the U.S. Army Corps of Engineers to decide whether to exercise its authority to shut down the pipeline, and the issue will go back to the district court for more proceedings if they don’t.

“We’ve been in this legal battle for four years, and we aren’t giving up this fight,” said Standing Rock Sioux Tribe Chairman Mike Faith. “As the environmental review process gets underway in the months ahead, we look forward to showing why the Dakota Access Pipeline is too dangerous to operate.”

Chase Iron Eyes, lead counsel for the Lakota People’s Law Project, does not see Wednesday’s ruling as a complete defeat.

“Today’s outcome isn’t as negative as it may appear for tribes and environmentalists. Even if the oil continues flowing for the moment, the ruling keeps us on the trajectory toward shutting down the pipeline. DAPL’s permit remains vacated, and Judge Boasberg has a roadmap for strengthening his injunction per Supreme Court precedent. The appellate court specifically cited a four-part test they expect Judge Boasberg to consider, and there’s no reason to assume he’ll come to a different conclusion after reviewing that,” Iron Eyes said.

The DAPL is owned and operated by Energy Transfer, based in Dallas, Texas. Energy Transfer appealed the July 6 decision immediately after Judge Borsberg issued his ruling.

Tribal officials have maintained an oil spill from the DAPL would contaminate the Standing Rock Tribe’s drinking water and potentially the drinking water supply for some 17 million people downriver.

A final decision on whether to reissue permits for the Dakota Access Pipeline is unlikely until after the 2020 presidential election, which sets up the possibility of permanent closure.