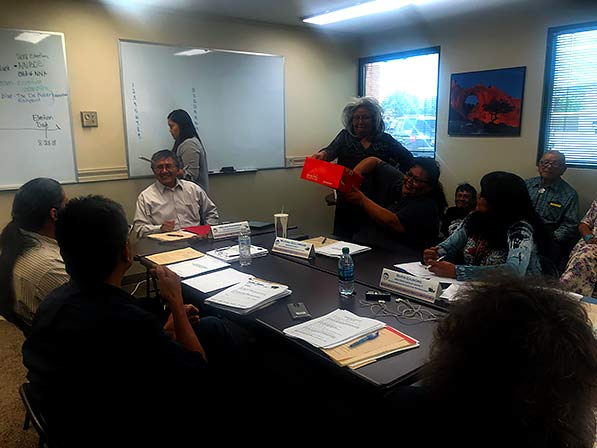 WINDOW ROCK, Ariz. — After Navajo Nation President Jonathan Nez vetoed a bill on July 3 that would have canceled the tribe’s August primary election out of COVID-19 concerns, the Navajo Nation Council will vote this week to override the president’s decision. To overturn a presidential veto requires two-thirds of the legislative branch to vote in its favor.

The resolution passed in April by the Navajo Nation Council would cancel the primary and conduct the Nov. 3 general election by plurality vote. The resolution was recommended by the Navajo Board of Election Supervisors to reduce the further spread of COVID-19 on the nation’s largest reservation that has been hit the hardest in Indian Country, with about 8,684 positive cases and 431 deaths as of Wednesday.

President Nez and Vice President Myron Lizer vetoed the resolution earlier this month, saying Navajo Nation citizens have the right to vote for their leaders.

“We appreciate the concerns brought forth, but we must also remember that the Navajo people’s right to vote is an issue that the Navajo Nation has fought long and hard to protect across multiple states and jurisdictions. The power to vote and participate in electing our leaders is the most basic right afforded by our democracy,” Nez said in a statement.

“We cannot simply cancel the election without putting forth a concerted effort to consider alternatives such as drive-thru voting or other options that include social distancing, mask requirements, and other precautionary measures. If the states and counties can hold their primary elections with safeguards in place, then the Navajo Nation should be able to do it also.”

Nez is concerned the Navajo Nation could face lawsuits if the primary election is canceled.

“We understand the concerns for the health and well-being of our people and we commend the Council for their good intent, but this presents an opportunity to challenge the Navajo Election Administration, to step up and develop accommodations and safeguards to allow our people to vote during the primary election in August,” Nez said.

Due to the COVID-19 pandemic, the Navajo Nation Council is holding its summer session via teleconference. The date for the vote to override the veto was not disclosed to the press.