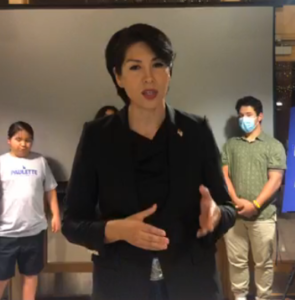 BOISE, Idaho — Paulette Jordan won the Democratic nomination for the United States Senate seat in Idaho on Tuesday night. Jordan is a tribal citizen of the Coeur d’Alene Tribe of Indians, where she has previously served on the tribal council.

“Leadership matters,” Jordan said during her acceptance speech on Tuesday night. “The Democratic Party, for the first time, is looking at Idaho to take this seat. So, let’s show them, Idaho. Boise is one of the fastest-growing cities in America and will demand new, innovative leadership.”

Jordan was one of two candidates seeking the Democratic nomination to challenge incumbent Sen. Jim Risch, a Boise Republican, who is seeking his third six-year term. He ran unopposed in the GOP primary. Risch currently serves as the chairman of the Senate Foreign Relations Committee.

Jordan was the Democratic gubernatorial candidate for governor of Idaho in 2018 and lost to Republican Gov. Brad Little. During that race, she resigned her seat as a state representative during her second term..

Jordan currently serves as secretary on the Board of Directors of the National Indian Gaming Association.

Idaho has not elected a Democrat in 46 years to the U.S. Senate since Sen. Frank Church won a fourth term in 1974.