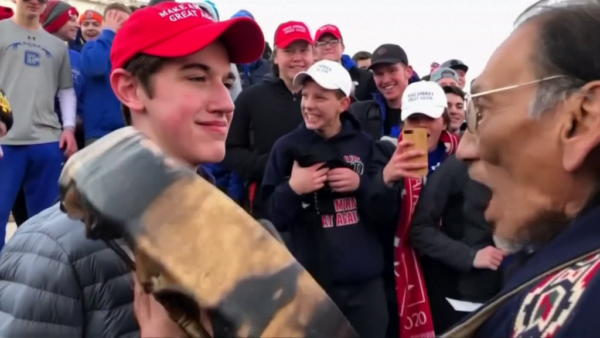 NEW YORK — On Tuesday, CNN settled a lawsuit brought on behalf of Nicholas Sandmann, who made national news last January after he stood face-to-face with Nathan Phillips, an Omaha elder from Ypsilanti, Michigan at the Lincoln Memorial.

The terms of the settlement were not disclosed by either party on Tuesday.

CNN, along with several other national media, reported on an apparent confrontation with a group of students from Covington Catholic School in Convington, Kentucky, who were in Washington, D.C. last January 18, 2019, to attend an annual March of Life rally. The high school students were in the area at the Lincoln Memorial waiting for a bus when the group met up with remnants of the Indigenous Peoples March that had just concluded.

Wearing red "Make America Great Again" caps, the Covington high schoolers were reportedly being taunted by a group  of black men who identified as members of the Black Hebrew Israelites.

Phillips began drumming the American Indian Movement anthem. He later said he was trying the defuse the situation between the high schoolers and the Black Hebrew Israelites. Caputured on a video that went viral on social media, and then picked up by CNN, was a young Sandmann in what appeared to be a face-to-face standoff with Phillips.

By March 2019, attorneys representing Sandmann sued CNN. The lawsuit contended: "CNN brought down the full force of its corporate power, influence, and wealth on Nicholas by falsely attacking, vilifying, and bullying him despite the fact that he was a minor child."

Later, the Washington Post and NBC Universal were sued. The lawsuits are still pending.