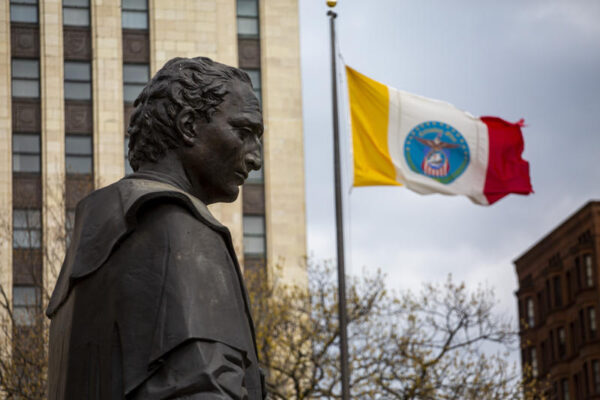 COLUMBUS, Ohio — A statue of Christopher Columbus that stood outside City Hall in Columbus for almost 65 years was removed without incident by a crane on Wednesday morning.

Supporters credited Columbus Mayor Andrew J. Ginther for the peaceful removal of the Columbus statue in the city that is also the state capital of Ohio. Working with the guidance of the Columbus Art Commission, McKay Lodge Art Conservation Laboratory and Smoot Construction, the statue was removed Wednesday morning.

"For many people in our community, the statue represents patriarchy, oppression and divisiveness,” Ginther said.  “That does not represent our great city, and we will no longer live in the shadow of our ugly past."

The statue was removed by crane, placed on a flatbed truck and transported to a secure city facility for safekeeping.

The people of Genoa, Italy, the birthplace of Christopher Columbus, gifted the 20-foot statue to the city in October 1955 during the annual Columbus Day holiday events.

The move to remove the statue comes in wake of a movement across the United States to remove statues that are deemed offensive.

Last month, a statue of Christopher Columbus was toppled outside the Minnesota State Capitol in Saint Paul. In Virginia, a Columbus statue was taken down, set afire and thrown into a lake by protesters.

American Indians have worked for decades on changing the name of the Columbus Day national holiday to Indigenous Peoples’ Day and pushed for removal of Columbus statues because Columbus is not a hero in Indian Country. The notion Columbus “discovered” America is offensive to American Indians.

The Columbus Art Commission was established by Columbus City Code and is responsible for the approval of all art purchased, commissioned or accepted as a gift by the City, as well as all art proposed for placement anywhere within the public right-of-way or on property owned or leased by the city of Columbus.

Columbus city officials say a participatory process will help determine how to best replace the statue and evaluate the diversity and inclusiveness of all public art, including other monuments, statues and art installations, and the artists, identifying the seal and flag, and to make recommendations for change.