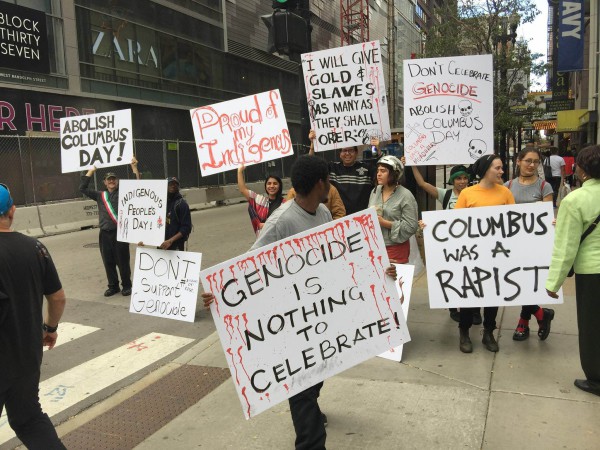 CHICAGO — A group of American Indians made public comments before the Chicago Board of Education on Wednesday, encouraging the country’s third-largest school district—355,000 students—to recognize Indigenous Peoples’ Day instead of Columbus Day.

Chicago Public Schools has been recognizing both Indigenous Peoples’ Day and Columbus Day on its official school calendar as a shared holiday on the second Monday of October.

During comment before the school board, 12 Indigenous members of the Chicago community and three non-Native supporters of the change spoke on Wednesday because the school board was to vote on an amendment to only recognize Indigenous Peoples’ Day. The group delivered over 5,700 signatures from community members in support of the measure.

The amendment was introduced by school board member Elizabeth Todd-Breland, who teaches history at the University of Illinois at Chicago. The amendment passed with a 5-2 vote.

“This is an exciting day for our Native community here in Chicago because it brings attention to the fact we are still here and now it signifies a way to ensure our history is being taught in Chicago Public Schools,” Heather Miller (Wyandotte) commented to Native News Online on Thursday.

Miller is one of several individuals who have been working with Chicago Public Schools on the change. Miller says it is about teaching a better Native story and history in the schools.

“This was a very incredible display of our Native community coming together to support an important issue that impacts our Native students and all other students in the school system,” Miller said. “Today we get to celebrate our first win for the Indigenous Peoples’ Day movement here in Chicago. While this is the first step for a more equitable city, the fight is not over, and we will continue to push for change in our city, county, and state.”

Columbus Day dates back to 1892, when President William Henry Harrison made a proclamation observing a day set aside to celebrate Christopher Columbus. It has been a federal holiday since 1937.

Many American Indians have long resisted the observance of a day to honor Christopher Columbus, who is credited with “discovering” the Americas in American history.