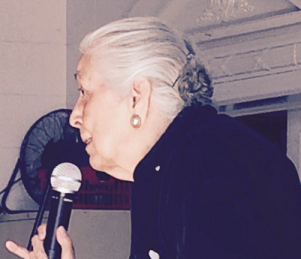 Susan  Kelly Power, whose Indian name meant "Storm Clouds Gathering," arrived in Chicago when she was only 15 years old from the Standing Rock Indian Reservation in 1942. She was sent to the Windy City by her mother on "loan" to a fellow Native American woman who was living in Chicago, but needed a caregiver. Power had the intention of being there until she was no longer needed to provide care to her mother's friend. Her plans changed when she attempted to save money for her trip back to Standing Rock, but found she was sending so much money home to her family on the reservation, she never moved back. Power stayed in Chicago until the end of her life last Saturday. Power was 97.

Power is being remembered for being a mother, lifetime activist, friend to many in Chicago, and one of the founding members of the American Indian Center of Chicago, which was established in 1953. It was one of the first urban centers opened in the country to become a gathering place for the large influx of Native Americans into cities at the end of World War II and the federal Indian Relocation program. When the relocation program began, there were only about 750 Native Americans living in Chicago. Within five years, the number grew to over 10,000.

Power told a community gathering at the American Indian Center of Chicago in February 20, 2016, an event covered by Native News Online, that it was a lonely existence in a large metropolitan of Chicago when she first arrived.

"I know I was quite lonely. I wanted to be around other Indians, as we were called then. They did not call us Native Americans back then," Power said speaking of her early days in Chicago. "I would stop any dark-skinned person who looked Idnian to find out if they were. Most of the time they were of Spanish heritage. I was always glad to see an Indian."

Power's daugthter, Mona Susan Power, said her mother walked in the path of her ancestors, feeling the responsibility that comes when you're descended from a line of hereditary Yanktonai Dakota chiefs and a mother who was a tribal leader.

"Her mother often said, 'The chief's family eats last,' and Power lived according to that creed, forever generous in putting community needs ahead of her own, sharing what she had. Additionally, she was an extrovert who loved people of all backgrounds, and keenly felt the pain of injustices they suffered. She did her best to help," Mona Susan Power said to Native News Online in an email.

Born on in 1925 at Fort Yates, North Dakota, on the Standing Rock Sioux Reservation, Power was deeply proud of her Yanktonai Dakota heritage, and of being descended from a line of hereditary chiefs, including her great-grandfather, Chief Mahto Nunpa.

Her mother, Josephine Gates Kelly, was a revered leader who ultimately became chairperson of the tribe in 1946 and served for three terms as tribal chair. Power had tremendous admiration for her mother's accomplishments as a leader, and sought to follow in her footsteps, eventually becoming an activist leader herself.

On her way to becoming as she grew into adulthood in Chicago, Power worked in a variety of different jobs, including working in a factory and in later years proofreading law journals for the University of Chicago Law School, working at the Museum of Science & Industry, the Salvation Army, and the Census Bureau.

According to her daughter, her favorie job was at A.C. McClurg's Book Distributing, becoming an executive assist for the company's director, Guy Kendall.  Power was a voracious reader, who loved nothing better than being in the heart of the book world, meeting authors, enjoying advance access to forthcoming titles. She regularly visited libraries and used bookstores throughout the city, gradually putting together her own impressive collection of books on Native American history.

Besides being a founder of the American Indian Center of Chicago, Power  was heavily involved in the activities of other Native organizations, including the Indian Council Fire, and the National Congress of American Indians where she was the youngest member upon their founding in 1944. In the early 1970's Susan became a pivotal activist in the Chicago Indian Village movement, which protested poor living conditions and inadequate job opportunities available to Native people lured into cities during the Relocation period.

"Susan Power will be missed as a founder, activist and leader of the American Indian Center of Chicago.  Her dedication, commitment and passion for the Native community will always be her legacy," Les Begay (Dine') co-founder of the Indigenous Peoples' Day Coalition of Illinois said to Native News Online.

Power received the 2012 Unsung Heroines Award from Cook County. The prestigious award was presented to her by Cook County Board President Toni Preckwinkle.