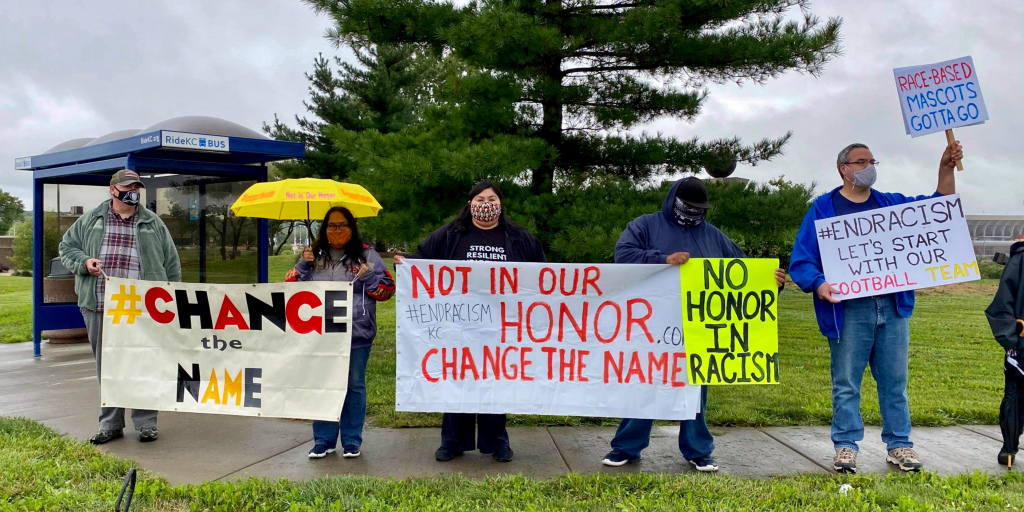 For several years, American Indians have called on the team to drop the Chiefs name.

The Not In Our Honor Coalition, an organization formed 15 years ago by a group of Native American college students at the University of Kansas and Haskell Indian Nations University, has advocated against the use of Native American imagery in sports since its inception.

In a statement released this week, the coalition said the ban on headdresses is a step in the right direction, but did not go far enough.

The decision of the Kansas City football team to prohibit fans from wearing “headdresses and face paint styled in a way that references or appropriates American Indian cultures and traditions,” this season is a step in the right direction. While it may address the more blatant racist behaviors in the stadium, it does not address the overall racism and appropriation of Native culture inherent with utilizing a race of People as a mascot. It is also a disservice to the fans. While misguided at best, the fans are trying to support their team. By identifying some behaviors as too “offensive” while reserving some behaviors (tomahawk chop) for review, the team not only robs fans of the full fan experience, they have made the determination that some racism is okay, but blatant racism is not. This is directly in opposition to the recent statements made by the NFL, team owners, management, and players about social justice.

Additionally, banning these behaviors is unlikely to stop devout fans from continuing to don headdresses and face paint in the parking lot, nor will it prevent the opposing team from racist behavior. The opposing team will still use the same offensive signs and verbiage they have used for many years, such as, “send them back to the reservation,” “scalp them,” and “Trail of Tears.”

The Kansas City’s team name was chosen in 1963 to honor a mayor nicknamed “The Chief” due to his founding of an imaginary Boy Scout Indian tribe. This occurred before the Civil Rights movement and before the American Indian Civil Rights movement in the 1970s. For decades, hundreds of tribes, national Indian organizations, and professional organizations have spoken out on this matter. In 2005, the American Psychological Association called for the immediate retirement of all American Indian mascots, symbols, images and personalities by schools, colleges, universities, athletic teams and organizations, stating “Research has shown that the continued use of American Indian mascots, symbols, images and personalities has a negative effect on not only American Indian students but all students...”

The attempt to justify the maintenance of racist mascots because a very small number of Native Americans accept it, when a majority of us vehemently oppose them is shocking. A recent study published by Sage Journals found the more connected the individual Native is with their culture (language, traditions, ceremonies), the stronger their opposition.

Lastly, with the NFL also stating they will be stenciling in “End Racism” and “It Takes All of Us” in the endzones, we call on the Kansas City team to:

Apply the NFL’s “zero tolerance” for on-field use of racial and homophobic slurs to all races and ethnic groups, especially Native Peoples.