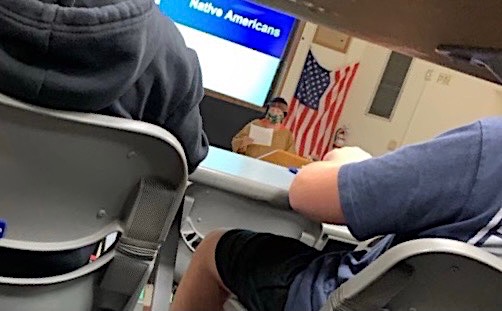 WAUSAU, Wis.—The Wausau School District’s Board of Education hosted a public forum Monday evening after one of its teachers was photographed dressing up as an “Indian” while teaching history earlier this month.

Koen Johnson, a student and a member of the Lac du Flambeau Band of Lake Superior Chippewa, snuck his personal cell phone into class to take a picture of the Sept. 22 incident, which  has many people in the region outraged.

“Students, we would like to recognize a huge mistake we made during our last large group, ‘Who Discovered America’,” the Wausau School District said in a statement on September 24. “In our attempt to create a fun learning environment, we failed to recognize a disrespectful show of the culture and heritage of the people we portrayed.”

Biskakone Greg Johnson, Koen’s father, spoke at the public forum. He confirmed that Koen had taken the photo and told Native News Online, “The school board gave us each three minutes to talk. How are we supposed to address what they allowed to happen ... in three minutes?”

The Wausau School District will not be releasing the name of the teacher involved, according to spokesperson Diana White.

The open forum drew people from around the region including high school students, educators, parents, leaders, and members of the Lac du Flambeau Band and other Tribes. Some speakers voiced their concerns about ongoing racism and dehumanization of Native Americans.

“I am outraged, and that would imply that I’m surprised, but I am not,” said Ho-Chunk Nation District 1 Representative Karina Thundercloud during the forum. “I am ashamed. First, for the teacher who did this. Second, for myself and my colleagues and the fact that we haven’t taught our neighbors that this isn’t proper.”

“These costumes and stereotypes dehumanize us,” former Wausau Board of Education member Tricia Zunker said to Native News Online. “There is a correlation between the dehumanization and the growing epidemic of missing and murdered Indigenous persons and that needs to be taught to address this ongoing issue that has plagued our communities since the settlers came.”

Many commenters expressed disappointment about the Wausau School District’s lack of a public apology and that the next generation deserves better. Native American leaders called on the school district to make changes to its curriculum and hire a diversity and inclusion manager.

The school district issued a statement on Monday night that said, “The Wausau School District’s mission is to advance student learning, achievement, and success. That’s why work is beginning in the District to review curriculum, and its delivery, to ensure it is respectful to all cultures and heritages. With these changes, the District will be providing ongoing professional learning for all staff. We are committed to ensuring all students thrive and there will be positive changes.”

“The statement issued by the school board was extremely disappointing,” Zunker said. “It says nothing.”

EDITOR:  This story has been updated to reflect the school board's statement that it would not be releasing the name of the teacher involved.