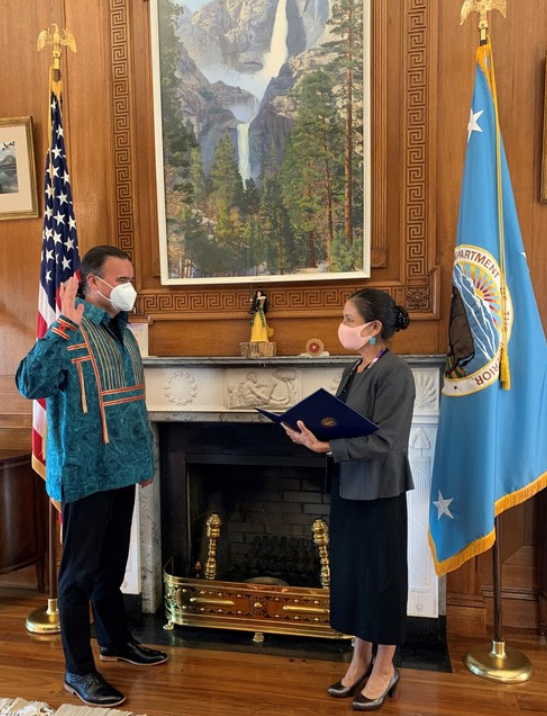 WASHINGTON — One month after he was confirmed by the U.S. Senate, Bryan Newland (Ojibwe) was ceremonially sworn in today as Department of the Interior’s Assistant Secretary for Indian Affairs.

Newland grew up in the Bay Mills Indian Community in Brimley, Mich. and served as president of the tribe before being picked in February by President Joe Biden to work as  Principal Deputy Assistant to the Secretary of Indian Affairs at the U.S. Dept. of the Interior.  He was sworn in by Interior Secretary Deb Haaland.

“Bryan has worked on behalf of Indigenous peoples and Indian Country for decades. His wealth of experience will advance the Department’s commitment to ensuring Tribes have a seat at the table for every decision that impacts them and their communities,” Haaland said. “From clean energy projects and economic development to addressing past injustices against Tribal communities, Bryan will lead with the knowledge that we best serve Indigenous peoples when Tribal governments are empowered to lead their communities.”

“I am honored to be back at the Department of the Interior working on behalf of Tribal communities and alongside a historic Secretary,” Newland said. “The Biden-Harris administration has made clear its priorities to respect Tribal sovereignty and self-governance, fulfill federal trust and treaty responsibilities to Tribal Nations, and make regular, meaningful and robust consultation with Tribal Nations cornerstones of federal Indian policy. I am committed to engaging with Tribes every step of the way and ensuring they have the support and resources they need to fully thrive.”