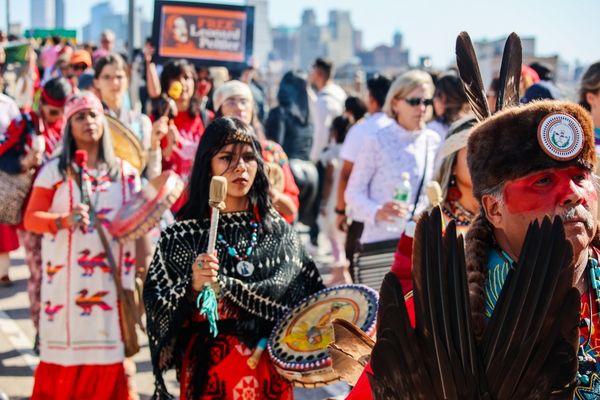 The Brooklyn Bridge was filled with a sea of red — shirts, regalia, and handprints — on Oct. 15 for the second annual walk to honor Missing and Murdered Indigenous Women and Children.

The walk, organized by New Jersey-based non-profit, Antinaco, drew up to one hundred supporters, allies and spectators to raise awareness about Missing and Murdered Indigenous Peoples, said the group’s executive director Olga Sher.

“We pretty much covered the bridge at one point,” Sher told Native News Online this week. “People just joined us in the process—strangers who were passing by. Many people stopped and asked us questions. We had posters with calls to action, so those were good conversation starters.”

The event was preceded by ceremony and speeches, including by Bitahnii Wayne Wilson (Diné), a staff member of Antinaco, who lost his daughter to human trafficking. Nakota, Lakota, and Anishinaabe tribal members also spoke.

Once the group crossed the bridge, they merged with the Ramapough Lenape Tribe in Madison Square Park. There, the state-recognized tribe was hosting its inaugural Indigenous Peoples of the Americas Parade.’

“The ending was really like a celebration of both events,” Sher said. “We are already planning next year ... for more lost voices to be heard.”