Blackfeet Chairman Calls Out DOJ, DOI, and US Senate Committee on Indian Affairs for “Horrendous Failings” in Murdered and Missing Indigenous Women Response 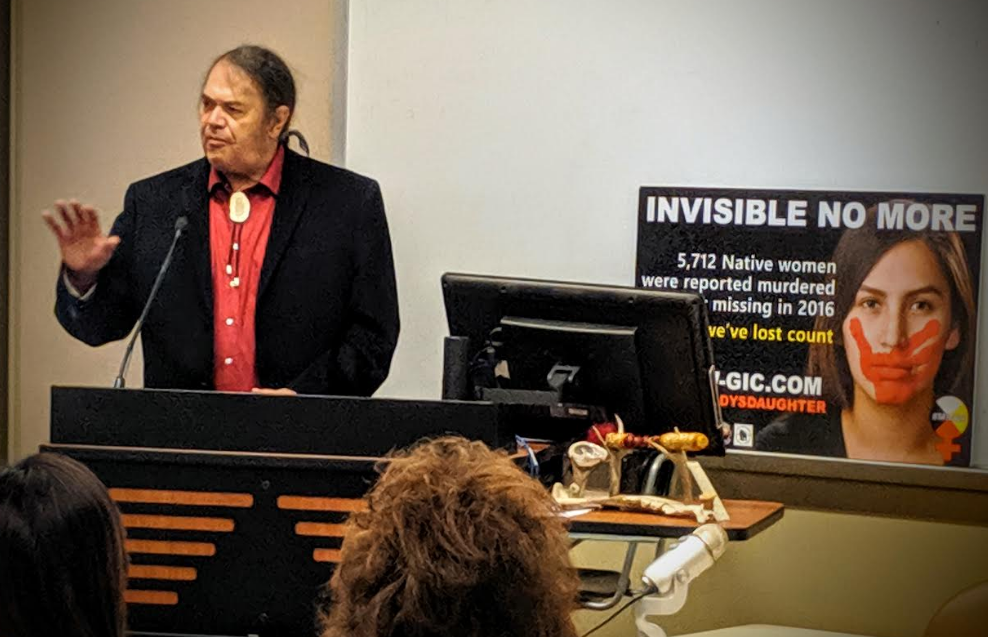 Blackfeet Nation Chairman Tim Davis today issued a searing indictment of the federal government’s consistent and continuing failures in addressing the Murdered and Missing Indigenous Women and Girls (MMIWG) crisis. Davis chose to issue his letter to Attorney General Merrick Garland, Secretary Deb Haaland, FBI Director Christopher Wray, and Senator Brian Schatz (D-HI) – chair of the Indian Affairs Committee, and puts the spotlight on the Department of Interior (DOI), Department of Justice (DOJ), and the US Senate Committee on Indian Affairs that includes both of Montana’s US Senators, Jon Tester (D-MT) and Steve Daines (R-MT).

Blackfeet Nation is Montana’s largest tribe. The state has one of the highest rates of murdered and missing Indigenous people in the United States.

In his letter, Chairman Davis also holds the media accountable: “It is a sad commentary that Gabby Petito’s life had to be taken before the national media awoke to the ongoing and generational devastation of MMIWG, and the systemic prejudice not only in the approach of law enforcement and prosecutors, but also in the media by its dereliction to give equal attention to missing and murdered women of color.”

The letter, which was made available to Native News Online, is reproduced here in full:

RE - Ashley Loring-Heavy Runner and the Appalling Rates of Unsolved Murdered and Missing Indigenous Women and Girls (MMIWG) Cases in Montana.

On December 12, 2018 Kimberly Loring-Heavy Runner testified before the US Senate Committee on Indian Affairs and shared heart wrenching details about the Loring-Heavy Runner family’s search for Ashley Loring-Heavy Runner, Kimberly’s sister. At the time, Ashley, a Blackfeet tribal member, had been missing for eighteen-months. Despite many earnest expressions of concern by US Senators on the committee, nearly three years later, there has been no apparent progress and Ashley’s case remains where it was, unsolved and languishing on an FBI hard drive.

Ashley was a vibrant 20-year-old woman when she disappeared. As Kimberly reminded the committee, Ashley matters. “We shouldn’t have to be here and plead to make us important,” she said. To that I add, Ashley continues to matter and contrary to the perceived indifference of multiple law enforcement agencies, all MMIWG continue to matter. In her testimony, Kimberly outlined some of the glaring errors and discrepancies of tribal, BIA, and FBI investigators in Ashley’s case that left the Loring-Heavy Runner family to, essentially, lead and carry the burden of the search for Ashley.

Kimberly recounts many of these horrendous failings in the MMIWG documentary Somebody’s Daughter. There is no better time to raise this matter as a new version of the film is about to be released which features President Biden. I have listened to President Biden’s words in the film, and I have little doubt that he would agree that decisive action is not only urgently needed, but long overdue. In Somebody’s Daughter, I demand an investigation into Ashley’s case, and with this letter I reiterate that, with an official request for an immediate investigation into every facet of this flawed case. I also call for a renewed focus and effort to resolve this tragic situation. The Loring-Heavy Runner family has suffered for too long.

In October 2019, President Biden sent the Vice Chairperson of his 2020 presidential campaign, Ambassador Cathy Russell, to represent him at the first-ever MMIW Tribunal held in the US, which was hosted by the Blackfeet Nation in association with the Global Indigenous Council. Two members of President Biden’s Cabinet, Secretary Haaland and Secretary Buttigieg, expressed their support for the Tribunal in letters to me and Rain, the director of Somebody’s Daughter, who was integrally involved in the Tribunal. The Global Indigenous Council, under the leadership of its president, Blackfeet tribal member Tom Rodgers, also initiated the first national MMIW billboard campaign in the US which was designed by Rain and supported by Secretary Haaland when she was a Member of Congress. This campaign included billboards raising awareness for Ashley’s case.

It is high time that law enforcement demonstrated a similar level of commitment as these individuals who have made heroic efforts to bring justice not only for Ashley, but many MMIWG victims. Montana has an appalling rate of MMIWG cases. Indigenous people account for 6.7% of the state’s population but comprise some 26% of the missing persons cases. 86% of MMIWG/MMIP cases in Montana remain unsolved. Big Horn County has the highest per capita rates of MMIWG cases in the US. The case of Kaysera Stops Pretty Places, an 18-year-old MMIWG victim in Big Horn County, has disturbing symmetry to Ashley’s case in terms of investigative ineptitude. The 2021 documentary Say Her Name is an exposé on the crisis in Big Horn County, which was made to encourage Attorney General Garland to launch a federal investigation into the situation. There is no more time to waste. The alleged recent engagement of the BIA office of Justice Services Missing and Murdered Unit is insufficient.

It is a sad commentary that Gabby Petito’s life had to be taken before the national media awoke to the ongoing and generational devastation of MMIWG, and the systemic prejudice not only in the approach of law enforcement and prosecutors, but also in the media by its dereliction to give equal attention to missing and murdered women of color. That ABC’s primetime series Big Sky appropriated the MMIWG tragedy in Montana yet erased Indigenous women and girls from its first episodes underscores the necessity for the call, Invisible No More.

In closing, the gravity of this situation requires me to reiterate that the time for platitudes and incremental measures is over. From the White House to the DOJ, to Interior, and the US House and Senate, meaningful action must be forthcoming. Good words don’t bring the missing home or justice for the victims. This tragedy is being compounded and is escalating due to inadequate and underfunded resources for law enforcement in Indian Country. As I write, some 7,000 Indigenous women, girls, and men have been reported as missing or murdered.

This past April, a 3-year-old toddler, Arden Pepion, was reported missing on the Blackfeet Nation. The following week, 26-year-old Leo Wagner was reported as missing on the Blackfeet Nation. Neither Arden or Leo have been found, and just like Ashley, law enforcement has given up. Sadly, the families of the missing are again out there looking for their loved ones without any assistance from the agencies who take an oath to serve and protect, but who instead have pathetically resigned to the notion that they can no longer do anything.

The Loring-Heavy Runner family deserves justice. Why continue to make them suffer and to feel like Ashley’s life doesn’t matter? There must be a thorough DOJ investigation into the egregious failures in this case, and a real investigation launched now to find Ashley. I welcome the opportunity to discuss ways to address these important issues of our missing Indigenous people.

The letter coincides with the release of Somebody’s Daughter (1492-) which features President Joe Biden. In the film, Davis demands an investigation into the high-profile case of Ashley Loring-Heavy Runner, an MMIWG victim from the Blackfeet Nation, whose case has suffered from “glaring errors and discrepancies of tribal, BIA, and FBI investigators.” Davis repeats the demand in his letter to the federal officials. Somebody’s Daughter (1492-) is being premiered on Indigenous Peoples’ Day in Albuquerque, New Mexico, for “Albuquerque for Indigenous Justice” in the Civic Plaza. Governor Michelle Lujan Grisham, Mayor Tim Keller, and President and First Lady Nez of the Navajo Nation are among the dignitaries who will be in attendance.