Biden to the Nation: “It’s Time for Us to Come Together as a Nation and Heal.” 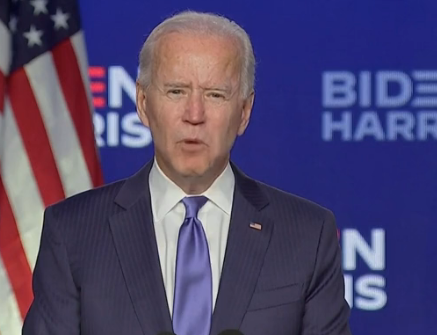 WILMINGTON, Del. — On the cusp of winning the 2020 presidential election, former Vice President Joe Biden spoke to the nation on Friday night from the Chase Center in Wilmington, Del. He was joined on stage with his running mate, Sen. Kamala Harris (D-CA).

“My fellow Americans, we don’t have a final declaration of victory yet but the numbers tell a clear and convincing story: We’re going to win this race,” Biden said.

He said the Democratic ticket were on course to win at least 300 electoral votes.

He conceded the process of waiting for the votes to be counted is frustrating, but it is important that all votes are counted.

“I know watching these vote tallies on TV moves very slow, slow, and it’s as slow as it goes,” Biden said. “It can be numbing, but never forget the tallies aren’t just numbers. They represent votes and voters.”

Realizing he will lead a divided nation that has endured the painful nine months of the Covid-19 pandemic and an economy that has left 20 million Americans unemployed, Biden spoke about the need for the nation to come together and heal.

“No matter who you voted for, I’m certain of one thing: The vast majority want to get the vitriol out of our politics. We’re certainly not going to agree on a lot of the issues — but we can at least agree to be civil to one another,” Biden said.

“We must put the anger — and the demonization — behind us. It’s time for us to come together as a nation and heal.”

He urged the nation to be patient as the winner is declared.

“Remember, we have to remain calm, patient, let the process work out as we count all the votes,” Biden said. “You know, we’re proving again what we’ve proved for 244 years in this country. Democracy works. Your vote will be counted. I don’t care how hard people try to stop, I will not let it happen.”