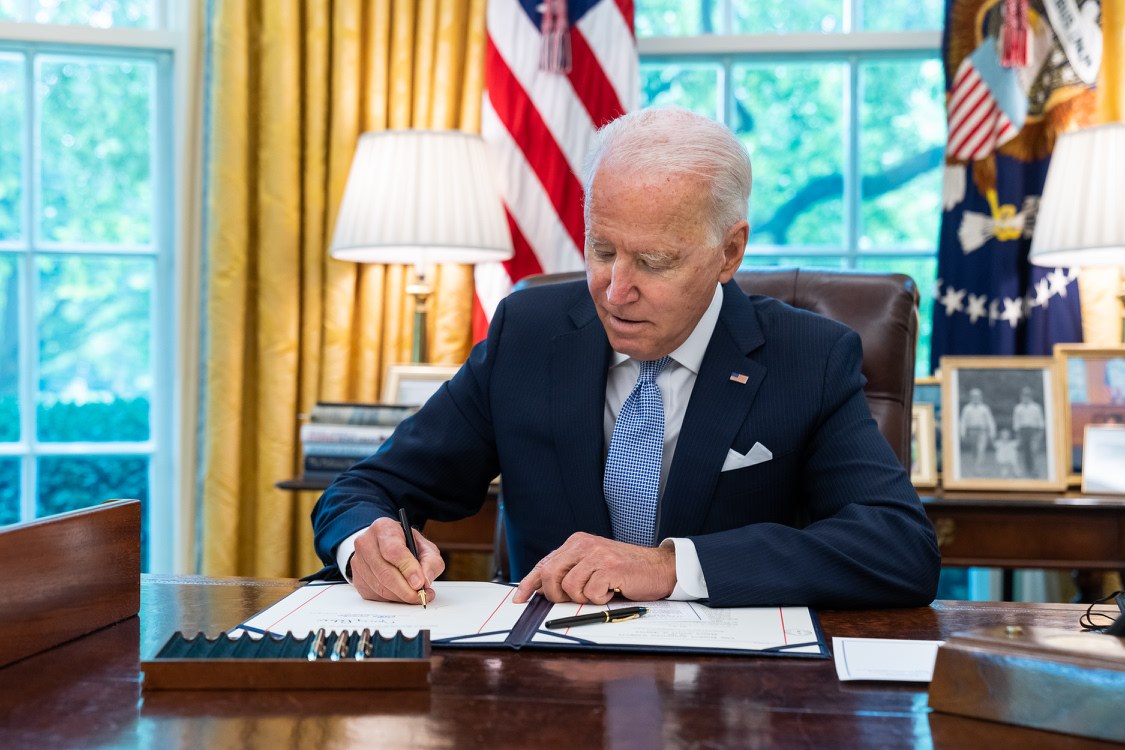 President Joe Biden already has the first-ever Native American presidential cabinet secretary in his administration with Deb Haaland, a tribal citizen of the Laguna Pueblo, serving as the secretary of the Department of the Interior. On Friday, he made another first when he issued the Indigenous Peoples’ Day proclamation.

No other president of the United States has issued an Indigenous Peoples’ Day proclamation.

A Proclamation on Indigenous Peoples’ Day, 2021

Since time immemorial, American Indians, Alaska Natives, and Native Hawaiians have built vibrant and diverse cultures -- safeguarding land, language, spirit, knowledge, and tradition across the generations. On Indigenous Peoples' Day, our Nation celebrates the invaluable contributions and resilience of Indigenous peoples, recognizes their inherent sovereignty, and commits to honoring the Federal Government's trust and treaty obligations to Tribal Nations.

Our country was conceived on a promise of equality and opportunity for all people -- a promise that, despite the extraordinary progress we have made through the years, we have never fully lived up to.  That is especially true when it comes to upholding the rights and dignity of the Indigenous people who were here long before colonization of the Americas began.  For generations, Federal policies systematically sought to assimilate and displace Native people and eradicate Native cultures. Today, we recognize Indigenous peoples' resilience and strength as well as the immeasurable positive impact that they have made on every aspect of American society.  We also recommit to supporting a new, brighter future of promise and equity for Tribal Nations -- a future grounded in Tribal sovereignty and respect for the human rights of Indigenous people in the Americas and around the world.

In the first week of my Administration, I issued a memorandum reaffirming our Nation's solemn trust and treaty obligations to American Indian and Alaska Native Tribal Nations and directed the heads of executive departments and agencies to engage in regular, meaningful, and robust consultation with Tribal officials.  It is a priority of my Administration to make respect for Tribal sovereignty and self-governance the cornerstone of Federal Indian policy. History demonstrates that Native American people -- and our Nation as a whole -- are best served when Tribal governments are empowered to lead their communities and when Federal officials listen to and work together with Tribal leaders when formulating Federal policy that affects Tribal Nations.

The contributions that Indigenous peoples have made throughout history -- in public service, entrepreneurship, scholarship, the arts, and countless other fields -- are integral to our Nation, our culture, and our society.  Indigenous peoples have served, and continue to serve, in the United States Armed Forces with distinction and honor -- at one of the highest rates of any group -- defending our security every day.  And Native Americans have been on the front lines of the COVID-19 pandemic, working essential jobs and carrying us through our gravest moments. Further, in recognition that the pandemic has harmed Indigenous peoples at an alarming and disproportionate rate, Native communities have led the way in connecting people with vaccination, boasting some of the highest rates of any racial or ethnic group.

The Federal Government has a solemn obligation to lift up and invest in the future of Indigenous people and empower Tribal Nations to govern their own communities and make their own decisions.  We must never forget the centuries-long campaign of violence, displacement, assimilation, and terror wrought upon Native communities and Tribal Nations throughout our country. Today, we acknowledge the significant sacrifices made by Native peoples to this country -- and recognize their many ongoing contributions to our Nation.

On Indigenous Peoples' Day, we honor America's first inhabitants and the Tribal Nations that continue to thrive today. I encourage everyone to celebrate and recognize the many Indigenous communities and cultures that make up our great country.

NOW, THEREFORE, I, JOSEPH R. BIDEN JR., President of the United States of America, do hereby proclaim October 11, 2021, as Indigenous Peoples' Day. I call upon the people of the United States to observe this day with appropriate ceremonies and activities.  I also direct that the flag of the United States be displayed on all public buildings on the appointed day in honor of our diverse history and the Indigenous peoples who contribute to shaping this Nation.

IN WITNESS WHEREOF, I have hereunto set my hand this eighth day of October, in the year of our Lord two thousand twenty-one, and of the Independence of the United States of America the two hundred and forty-sixth.