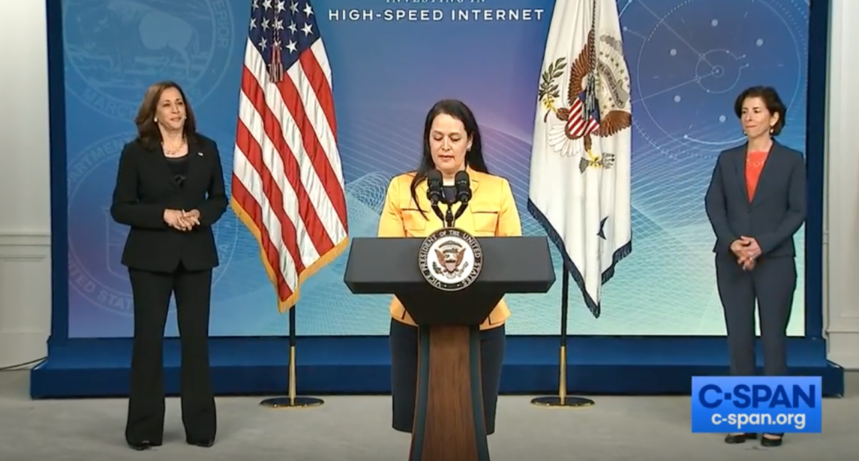 WASHINGTON — In a meeting hosted by Vice President Kamala Harris, Secretary of Commerce Gina Raimondo announced on Thursday the Biden administration would make approximately $1 billion in funding available to tribal governments, tribal colleges and universities, and tribal organizations for broadband.

On hand for the announcement was Shannon Holsey, treasurer of the National Congress of American Indians (NCAI) and president of the Stockbridge-Munsee Band of Mohican Indians, to deliver opening remarks at the White House before introducing Vice President Harris. Also, in attendance was Interior Secretary Deb Haaland, who has been a long supporter of increased broadband infrastructure in Indian Country.

“Thanks to President Joe Biden and Vice President Kamala Harris - my community and others like mine are finally being heard, and our longstanding infrastructure issues are addressed. Indian Country is 100 percent behind the Administration and looks forward to working through a strong partnership with the Biden-Harris Administration,” Holsey said. “Expanding broadband to our communities is not just a game changer - it is a life changer to tribal communities like mine and all tribal nations across the country.”

The federal government has long recognized Indian Country has substandard broadband infrastructure in every sector.

According to a 2019 Federal Communications Commission report, individuals residing on tribal lands are nearly 4.5 times less likely to have Broadband internet access as compared to those on non-tribal lands.

The lack of infrastructure exacerbated the vulnerability of American Indian and Alaska Natives (AI/ANs) to the COVID-19 pandemic and resulted in tribal communities having at times the highest rate of COVID-19 infections, hospitalizations, and deaths per capita in the United States, according to the NCAI.

In an effort to address immediate broadband needs today, the National Telecommunications and Information Administration released its Notice of Funding Opportunity for tribal governments, tribal colleges and universities, tribal organizations, and Alaska Native Corporations to access approximately $1 billion in funding for broadband infrastructure. The deadline to apply for this funding is September 1, 2021.