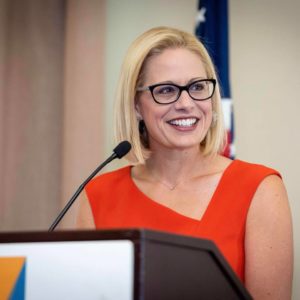 WASHINGTON — Arizona Senator Kyrsten Sinema and a bipartisan group of lawmakers from both the House and Senate have filed an amicus brief in federal court, urging the court to protect the Indian Child Welfare Act.

The bipartisan and bicameral brief was filed with the U.S. Court of Appeals for the Fifth Circuit in New Orleans as the court re-opens its August ruling, which affirmed the Indian Child Welfare Act’s constitutionality in Brackeen v. Bernhardt. The decision the Fifth Circuit issued in August reversed a ruling from the U.S. District Court for the Northern District of Texas which wrongly struck down the Indian Child Welfare Act as unconstitutional, according to a news release from Sinema’s office.

“Native American children in Arizona and across the country deserve to be able to grow up with the support of their communities,” Sinema said. “Protecting the Indian Child Welfare Act ensures tribal families can stay together.”

The amicus brief urges the Fifth Circuit to uphold the court’s previous decision affirming the constitutionality of the law.

Congress passed the Indian Child Welfare Act in 1978, after receiving testimony that 25 to 35 percent of American Indian and Alaska Native children were removed from their homes by state and private adoption agencies. The law sets best-practice standards for child welfare and adoption proceedings involving children who are members of a federally recognized tribe or are eligible for membership in a federally recognized tribe.