An Opportunity for a New Interpretation of Christopher Columbus

The protests triggered by the police killing of George Floyd have led to the removal of statues and monuments of controversial historical figures around the country. Among them are statues of Confederate figures as well as Christopher Columbus.

On Tuesday night, protesters in Richmond, Va. tore down a statue of Columbus and threw it into a nearby lake. In Boston’s Christopher Columbus Park, a statue of Columbus was beheaded. On Wednesday, members of the American Indian Movement (AIM) put a rope around a Columbus statue and toppled it head first onto a plaza adjacent to the State Capitol in St. Paul, Minnesota.

On Thursday, city officials in Chula Vista, Calif. preemptively removed their Columbus statue in Discovery Park and put it in storage before a planned protest there on Friday.

Statues and monuments have historically been erected in public places to pay homage to a significant figure.  Usually, that figure is literally placed on a pedestal.

To American Indians, Columbus is not considered a hero to be placed on a pedestal; he is considered a dishonored villain. For decades, American Indians have worked to change the celebration of Columbus Day to instead be called Indigenous People’s Day because Columbus, the man who “sailed the ocean blue in 1492,” did not in fact “discover” America. This is a constructed hoax that is perpetuated from one generation of Americans to the next. 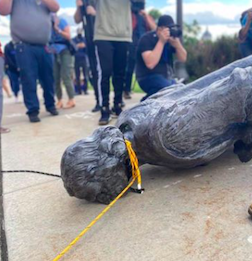 During the past several years, there has been a stunning and tragic rise in the number of missing and murdered Indigenous women in the United States and Canada. Experts argue that the shameful and all-too-common practice of sexual abuse of Indigenous women and girls is not a new phenomenon, as it is believed to have begun when Indigenous people were taken by Columbus and his men to Europe. Once there, the Indigenous females were sex trafficked.

Columbus and his actions set the foundation for the exploitation and destruction of the lands and peoples in the Western Hemisphere. Many feel justified by taking down his statue.

Yet, some people argue that removing statues and monuments of controversial figures is erasing history.

After the riots in Charlottesville, Virginia in August 2017 and the subsequent debate that ensued calling for the removal of Confederate statues, the American Historical Association issued a statement that reads in part:

“Knowledge of such facts enables debate that learns ‘from history.’ Equally important is awareness of what we mean by ‘history.’ History comprises both facts and interpretations of those facts. To remove a monument, or to change the name of a school or street, is not to erase history, but rather to alter or call attention to a previous interpretation of history. A monument is not history itself; a monument commemorates an aspect of history, representing a moment in the past when a public or private decision defined who would be honored in a community’s public spaces”

The key point here is interpretation of facts.

Perhaps, the tragic death of George Floyd and subsequent protests can bring an opportunity for constructive dialogue leading to a revised interpretation of history centered on Columbus that is more in line with reality and honors the feelings of the descendants of those he so grievously affected. Maybe there is even room to replace statues of Columbus with American Indian heroes.

On Saturday, the National Congress of American Indians (NCAI) released a statement on the removal of Columbus statues.

“This growing movement across the country to rid our shared spaces of symbols that represent hate, genocide, and bigotry illustrates that it is past time for all cities to stand on the right side of history moving forward,” NCAI President Fawn Sharp said.

America’s leadership now has the opportunity to do that — to stand on the right side of history moving forward.

Levi Rickert (Prairie Band Potawatomi Nation) is the publisher and editor of Native News Online. You may email at [email protected]