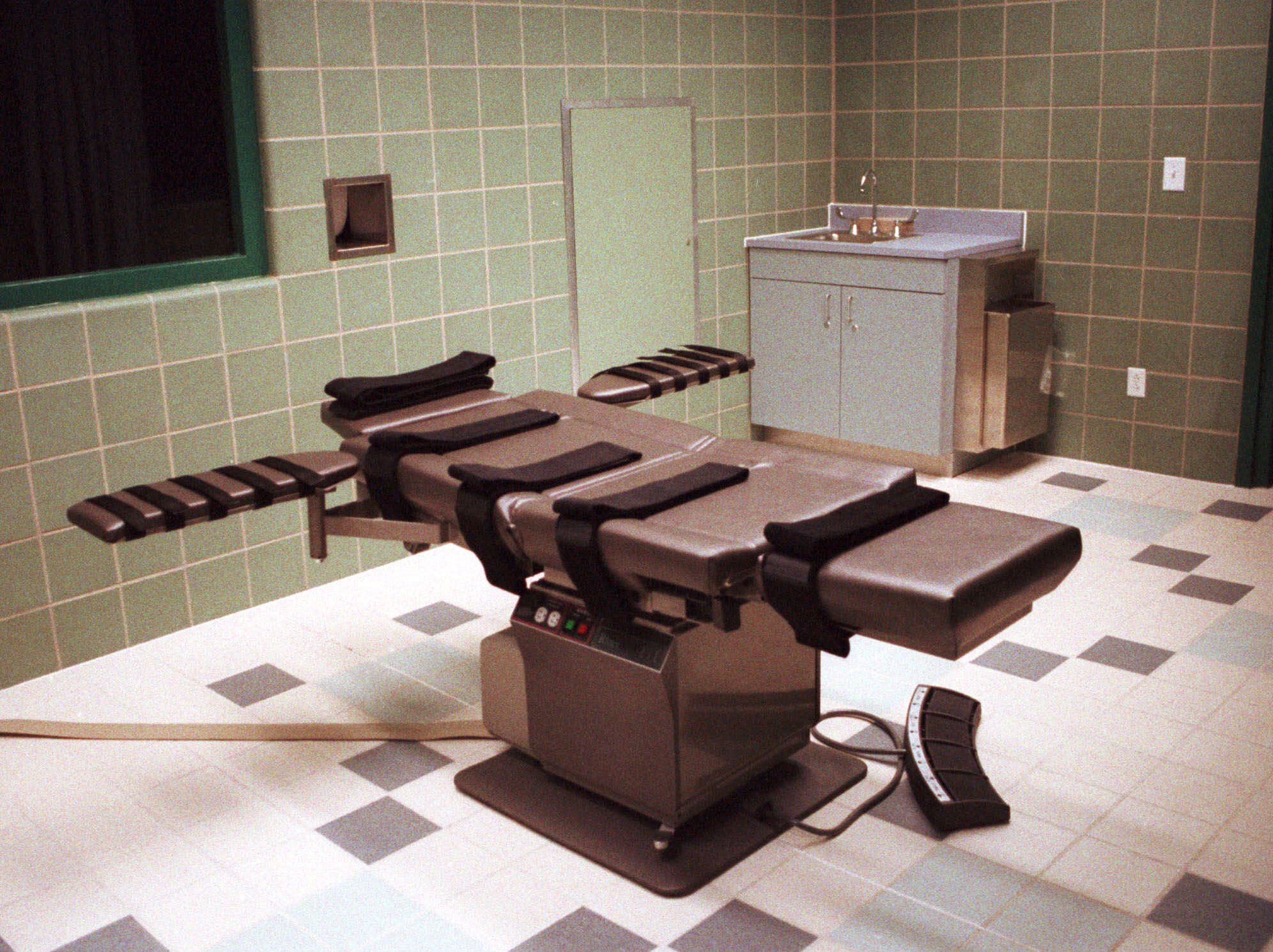 TERRE HAUTE, Ind. — For the first time in modern history, an American Indian has been executed by the federal government for killing another tribal member on a reservation.

Navajo citizen Lezmond Charles Mitchell was put to death by lethal injection on Wednesday evening for his role in the gruesome 2001 murder of 63-year old Alyce Slim, a Navajo woman, and her nine-year old granddaughter, Tiffany Lee. Mitchell's execution took place this evening in Terre Haute, Ind. at the Federal Correctional Complex, where a small crowd gathered nearby to protest and pray.  Representatives of the victims' families and the father of Tiffany Lee were in attendance at the execution.

"Nearly 19 years after Lezmond Mitchell brutally ended the lives of two people, destroying the lives of many others, justice finally has been served," Justice Department spokesperson Kerri Kupec said in a statement.

Daniel Lee, the father of nine-year old victim Tiffany Lee, released a statement via his lawyer that thanked those who investigated his daughter's murder, prosecuted the case and ensured that justice was done.  "I have waited nineteen years to get justice for my daughter, Tiffany.  I will never get Tiffany back, but I hope that this will bring some closure," he said in a statement.

"This is a sad day for family members, relatives, and friends of two Navajo families and for the Navajo Nation as a whole," Navajo Nation President Jonathan Nez and Vice President Myron Lizer said a statement issued this evening. "We offer a prayer for strength and comfort for the Slim family for the loss of two precious lives, their grandmother and granddaughter. To carry this loss for the past 19 years is difficult and we trust they can now turn to healing their family. A prayer also for the Mitchell family who endured the consequences of their son’s actions and now have lost their son. We wish there could have been a time for restoring peace and harmony for all involved in this tragic event, but we will not get that chance."

Lawyers for Mitchell decried the federal government's actions in a statement issued shortly after the execution of the Navajo man.

"Today, the federal government added another chapter to its long history of injustices against Native American people," Deputy Federal Public Defenders Jonathan Aminoff and Celeste Bacchi said in a statement. "Mr. Mitchell's execution represents a gross insult to the sovereignty of the Navajo Nation, whose leaders personally called on the President to commute his sentence to life without possibility of release. The very fact that he faced execution despite the tribe's oppostion to a death sentence for him reflected the government's disdain for tribal sovereignty."

The 38-year old Mitchell’s execution occurred despite a last-minute barrage of legal filings, pleas from Navajo Nation officials and American Indian concerns that the death sentence wasn’t proper or legal under tribal sovereignty.

On Tuesday, lawyers for Mitchell had filed a lawsuit against Attorney General William Barr in federal court in an effort to delay the Navajo man’s execution. Late Wednesday morning, a federal judge denied the request for a temporary restraining order.

The DC court’s denial earlier today followed yesterday’s decision by the Supreme Court to deny a stay of execution for Mitchell that was submitted by the Navajo Nation.

In recent weeks, Navajo Nation officials had made their case for Trump to grant Mitchell clemency on grounds of tribal beliefs and sovereignty.

“This request honors our religious and traditional beliefs, the Navajo Nation’s long-standing position on the death penalty for Native Americans, and our respect for the decision of the victim’s family,” Nez and Lizer wrote in the letter.

“We do not know the details of the decision by the U.S. Department of Justince and the U.S. attorney’s office to seek the death penalty in Mr. Mitchell’s case. What we do know is the sovereignty of the Navajo Nation and our decision, while clearly explained, was marginalized.”

“This case remains the only time in the history of the modern death penalty that the federal government has sought capital punishment over tribal objection for a crime committed on tribal land,” Navajo Nation Council Member Carl Slater wrote in the Times piece, calling Mitchell’s execution a “profound infringement on tribal sovereignty” and “a grave injustice.”

Under the 1994 Federal Death Penalty Act, Congress amended federal law to prohibit the death penalty for crimes on tribal land unless the affected tribe agreed.  The vast majority of tribes, including Navajo Nation, decided to opt out of sentences involving the death penalty.

Tribal leaders and advocates have echoed Slater’s sentiments in recent weeks, as hundreds of Native Americans and more than a dozen federally recognized tribes urged the Trump administration to respect Navajo culture and spare Mitchell’s life.

“The cultural values of Navajo Nation specifically disavow murder as a punishment. No one will be made whole by Mr. Mitchell’s execution,” writes law professor Barbara Creel on Medium.  Mitchell’s death sentence, she writes, “will be fatal not only for Mr. Mitchell, but also for the hope for healing of a Nation. It represents a death warrant for inherent tribal sovereignty and sacred tribal beliefs.”