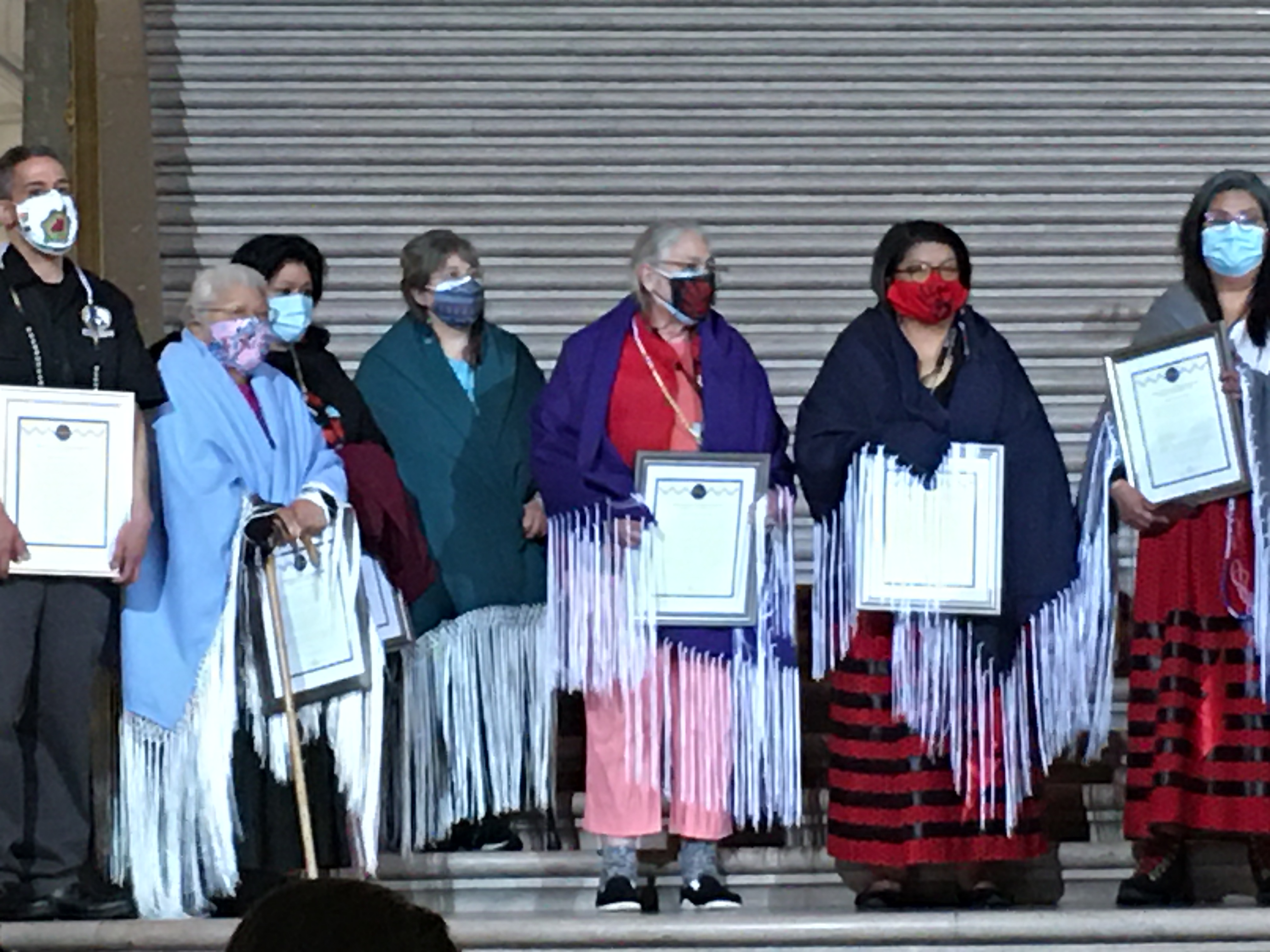 SAN FRANCISCO--Mayor London Breed, speaking at the annual American Indian Heritage Night ceremony under the rotunda in City Hall Nov. 18, announced that she would do “whatever it takes to make sure there is an American Indian Cultural Center.”

Former mayors Willie Brown and the late Ed Lee both honored and recognized the city’s Native American community, said April McGill, the Cultural Center’s executive director, but “Mayor Breed is the first mayor to give us equitable funds in order to continue work in each of our community organizations." McGill is an enrolled member of the Round Valley confederation, and is of Yuki, Little Lake, Wailaki, Pit River, and Wappo heritage.

The $3.2 million approved by Mayor Breed this year is for cultural programming and behavioral health and wellness services. The funds will provide operating expenses to support programs at the new cultural center, within the American Indian Cultural District, established in the Mission in 2019. The grant will also help the Native American Health Center, the Friendship House Association of American Indians, and the International Indian Treaty Council in San Francisco.

The American Indian Cultural Center, which has been operating online since 2016, will move into a new space in the heart of the city’s Mission District at 1863 Mission Street. It will contain both offices and space to continue current programming and begin new programs. “We are beginning a capital campaign to design a new building and purchase land back within the American Indian Cultural District,” said McGill.

Mission Dolores Park, added to the Cultural District in December 2020, was formerly the site of the Ramaytush Ohlone village of Chutchui.

This year’s American Indian Heritage night honored nine members of the American Indian Cultural Center’s advisory committee with awards for their decades of service to the community. The advisory committee made sure food was delivered to Indian families in the city during the COVID-19 pandemic, and that they had access to emergency funding through the Cultural Center. The committee members honored were Bismark Delgado (Chumash); Randy Burns (Northern Paiute/Pyramid Lake); Debbie Santiago (Washo/Osage/Latina/ Fillipina); Alberta Snyder (Washoe); Michelle Antone (Tohono O’odham Nation); Christine Antone (Tohono O’odham), whose daughter Melanie Antone accepted the award for her; Mary Jean Robertson (Cherokee Nation of Oklahoma); and Janine Laiwa (Pomo).

During the Heritage Night ceremony, members of the All Nations drum group provided honor songs. There was a flag ceremony, and exhibition Pow Wow dancers performed,  as did Round Valley confederation traditional dancers and singers. The Red Lightning Women Singers did two songs, and the noted Pomo father-and-son blues band Twice As Good played. A closing prayer was offered by Aurora Mamea (Blackfeet Nation).

American Indian Heritage Night also acknowledged the passing this year of three revered elders who dedicated their lives to the American Indian community of San Francisco. Helen Devore Waukazoo (Navajo Nation) was CEO and founder of the San Francisco Friendship House Association of American Indians, a residential alcohol and drug rehabilitation center, where she devoted her life to “putting families back together.” Janet King (Lumbee Nation) was a Native American Health Center clinician who advocated for Native Americans' rights and benefits. Violet Lundberg (Yurok Nation) was a licensed marriage and family therapist who served for 25 years at the Health Center’s Child and Family Guidance Center, and continued to serve clients after she retired.

The Heritage Night event provided a beautiful and powerful way to watch the dream of a new American Indian Cultural Center on San Francisco move toward becoming a reality.

The American Indian Cultural Center is scheduled to open in January 2022.