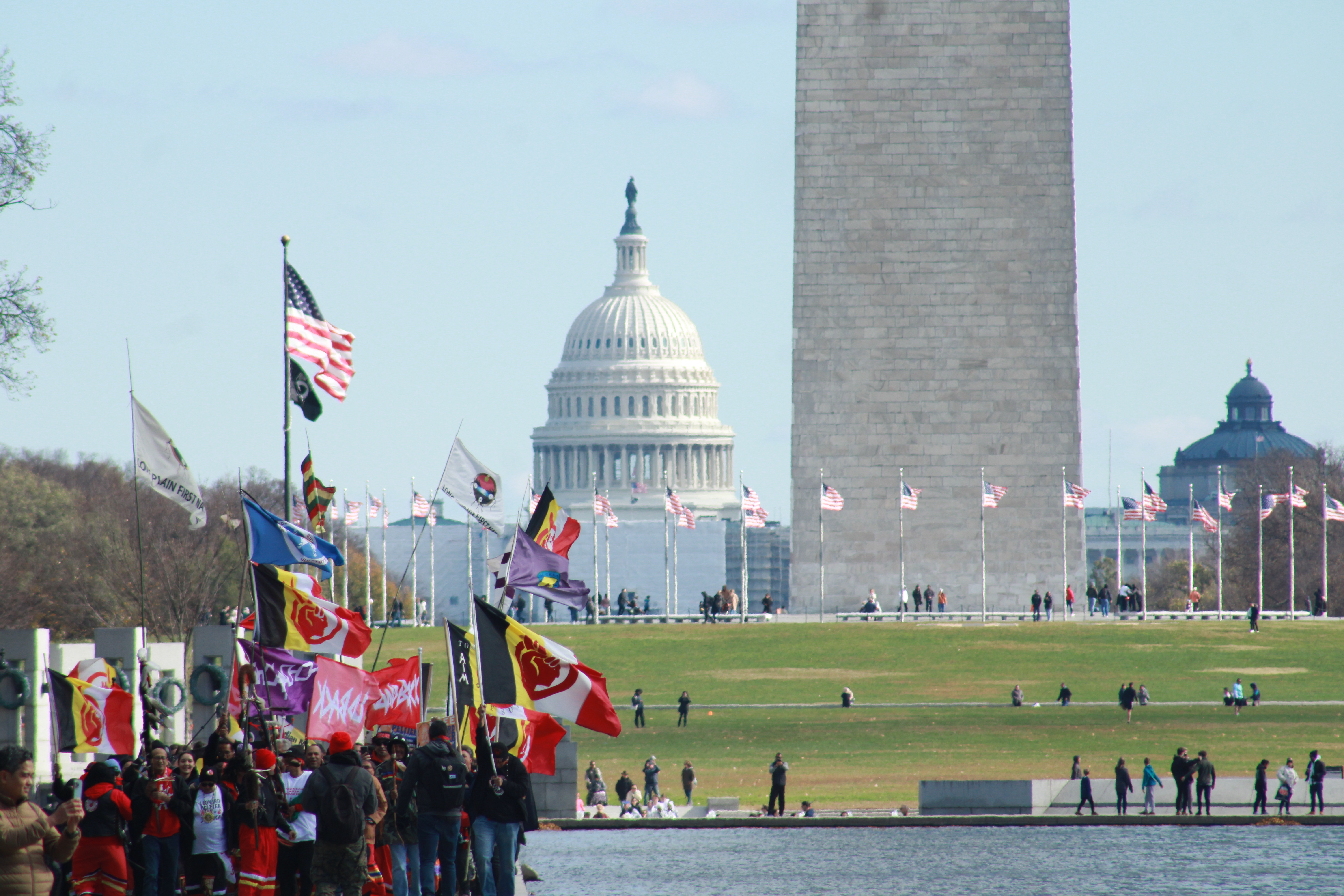 WASHINGTON— Yesterday, supporters asking for the release of American Indian Movement activist Leonard Peltier arrived in Washington and hosted a march and rally at the Lincoln Memorial.
The American Indian Movement’s Grand Governing Council (AIMGGC) began the 1,100-mile Leonard Peltier’s Walk to Justice on Sept. 1. The group completed their final mile on Sunday from the Washington Monument to the Lincoln Memorial with nearly 2,000 supporters.

Peltier was convicted in 1977 for aiding and abetting the murder of two Federal Bureau of Investigation agents on the Pine Ridge Indian Reservation in June 1975. He was sentenced to two consecutive terms of life imprisonment and has been incarcerated for more than 47 years.

“Leonard Peltier is the United States’ longest serving Indigenous political prisoner,” Dr. Nick Estes told Native News Online at Sunday’s rally. “The lawyers who actually put him in jail are here marching with us today, demanding that lawmakers and President Biden take action. Forty-seven years has been too long.”

At the time of the shootout—June 26, 1975—Peltier was an active member of the American Indian Movement (AIM), a national Indigenous grassroots advocacy group that brought attention to the racism and police brutality experienced by American Indians in all sectors of society.

AIM was involved in the Wounded Knee occupation, a 71-day siege between the U.S. Marshalls Office, the FBI, Oglala Lakota tribal members, and AIM members demanding a Department of Justice investigation of the local tribal government. Afterward, more than 1,200 American Indian people were arrested for participating in the siege, which left one FBI agent paralyzed. Later, all those arrested had their cases dropped due to governmental prosecutorial misconduct.

Madonna Thunder Hawk, a decades-old AIM member, leader and veteran of the Wounded Knee Occupation of 1973, said at Sunday’s rally, “It’s been a long haul. We’ve been with Leonard since back in the day.”

The Leonard Peltier Walk to Justice started in Minneapolis, where AIM was founded. The idea of the walk began several years ago, in dreams of walk organizer and AIM chapter director Rachel Thunder. She said she had vivid dreams of seeing Peltier worrying in his prison cell about getting out.

“I felt it was my duty as a former United States attorney to see that justice was done for Leonard,” Reynolds told Sunday’s crowd. “Because, at this point, enough is enough. Justice, at this point, is compassion for Leonard. What Leonard had done was not what I felt, that 30 years later, he should still be sitting in prison, and that was ten years ago. It is my duty as a U.S. attorney representing the people of the United States who are asking for justice and justice for Leonard.”

The rally included an opening prayer by Fred Desjarlait; honor songs sung by a drum group led by AIM Founder Clyde Bellecourt’s son Crow Bellecourt and Minneapolis AIM drum keeper, Vin Dion; a dance performance by an Aztec dance group; and presentations by many Peltier supporters including his daughter, Kathy Peltier. Music was performed by Robby Romero and Mitch Walking Elk, who performed at U.S. federal prison at Leavenworth, where Peltier was imprisoned for many years. He is currently imprisoned at Coleman Federal Correction Complex in Coleman, Florida.

“The President of the United States needs to grant clemency for Leonard Peltier,” Kevin H. Sharp, former U.S. District Judge and one of the attorneys currently representing Peltier, said on Sunday. “Sign the piece of paper. End this.”

This week, advocates have various meetings scheduled with the Department of Justice in Washington, D.C., asking for clemency for Peltier.