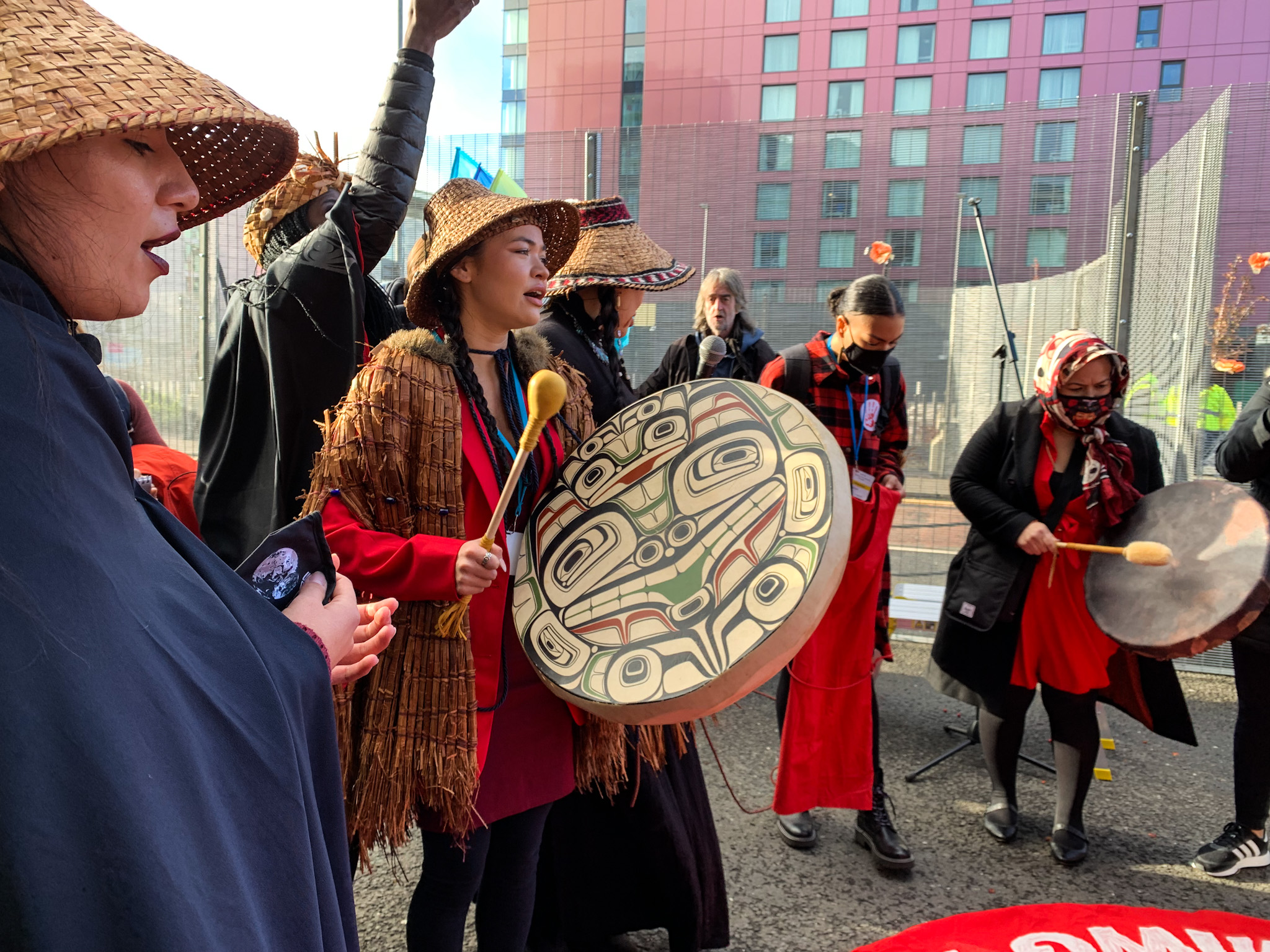 At the 26th annual United Nations Climate Conference (COP26) held in Glasgow, Scotland, 197 nations and territories are meeting to discuss and implement solutions to climate change. Outside the formal meetings, activists connected environmental issues to the issue of missing and murdered Indigenous women, girls, and two spirit individuals.

COP26 is split into two sectors: The Blue Zone and the Green Zone. The Blue Zone is only accessible to political officials and accredited individuals or organizations and is held at the Scottish Event Center (SEC). This is where the large discussions and negotiations regarding climate change take place. The Green Zone is where other organizations and individuals can showcase the work they have done and plan to do, without being a part of any major decision making.

On November 9th, a group of Indigenous peoples led a demonstration inside the Blue Zone, the most exclusive part of COP26, that continued as a rally just outside the barricade into the SEC. Together, they walked out of the SEC singing and drumming in solidarity and remembrance of all missing and murdered Indigenous women, girls, and two spirit individuals (MMIWG2S). These specific groups of people are often targeted for violence, especially near rural places of resource extraction, such as oil fields and mining camps. At the rally, Indigenous women marched and delivered speeches detailing these tragedies and emphasising the importance of acting to stop the violence. 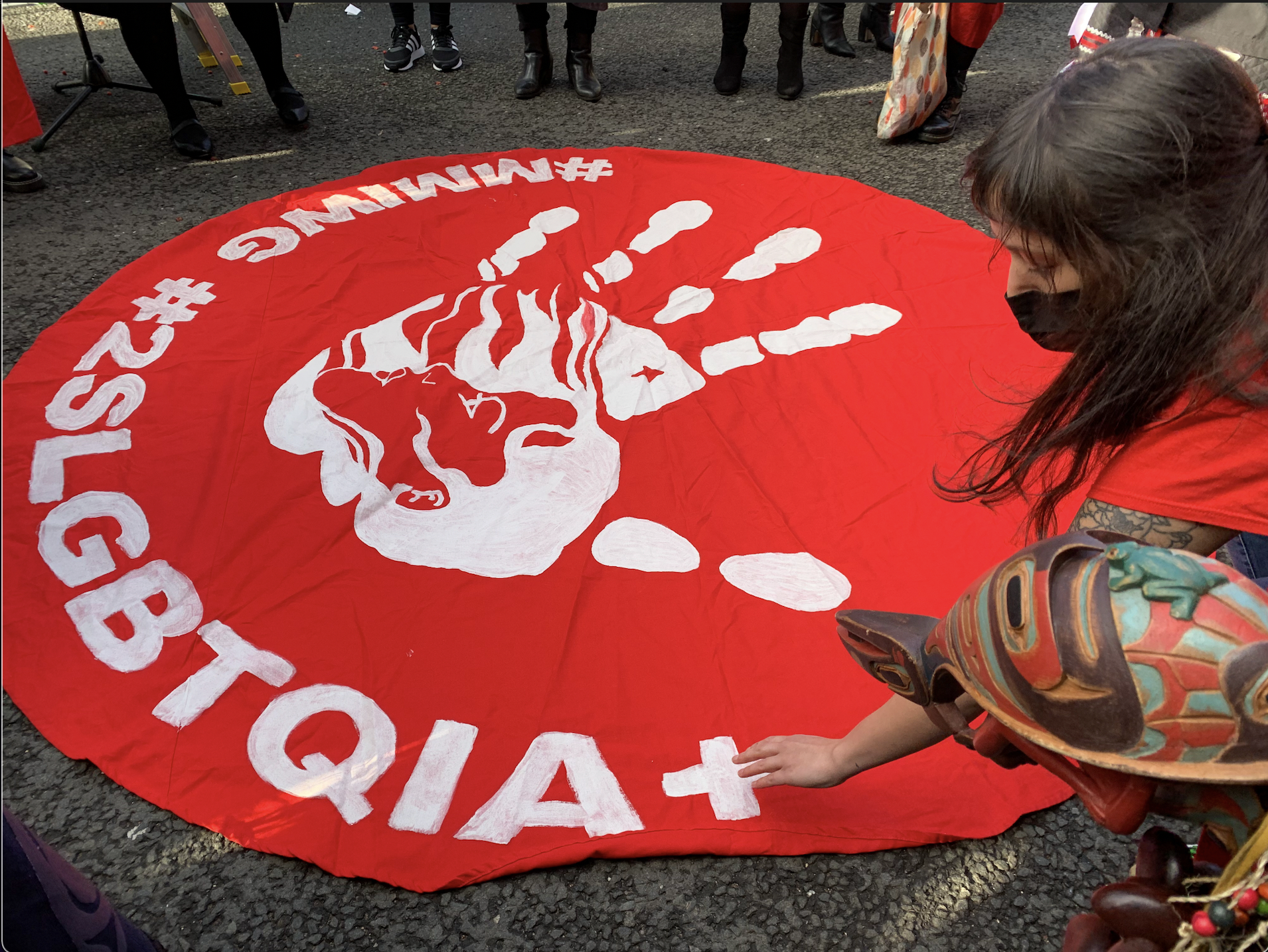 Circular banner displaying a handprint, a common symbol for the MMIWG2S movement. The banner was carried out with the marchers and placed on the ground to create space for keeping the area in front of the platform open, and to give the audience a clearer view of the speakers during the rally. (Photo/Leala Pourier) 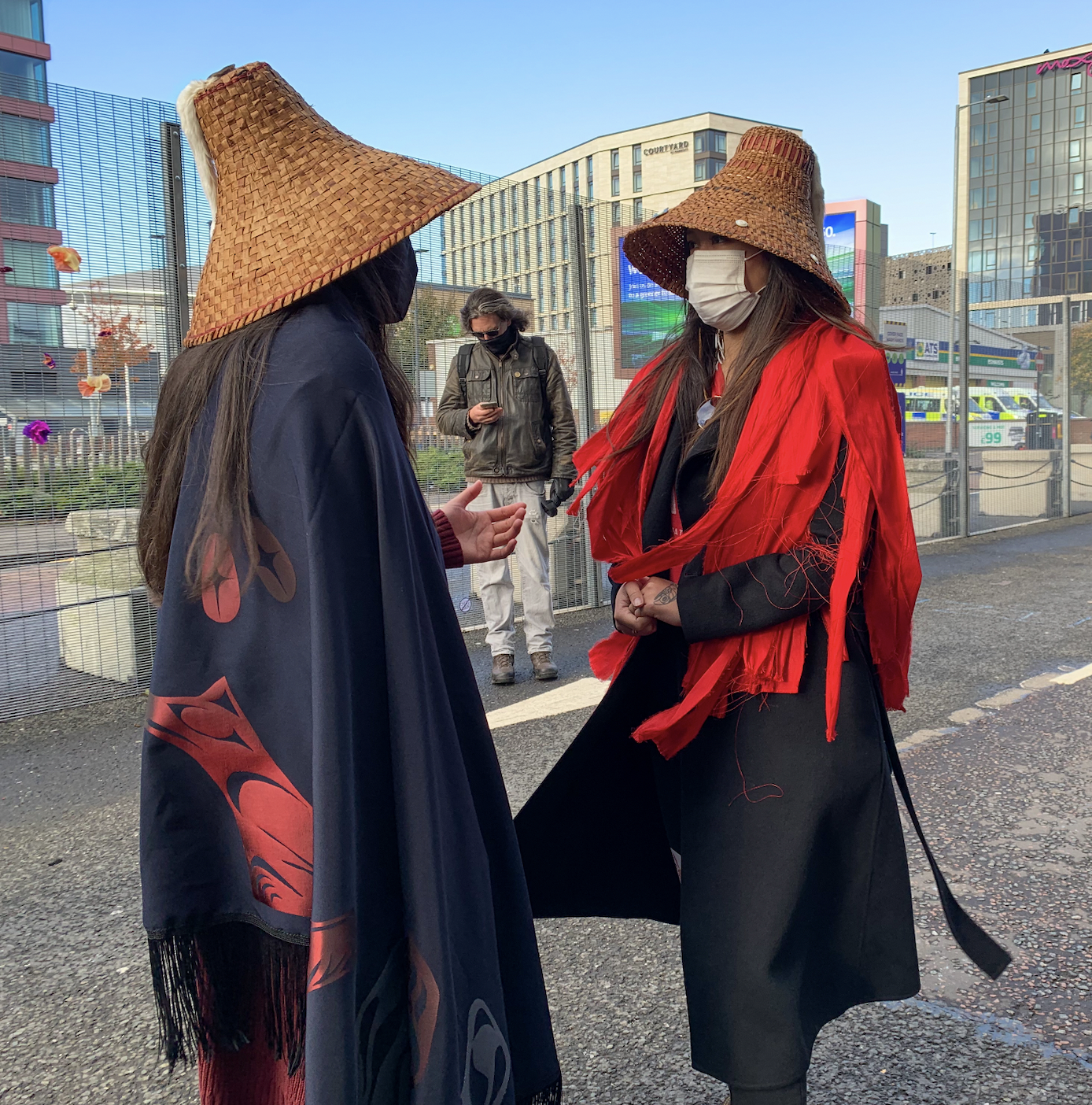 Two young First Nations women talking prior to the rally. The color red is often used in the imagery and messaging of MMIWG2S. (Photo/Leala Pourier) 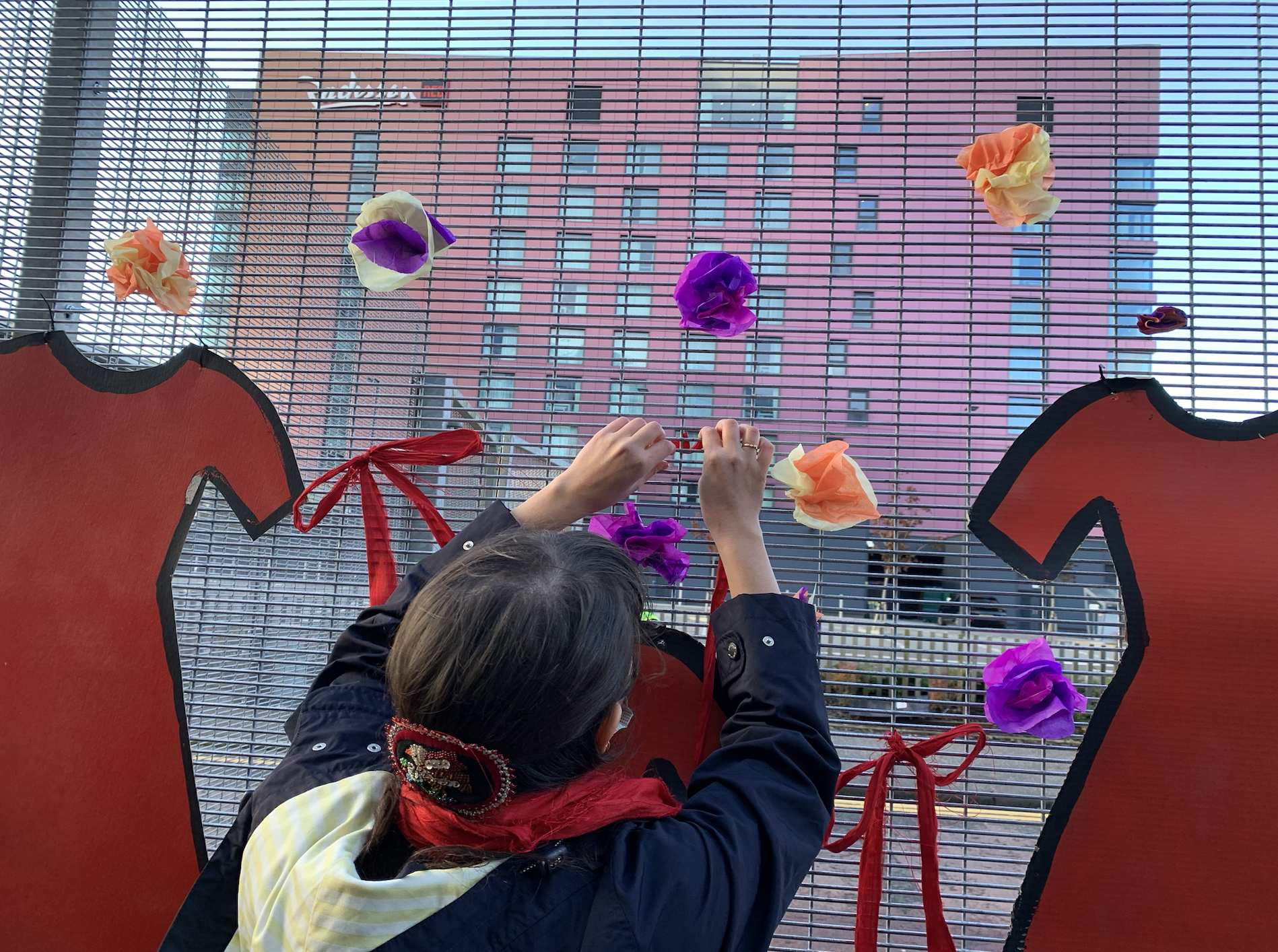 Indigenous woman tying red fabric to the fence, creating an impromptu memorial for all the missing and murdered Indigenous women and girls. (Photo/Leala Pourier) 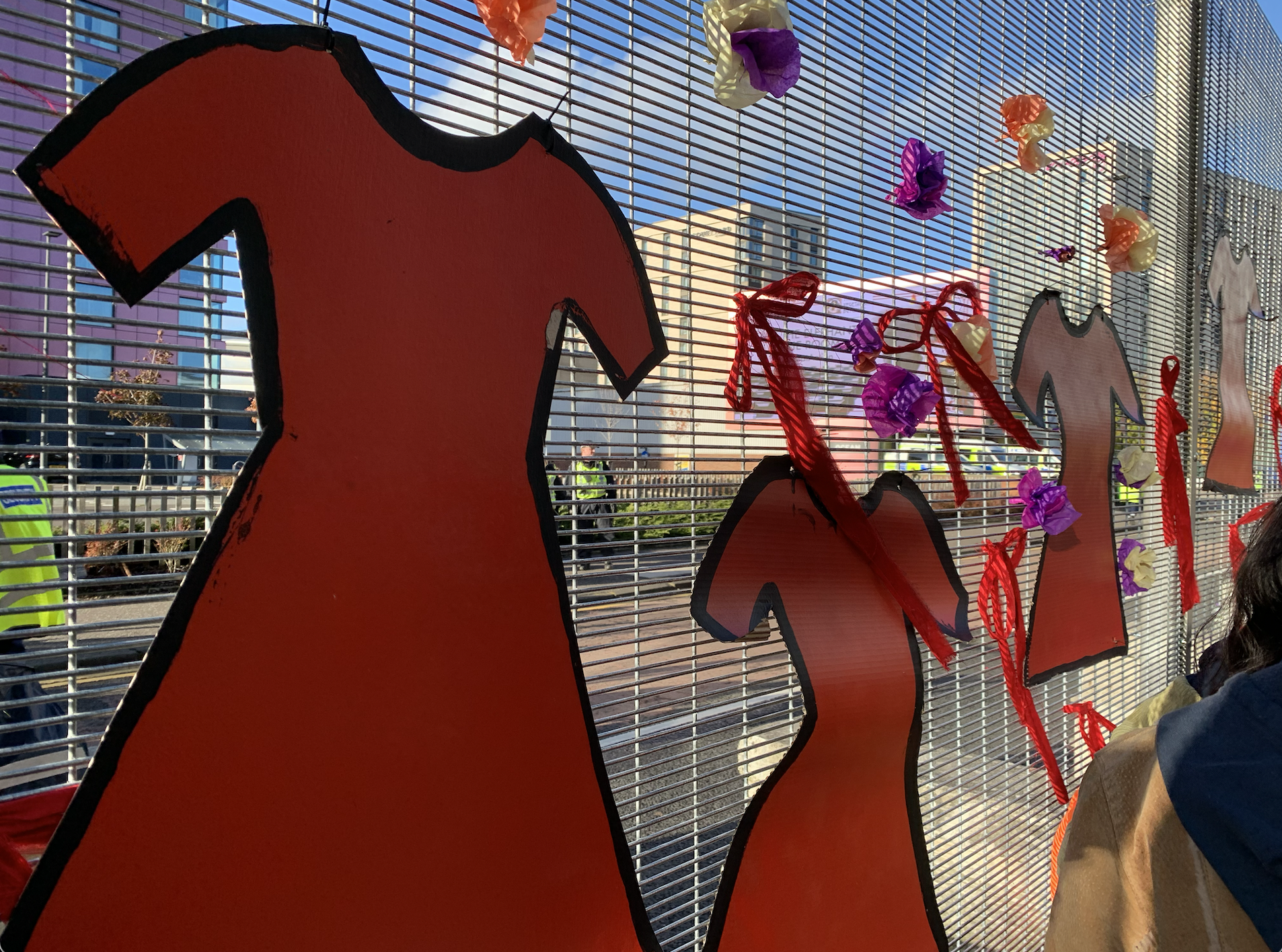 Temporary memorial on the barrier fence of the Blue Zone for all the missing and murdered Indigenous women, girls and two spirit individuals. (Photo/Leala Pourier) 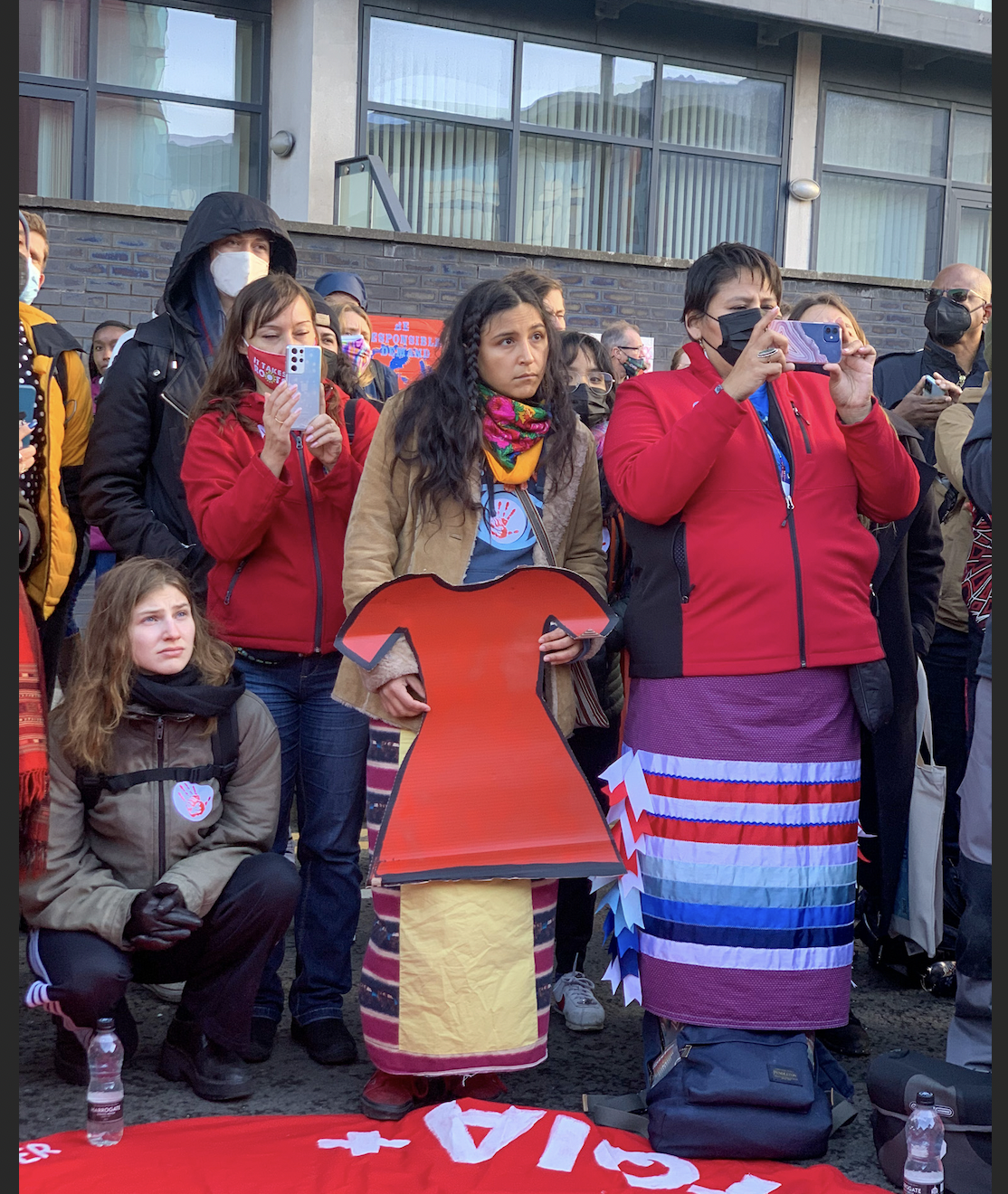 Crowd reacting to a speech on the impact of oil drilling on Indigenous communities. (Photo/Leala Pourier) 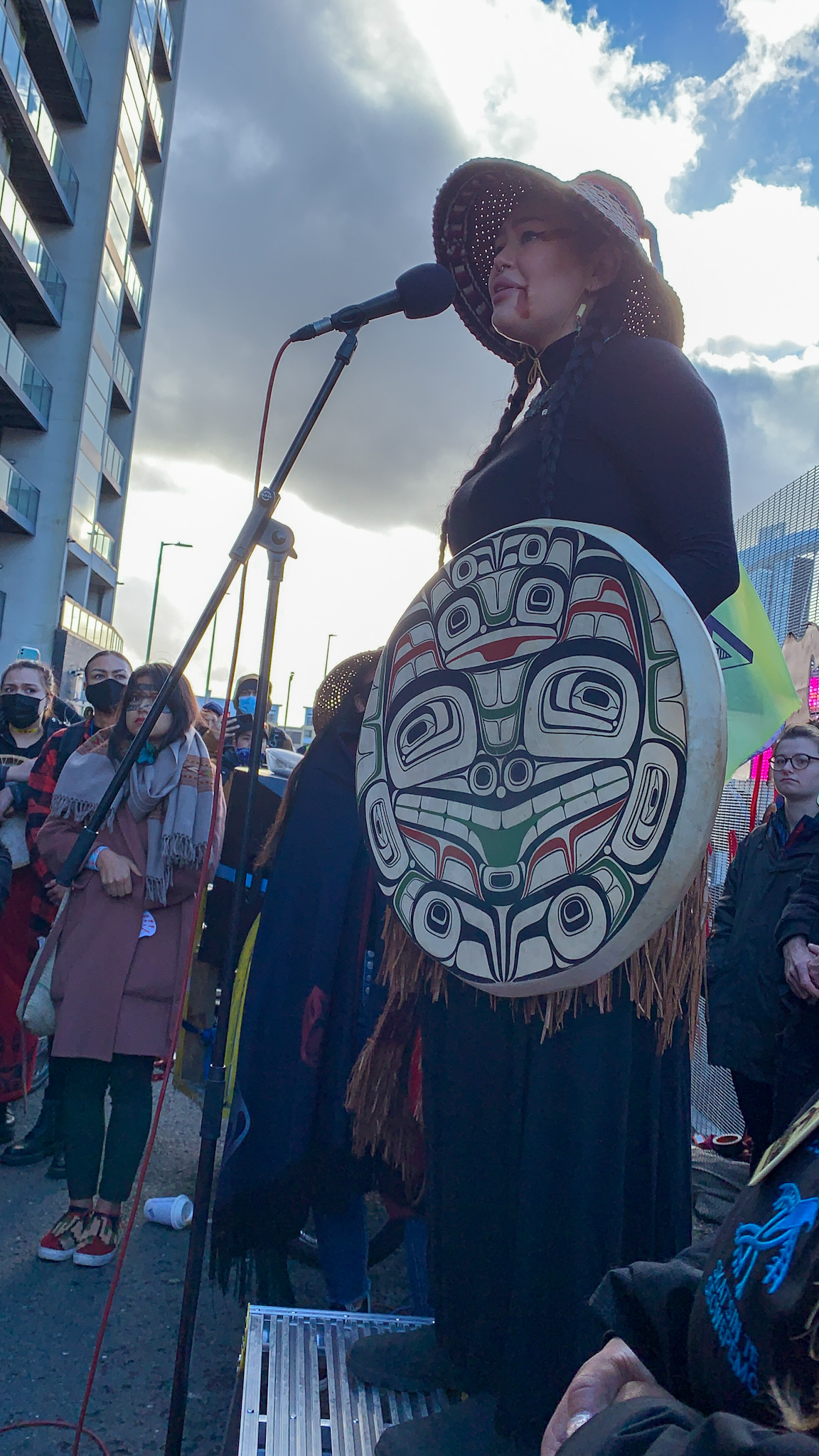 First Nations woman delivering speech on the risk she faces being a land defender in her community. (Photo/Leala Pourier) 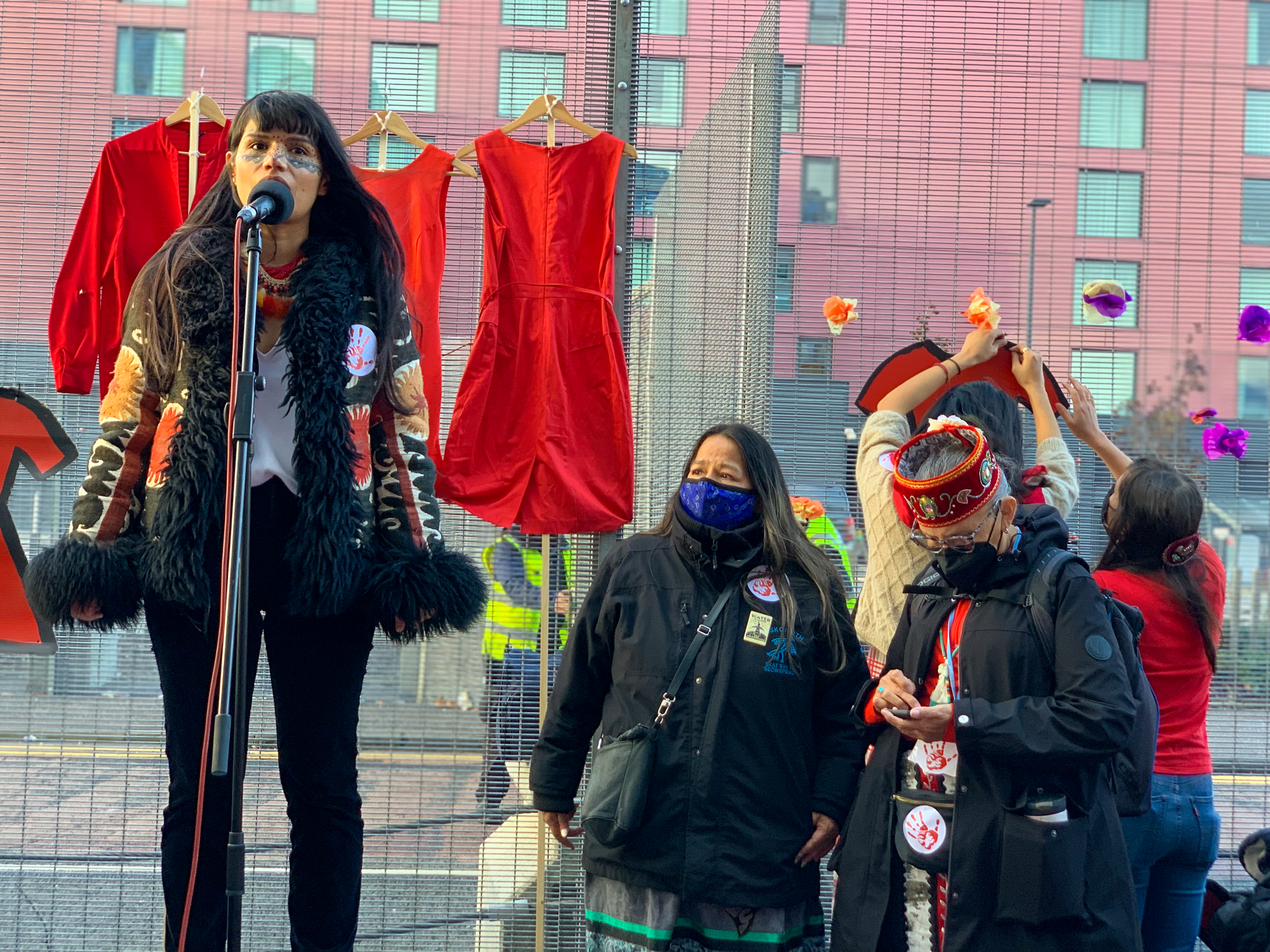 Indigenous woman delivering a speech on the danger of defending land in Canada and the constant fear of going missing. (Photo/Leala Pourier)

Donate
Free Newsletter
About The Author
Author: Leala PourierEmail: This email address is being protected from spambots. You need JavaScript enabled to view it.
Breaking News