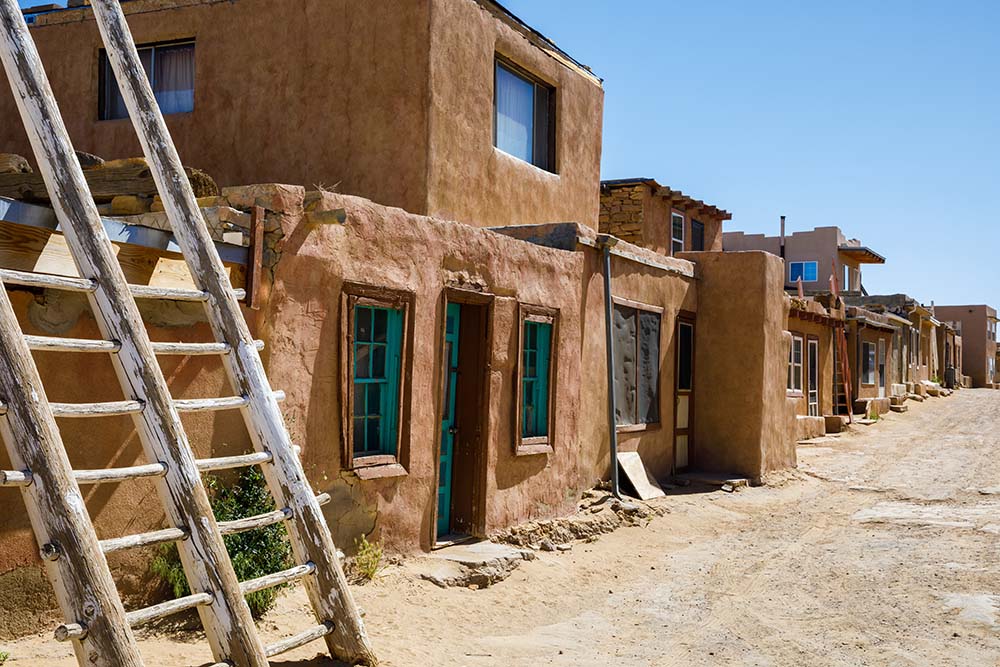 ACOMA PUEBLO, N.M. — For one of Indian Country’s oldest living communities, knowing when to isolate and when to engage has kept the Acoma Pueblos and their traditional practices alive and thriving.

Nestled on top of a mesa about 60 miles outside of Albuquerque, N.M. sits the legendary Acoma village known as Sky City, which has established roots since 1150 AD. The tribal community is known for their adaptation while preserving their rich heritage by limiting site accessibility to mostly tribal members. Many tribal citizens live off the reservation and it is crucial to tribal officials to be able to provide a sense of belonging for them.

In spite of the pandemic, Acoma’s tribal government and community organizers made a conscious decision last week to make its traditional Feast Day a virtual and modified in-person celebration.

“Covid has had a significant impact on us being true Acoma. Many tribal members don’t have access to engage with families properly,” said Acoma Governor Brian Vallo and former director of the Indian Arts Research Center (IARC) at the School for Advanced Research.

“What’s really important as tribal leaders is to maintain communications with all ages. We have all different ways to maintain engagement during this time.”

Earlier this year, event organizers recognized that the closures were taking a toll on the mental well-being of many citizens. Elders expressed loneliness and longing to hear and see traditional songs and dances. The organizers decided to utilize virtual platforms to send the message that strength and patience will ensure their survival, as well as to provide much needed connection to the community.

New Mexico is home to 19 different Pueblo tribes and have strict etiquettes for visitors to follow. Of the various cultural events that take place in Acoma, there are typically three that are open to non-tribal members to observe and partake, including feast days. These special events grew in popularity and attract between 8,000 to 10,000 visitors, which includes approximately 5,000 community members.

Feast days have been celebrated since the 18th century and are considered a time of renewal for tribal members to immerse themselves in culture, language and religion. This cross-cultural mix of festivities combines Native practices and ceremonial dances with Catholic mass and prayer.

The Acomas’ close ties to the Catholic Church dates back to approximately 1629, when the San Esteban del Rey Mission Church was constructed. The architectural design intermingles Pueblo and Spanish Colonial styles and is considered the oldest surviving European church in New Mexico. Both Sky City and the mission are registered historical landmarks and offer guided educational tours throughout the year, which have been closed to the public since mid-March.

Known for his historical preservation work, Vallo led a multi-million-dollar campaign to rehab the old Mission, which continues to be in use today. This church has become an integral part of the San Esteban Feast Day that occurs in early September to honor their patron saint and commemorate harvest dances.

This year, the modified celebration featured some on-site activities interspliced with live and pre-recorded videos. Partnering with tribal member Jonathan Sims and his production company, No Reservations Productions, the village was able to provide accessibility to the festivities via YouTube streaming.

“It speaks to our resilience and core values of Acoma people,” Vallo said of the necessary adjustments to the celebration. “Our name itself means ‘to prepare.’ Preparing a place for future generations is ingrained in our minds. We are reassessing how to prepare and what we will do to ensure that our lives are more in balance.”

On Sept. 2, the Feast Day kicked off with an acknowledgement in the Acoma dialect of the Keres language, then proceeded with a mass by Father Gerry at the Mission church. Prayers and messages of remaining strong and positive during these challenging times resonated through the service.

“The virus could kill us, but hatred and ongoing resentment can also kill us,” said Fr. Gerry during mass.

The event continued to feature music by the St. Joseph’s children’s choir, a greeting in Keres from Gov. Vallo and his lieutenant governors, as well as recorded messages from a variety of Pueblo of Acoma (POA) staff and government officials from a myriad of locations, including Congresswoman Deb Haaland (Laguna Pueblo) and U.S. Rep. Xochitl Torres Small.

“Even though we are not meeting in person, we are still celebrating together,” said Haaland.

Drum songs played as a slideshow followed the video compilations, which highlighted the New Mexico landscape, architecture, agriculture, cuisine, and past and present images of the Acoma community. The streaming video ended with a Buffalo Dance Group performance by Vernon Howeya and his family. 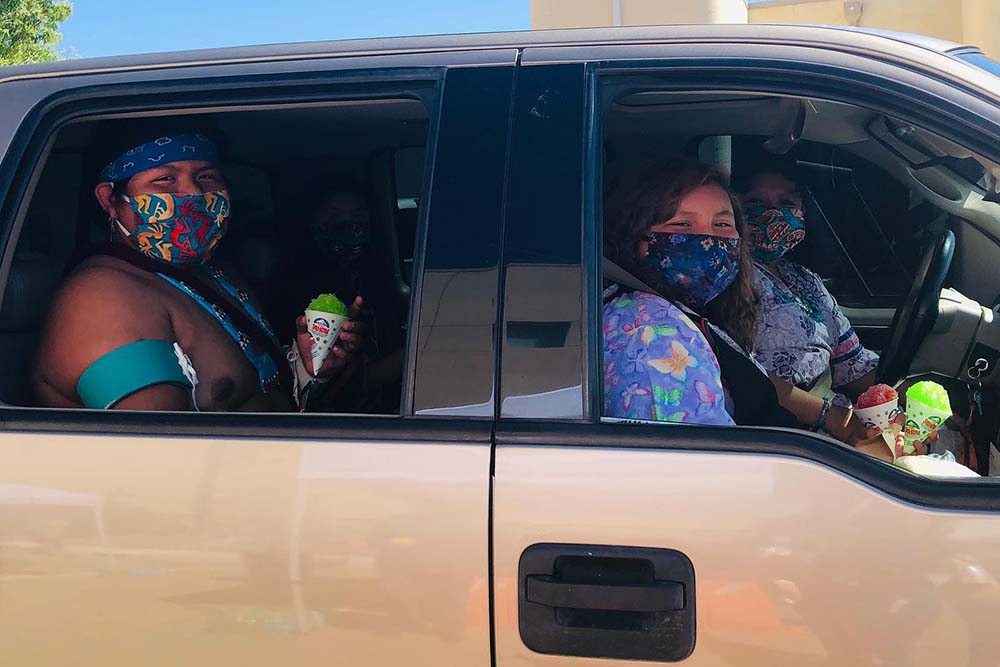 Volunteers handed out snow cones in Sky City, one of three villages that make up Acoma Pueblo, N.M., during the tribe’s virtual Feast Day. (Photo by POA Health & Human Services Division via Facebook)

There were nearly 1,300 YouTube viewers (1,700 in total) who were able to partake in the virtual experience while volunteers in Sky City handed out food and provision distributions. More than a hundred volunteers passed out snow cones, hot dogs and cleaning and sanitary care packages to residents from around the region, who waited in their cars for nearly three hours.

Keeping up with social distancing practices, families were reported celebrating and dancing in their front lawns.

“It was wonderful to see community members dressed in traditional attire, blasting Acoma songs from their cars,” Vallo said.

“A result of the virtual feast reminded us all that while we used technology, the core of the Feast Day was about the people. To hear songs, the language, see the dances and pray.”

Having withstood nearly a thousand years of opposition and suppression, Acoma continues their efforts to preserve and adapt so future generations can hold onto their cultural significance and overcome hardships, especially the Covid-19 pandemic.

Thus far, the tribe has only had 42 reported cases of Covid-19, including four deaths. During the virtual event, Vallo announced that there were zero positive cases as of that week, but he said there are still challenges ahead and that there is concern for some neighboring towns and counties.

“Ancestral knowledge teaches that [viruses] are living beings, and we acknowledge and respect that those beings exist,” Vallo said.

“Through prayer, we hope that it retires soon, but it forces us to reevaluate and reconsider our being during this time. I really hope we consider these things and remember that our core values don’t differ that much from other cultures.”