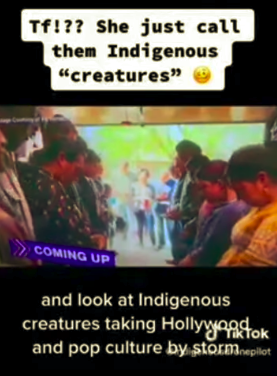 The mistake has been corrected, and the news company hasn’t issued an explanation to the error, which was captured and published on TikTok by user @indigenousdronepilot.

“I was taken back when I first seen it, but not surprised,” Brooke Waukau (Johnson), whose TikTok handle is @indigenousdronepilot, told Native News Online. “For outsiders looking in, that misuse of words could look like a harmless mistake, but for Indigenous people it is a reminder of the mistrust and broken relationship we have with the media.”

As of press time, the video has had more than 730,000 views, thousands of shares, and social media is abuzz with memes, comments, and posts.

Native Hoop Magazine posted on its social media today, defending the ABC News story about Native American Heritage Month. “That clip of ABC News calling us indigenous creatures is taken way out of context,” Native Hoop Magazine wrote on its Facebook on Friday. It shared a link to the network’s publication of the story and its title includes “Native American creators.”

The ABC story was about Native American people involved in the creation of several hit shows such as Reservation Dogs and the movie Prey.

“We don’t want them to honor us once a year for Native American Heritage Month,” said Waukau, who’s also a MMIW Task Force Coordinator for the Wisconsin Department of Justice. “We want them to do their job all year round and run stories on our missing men, women, and children.”

CORRECTION: A previous version of this article erroneously named 20/20 anchor Amy Robach as the anchor who referred to Native Americans as "Indigenous creatures." The ABC reporter who made the reference is Kyra Phillips.