A dramatic voice over, spoken by the actor who portrayed the legendary Luke Skywalker, declares: “The force is strong with the Navajo.” The voice over by Star Wars actor Mark Hamil is part of a new public service announcement (PSA) made to support Navajo Nation in its fight against COVID-19. 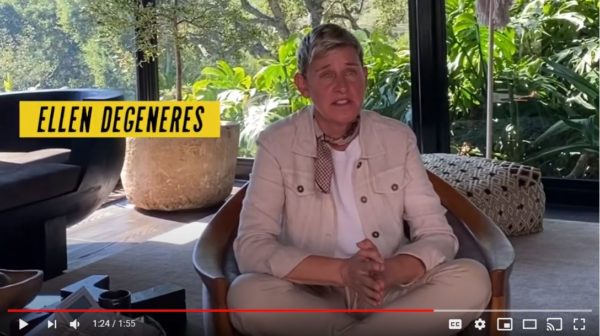 Ellen DeGeneres is one of many stars speaking up in the #NavajoStrong movement. (courtesy photo)

The new campaign also includes another video that asks healthcare workers from across the United States to come to Navajo Nation, volunteer and help ease the burden on the Nation’s overworked frontline workers. The PSA series also calls for donations to raise funds and PPE for the tribe’s frontline medical professionals and community members. It also provides needed encouragement to the Navajo people, who are living in a COVID-19 hotspot and still waiting for stimulus funding. The hashtag tied to the PSAs, #NavajoStrong, was created so the world can send messages of love, strength and support to the Navajo Nation as it fights the pandemic. “​We are incredibly grateful that our allies are helping bring national attention to how the health and resource disparities that have resulted from centuries of colonization, oppression and genocide are threatening our lives every day,” ​said Young, the initiative’s co-creator. ​“​We are hanging on to what is left of our communities and cultures and we’re asking for support as the first peoples of this land.”