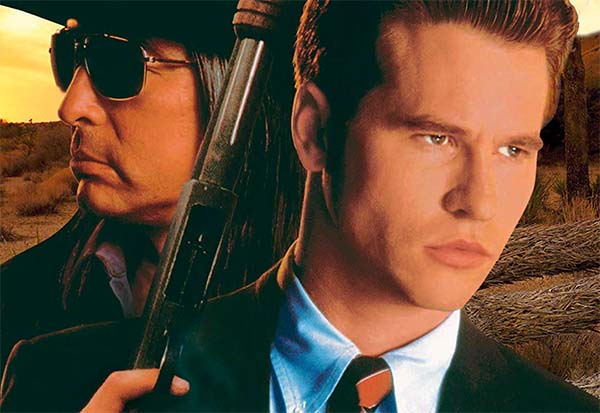 Welcome to Native News Online’s weekly column highlighting arts, entertainment and cultural events taking place all across Indian Country. Every Thursday morning, we deliver a round-up of festivities you might want to check out, if they’re happening in your area or if you’re traveling.

Today, we talk about a new Native film series, and a quick breakdown of some upcoming Powwows.

LOS ANGELES – Red Nation Celebration Institute (RNCI) has partnered with Lumiere Cinema at the Music Hall to host a monthly film series soley spotlighting the work of Native Americans. The opening happens today (March 5), and features screening of both Thunderheart (1992) and American Holocaust 2000 (2015). For times and tickets, click here. “Los Angeles is the largest population of Urban American Indians,” said RNCI’s Joanelle Romero. “The American Indian and Indigenous community is a growing force across Los Angeles and the global economy, tapping into this pool of talent is overdue. Our new groundbreaking partnership with Lumiere Cinema at the Music Hall provides an ongoing platform for Native stories.”

Following the screenings, the “Ask An Indian” conversation series will feature a panelist from the entertainment industry.

“We are thrilled to be partnering with Joanelle Romero of RNCI Red Nation International Film Festival on this historic film series,” said Lauren Brown, founder of Lumiere Cinema. “It’s very important to us that we showcase films from a wide array of diverse cultures, so starting off with Native films is a unique and great opportunity for us.”

The Lumiere Cinema at the Music Hall is located at 9036 Wilshire Blvd., Beverly Hills.

“Wezhichigewaad” (pronounced “way-zhih-chih-gay-wahd”), an Ojibwe word meaning “makers,” and it couldn’t be more fitting of a title for this open-to-all show. While the show is rooted in rich cultural history, lifelong bead artists Stillday (Red Lake Nation) and Morris (Leech Lake Band of Ojibwe) push traditional indigenous designs into new contemporary compositions—while still honoring the symbolism and wisdom of their elders.

Watermark hosts the opening reception, featuring both artists, March 6 from 5 to 7 p.m. Light refreshments will be served. The artists will talk at 6 p.m. For those who can’t attend the opening, the exhibit remains on display through May 30, 2020.

Watermark, which is open and free to the public, is located at 505 Bemidji Avenue N., Bemidji. For more information, call (218) 444-7570 or visit watermarkArtCenter.org.

Algoma University, Anishinaabe Initiatives (AI), and the Shingwauk Anishinaabe Students’ Association (SASA) welcome everyone to “indulge in Native culture and customs” at the 15th Annual Gathering at the Rapids Pow Wow. Admission and parking are free, and all events are open to the public.

Grand entries happen Saturday at 1 p.m. and 7 p.m. and Sunday at Noon. A feast will be held Saturday at 5 p.m. There will also be an assortment of Anishinaabe crafts and traditional food vendors onsite.

All are welcome to attend the Apache Gold Casino Powwow, happening March 7-8, at the San Carlos Event Center. Hundreds of dancers and singers from across the region and country will compete for thousands of dollars in prize money. Organizers describe it as a “joyous celebration of life, music, and culture.” There are two sessions of gourd dancing and intertribal dancing on Saturday (Grand Entry at 1 p.m.), followed by one session of each on Sunday (Grand Entry at Noon).

Family fun that includes drumming, singing, dancing, crafts, Native food and the Native American Flute Circle. Entry is $5 per person. Admission is free for attendees 7-and-under and 65-and-over. The Lawilowan American Indian Festival was established in 2007, with “the goal to continue the tradition of the Native American culture and heritage through various channels.” (EDITOR’S NOTE: Have an arts and entertainment tip? Contact Rich Tupica at [email protected])