THE NEWS OF THE WORLD: Abducted and Erased by Hollywood’s White Saviors 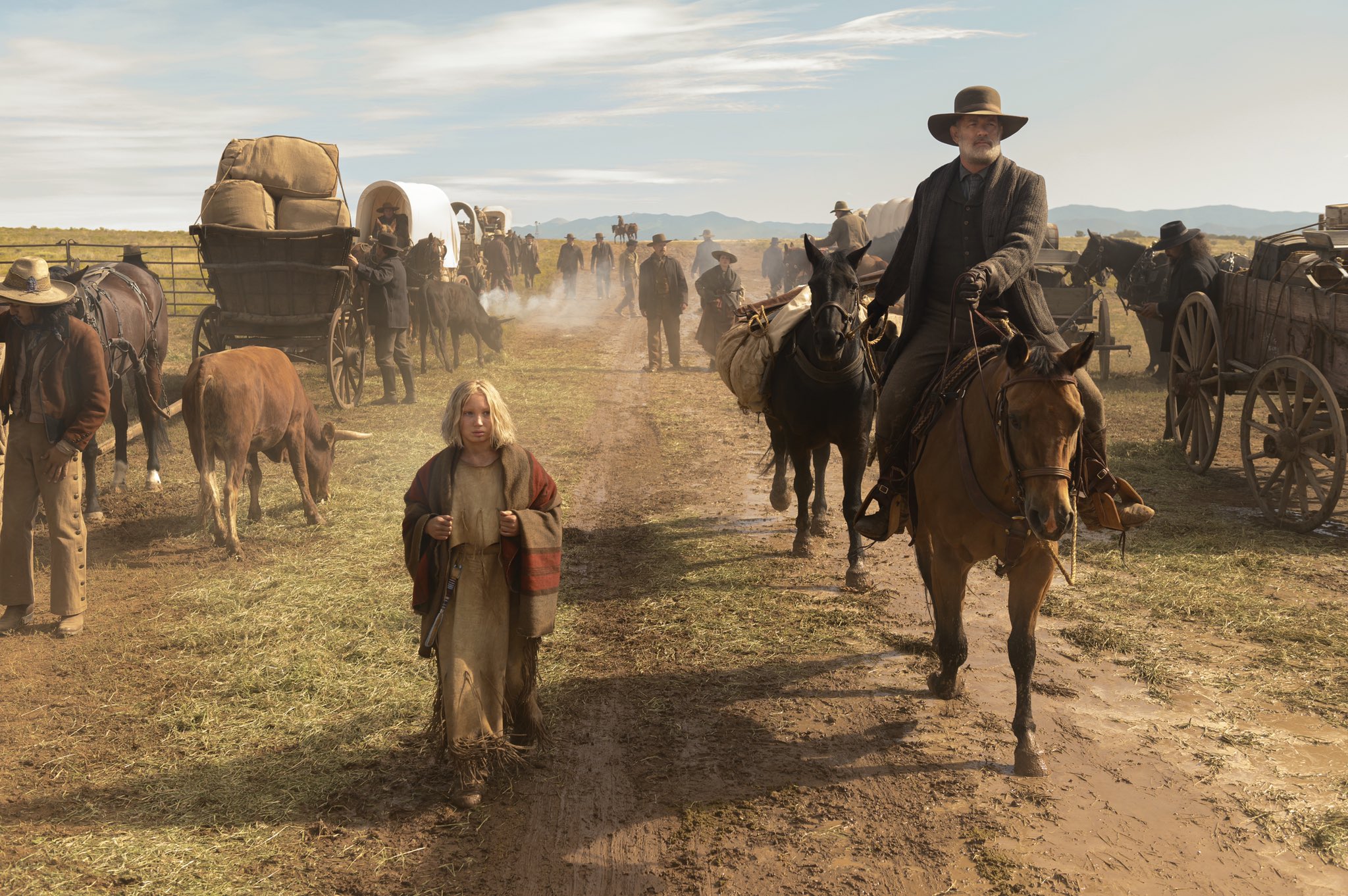 Universal Pictures’ Golden Globe and Oscar nominated film "News of the World" seizes Native American history and identity to tell yet another Euro-American fantasy of America’s fabled Wild West, this time stripped almost completely of American Indian presence. I admit I like the Tom Hanks starring Paul Greengrass (writer/director) movie as a piece of popcorn entertainment, but I also recognize the genocidal damage the production and its creators perpetuate. News of the World repackages Native American child abduction, ethnic cleansing, forced assimilation, and war trauma to conjure a fictional frontier tale of whitewashed western expansionism stripped of Indigenous people. This ongoing trend within the corporate entertainment industry is not hard to see. In fact, in this case, the producers simply built on the source material, a novel of the same name written by Paulette Jiles.

With News of the World, Greengrass, Hanks, and Universal Pictures replace the hidden cultural genocide of our nation’s American Indian boarding schools with a passing mention of “agency schools.” In the film, the dreaded “agency schools” are never clearly defined but represent an existential threat from which Hanks’ benevolent character “Captain Kidd” must save 11-year-old "Johanna," a Caucasian girl raised by Kiowa Indian “raiders.” The real history of the theft of Native American children away from their parents, overseen by the U.S. military, is rejected in favor of Johanna’s mysterious orphaning from her adopted Kiowa family. News of the World embezzles actual events to promote a favorable fictional narrative of westward expansion free from Indigenous complications. Johanna’s chosen exotic Kiowa language is embraced and later hybridized by Hanks’ Kidd in a benevolent act of cultural sharing. This, of course, differs from America’s historic (and present-day) practice of stigmatizing people who speak languages other than English. Hanks’ warmhearted Captain Kidd conceals true history from living Native and non-Native American audiences - horrifying accounts of American Indian children beaten mercilessly and killed for not successfully assimilating to the forced reeducation campaigns of their Euro-American handlers.

Kiowa filmmaker Adam Piron notes that Universal Pictures’ Oscar-nominated film has merely two scenes with Native American people. Under scrutiny, the movie contains only one scene with American Indians. The other scene replaces Kiowa Indians with digital doubles in the far distance striking poses reminiscent of “The Trail of Tears” folklore. In this “Oscars So White” recovery era, Hollywood boasts of its diversity, equity, and inclusion progress. However, according to studies by UCLA and USC, this progress remains mostly cosmetic. Systemic racism continues behind-the-scenes with a lack of minority writers, directors, producers, and studio executives. The problem is worse with News of the World. Not only are creative decision-making positions void of American Indians but the on-screen depictions are also computer generated. In the first scene, the production couldn’t be bothered to hire Indigenous background players and, in the second scene, the Native Americans hardly utter a word. In entertainment industry lingo such performers are referred to as “under five (lines of dialogue)”; individuals who the production can consider day-players and pay less. It's a win-win for the production’s financial bottom-line.

News of the World is not the only current Hollywood production to erase Indigenous people and abduct their stories. To construct a familiar police procedural narrative, Disney-ABC Television’s primetime series Big Sky, produced by industry veteran David E. Kelley, expunges Native American people from their reservation land and appropriates their present-day tragedies of missing and murdered Indigenous women. Kelley’s drama is set on lands adjacent to my tribal homelands, the Blackfeet Indian Reservation in northwest Montana. When asked to expand his series’ narrative to include the ongoing plight of Indigenous women, Kelley rejected the idea and smugly informed the concerned parties to be sure to spell his name correctly - Kelley, with two “e’s."

From Johnny Depp’s turn as the stereotypical “Tonto” in Disney’s The Lone Ranger to Kevin Costner’s blatant casting of Asian American actress Kelsey Asbille Chow to perform as an American Indian in his series Yellowstone (produced by the Paramount Network), “red-face” performances have become all too common in Hollywood. The industry’s powerful labor organization SAG-AFTRA not only sanctions such performances but also wrongfully states that it is illegal to acknowledge and request proof of tribal enrollment when hiring American Indian actors. The U.S. Supreme Court has ruled numerous times that it is not illegal to acknowledge or request proof of tribal enrollment, yet SAG-AFTRA knowingly continues to spout their false interpretation of the law and block enrolled tribal members from participation. SAG-AFTRA, WGA, casting directors, corporate studios, and self-identified Hollywood Indians all promote this deceptive, discriminatory, and illegal mindset. Such systemic racism allows blatant red-face performances to strip away the humanity of American Indians in favor of stereotypes that embrace “leather and feather” conventions that relegate living Native Americans, on-screen and in our shared society, to background filler.

Sadly, several minority filmmakers follow Hollywood’s Euro-centric lead. New Zealand’s Taika Waititi is writing and producing "Reservation Dogs" for FX, a television series about contemporary American Indian life, and African American filmmaker Ava Duvernay is doing the same for NBC with her series titled "Sovereign." It seems Native Americans are incapable of telling their own stories. Duvernay has partnered with a longtime Sundance Institute devotee who touts the idea that he and the famed film festival have mentored over a hundred “Indigenous” filmmakers. The pressing question is - so, where are they? Indeed, if there are scores of American Indian filmmakers out there, why can't the Sundance Institute cite more than one film in its history written, directed, and produced by Native Americans that received mainstream distribution? Here, “Indigenous” is a slippery term used to justify negating the U.S.’s tribal populations in favor of promoting Australian, Canadian, Central and South American, and New Zealand filmmakers.

In this past presidential election cycle CNN covered the voting status among Asian, Black, LatinX, and White populations. American Indians were erased, lumped into a demographic hodgepodge CNN named “Something Else.” Many other demographic measurements - education, health care, both UCLA’s and USC’s Hollywood diversity reports - similarly erase Native American people. Hollywood’s white saviors, even if/when they are minorities themselves, are comfortable erasing American Indians from our mainstream media landscape for personal gain. This abduction is nothing new. It’s just depressing that the Golden Globes and the Oscars carelessly celebrate this ongoing cultural genocide in our current era most especially while they trumpet diversity, equity, and inclusion improvements. It feels all too convenient and familiar that the original people of this land are so acutely absent and invisible in this past award season - a time of giving out prizes and heralding all the progress made.

Dr. Myrton Running Wolf holds masters degrees from NYU’s Tisch School of the Arts and the University of Southern California's School of Cinematic Arts as well as a Ph.D. in Theater and Performance Studies from Stanford University. He is an enrolled member of the Blackfeet Indian Reservation.