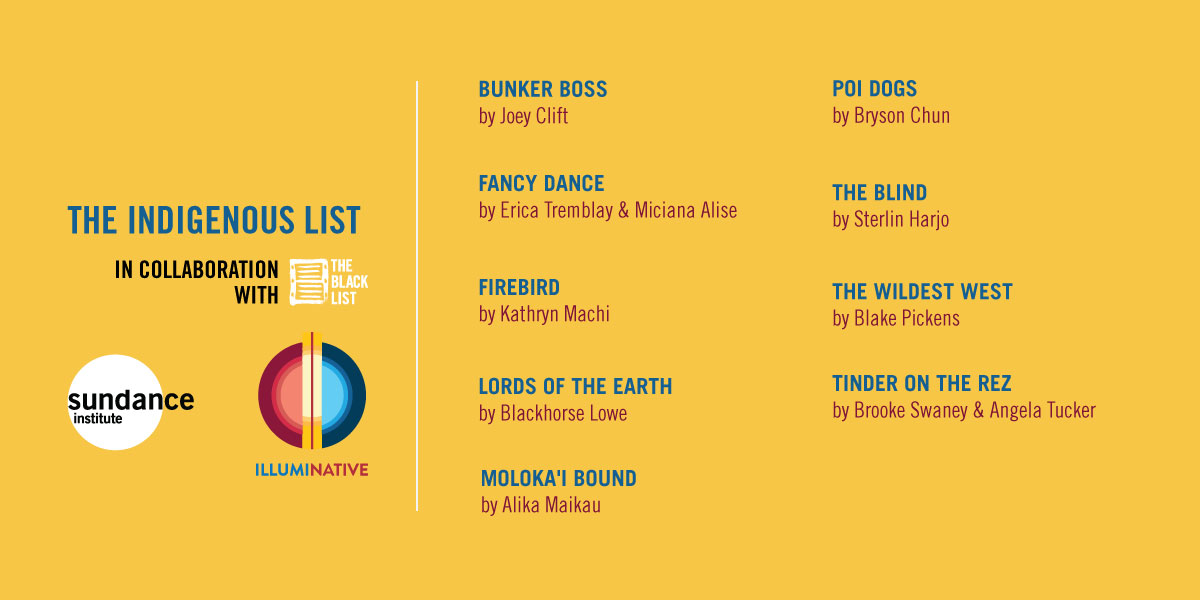 LOS ANGELES — The Black List, an annual survey of Hollywood executives' favorite unproduced screenplays, announced Tuesday the nine scripts selected for the inaugural Indigenous List, which highlights the best Indigenous film and television writers working in the United States. The Black List worked in collaboration with IllumiNative and the Sundance Institute.

Eligible writers were able to submit their scripts for consideration to blcklst.com from June 24 through Sept. 27, 2020. Scripts for both feature films and TV pilots were accepted by Indigenous screenwriters working within the United States.

“IllumiNative is proud to partner with the Sundance Indigenous Program and The Black List to showcase the immense talent of Native writers,” Crystal Echo Hawk (Pawnee), founder and executive director of IllumiNative, said in a statement. “These writers, and the more than six dozen other scripts submitted during this process, shows the growing talent, diversity and strength of Indigenous storytellers.”

“The Sundance Institute’s Indigenous Program team and I congratulate these extraordinary storytellers whose scripts have been selected for the Inaugural Indigenous List — they offer not only some of the most unique voices of Indigenous film and television writing, but also offer a glimpse of what our American popular culture landscape will be shaped like when Indigenous voices are recognized and included,” said Indigenous Program director N. Bird Runningwater (Cheyenne, Mescalero Apache) in a statement.

In a statement, Black List founder Franklin Leonard said: “It’s a real honor to be partnered with [Runningwater], the Indigenous Program team at the Sundance Institute, Crystal Echo Hawk, and everyone at IllumiNative. I look forward to these and many more stories from Indigenous writers gracing screens of all sizes.”

Check out the scripts selected for the 2020 Indigenous List below:

After a nuclear war forces most of humanity into underground bunkers, a total loser must become the inspirational leader of a bunker known to execute any leader that drops below a 60% approval rating. (Animated)

Following the disappearance of her sister, a Native American hustler kidnaps her niece from her white grandparents and sets out for the state powwow in the hopes of keeping what’s left of their family intact.

After earning the chance of a lifetime to dance her dream ballet in France, a talented teenage Cherokee ballerina and her cowboy father search for her estranged mother, who left them years ago to chase her own dreams abroad.

“LORDS OF THE EARTH” by Blackhorse Lowe

LORDS OF THE EARTH is about two star-crossed lovers searching for each other amidst the backdrop of a harsh and violent New Mexico territory in 1863. In the film, Hastiin Hashke’ is a Navajo man who longs to be reunited with his wife, Taa’deezbaa, who was abducted into slavery.

After several years in prison, Kainoa wants nothing more than to reestablish a relationship with his son and Hawaiian heritage, but old friends and new circumstances threaten to derail his path.

When a small-town, high-end Hawai’i dog groomer learns that a hit was put on her on the Dark Web, she has to race to find the culprit among her friends and family before it's too late.

“THE BLIND” by Sterlin Harjo

When the teenage son of a Native American hunter is murdered by a group of backwoods drug dealers, the mourning father decides to exact revenge on those responsible for his death and the corruption in their small town.

“THE WILDEST WEST” by Blake Pickens

Riley works as a theme park attendant at Seven Flags Over Texas, a miserable establishment full of tyrannical customers that make obscene demands. But when a spot opens up to play Geronimo in the park's annual Wild West Show, he sees an opportunity to stop hawking hot dogs and become closer to his real goal of becoming an actor.

“TINDER ON THE REZ” by Brooke Swaney & Angela Tucker

Just because you are 35 and living back on the Rez with your parents, your brother and his two kids, doesn’t mean you can’t get laid, right? Don’t ask Lenny. It’s a sensitive topic.