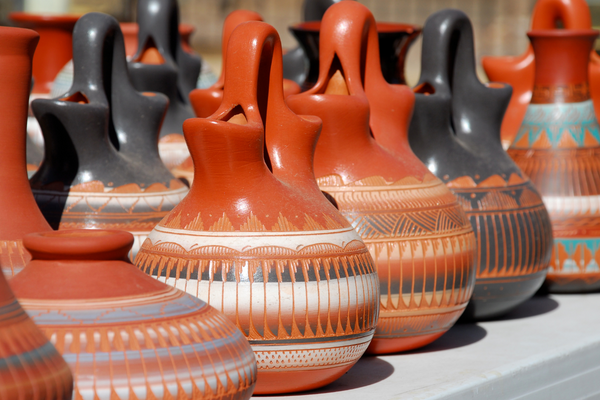 The Santa Fe Indian Market, the world’s largest and most prestigious North American Indian art market, wrapped up its centennial event this past weekend to large crowds. It was the first full market since 2019 and included a juried art show, gala, performances, Indigenous fashion shows, a crowd clothing contest, presentations, and an art market that generates millions of dollars for Native American fine art.

Organized by the Southwestern Association of American Indian Art (SWAIA), the Santa Fe Indian Market features up to 1,000 American Indian artists and draws approximately 100,000 people, generating up to $160 million for artists throughout the two-day event.

“Thank you SWAIA for making this market such a success for the artists, performers and to the many collectors and art lovers who came out to see us,” Native American Art Magazine posted on Instagram. “We appreciate you supporting and recognizing the importance of supporting Native arts and culture.”

The first market took place at the Sante Fe plaza 100 years ago and was coined “Indian Market.” American Indian artists from the Southwest gathered and sold woven rugs, jewelry, pottery, beaded items, Kachinas, moccasins, and other traditional American Indian crafts. The market attracted many people — especially wealthy white people — and it grew into a thriving market that has generated billions of dollars while featuring artists from the United States, Canada, and beyond.

The growth of Indian art markets led to an increase in forged arts and crafts that appear to be Indian-made, but are not. Misrepresentation of American Indian art has been illegal since 1935 when the Indian Arts and Crafts Board was formed, but it was rarely enforced. Punishment included up to $500 in fines and a maximum of 6-month jail time.

Since 1922, The Santa Fe Indian Market has awarded Best of Show winners to some of Indian Country’s most renowned arts, such as beadwork, pottery painting and basketry. This year’s honor included a $30,000 cash prize and was awarded to Russell Sanchez, San Ildefonso Pueblo. Sanchez’s winning piece — “100 years in the making!” — is a polychrome jar crafted with clay harvested from San Ildefonso inlaid with nearly 400 turquoise and hematite beads.

Sanchez has been showcasing his art at the Santa Fe Indian Market for 50 years. This is his first Best of Class award.

While fashion isn’t yet a class category, this year’s market included two days of programming dedicated to Indigenous designers, with multiple fashion shows and a trunk show.

“SWAIA is our Indigenous Fashion Week,” Rebekah Jarvey, a fashion designer from the Chippewa Cree Tribe of Rocky Boy Montana, told Native News Online. This year’s market was Jarvey’s first. She was awarded an Honorable Mention ribbon for her Night & Day Mask design.

“This past weekend, there were 11 fashion shows,” she said of SWAIA’s fashion events. “That fulfills my fashion heart.”