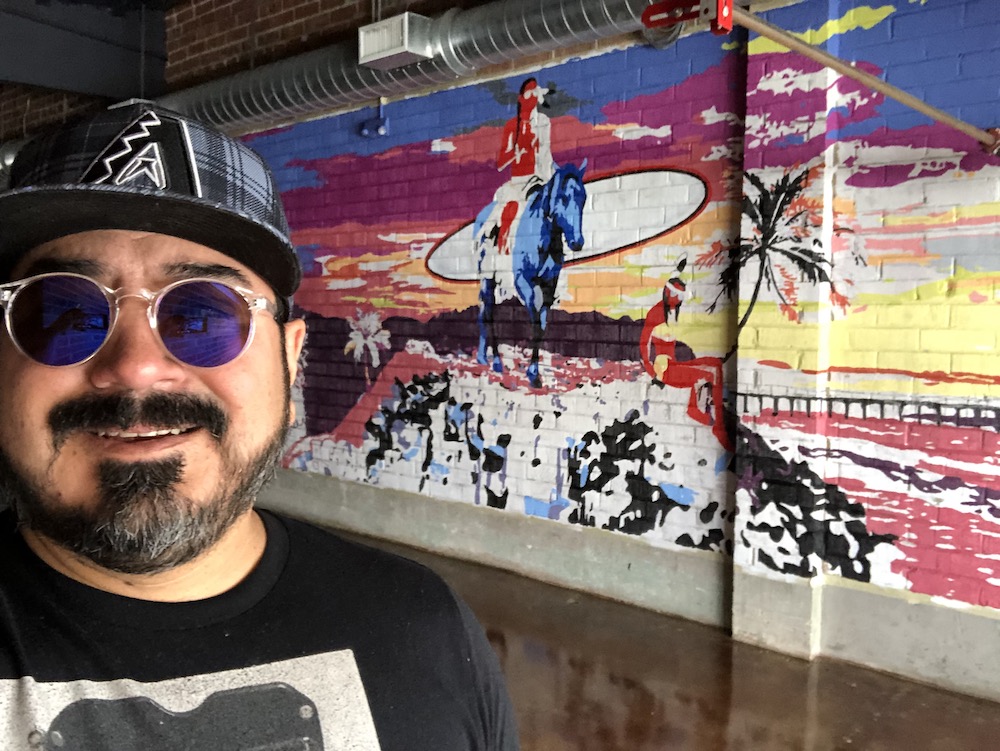 OCEAN BEACH, CA--  In just a few months, beverage connoisseurs will be able to sit back, sip a beer and soak up a sherbet sunset over Luiseño land.

The mural, which took about a week to complete, reflects the beauty of Luiseño territory. It also represents the Rincon Reservation Road, a trail the Rincon Band of Luiseño Indians historically traveled from the source of the San Luis Rey River in the Warner Hot Springs region of Palomar Mountain, to where the river meets the sea, at what is now known as Oceanside.

“I wanted to showcase their traditional lands, and then put a modern twist on that,” Hopkins said. “Over on the left side of the mural there is a trail that comes from the mountains down to the beach area like that road the Luiseño traveled.”

When it comes to color, Hopkins doesn’t cut corners. He said It took 44 shades to bring  his vivid and original vision to fruition.

“I’m what you would consider a pop artist, so I really love bright colors and the use of multiple colors,” Hopkins said.  “So working on it was a lot of fun.”

Hopkins’ innovative and imaginative use of color climaxes in  the funky focal point of the mural: a surfboard-wielding, sunglass-sporting Indian atop a dreamy blue horse.

“The blue colors within the horse are my favorite colors,” Hopkins said. “I really wanted that part of the mural to kind of just pop out and be the main focus. if I had done it in brown or a natural horse color, I don't think it would have the same impact.”

Hopkins, an award-winning artist who is known for large-scale pop art pieces boldly balancing the traditional and contemporary,  was selected for the project by the Rincon Economic Development Corporation’s (REDCO) Board.

While Hopkins himself is not Luiseño, he was still the ideal person out of the artists considered for the project, to bring the mural to life, said Shalome Briggs, vice chair of the REDCO Board.

“We knew that we wanted a Native American to paint it. And so we really started looking at Native American artists. We wanted somebody that could get our vision, and (create) something that says Native Americans are still here,” Briggs said.  “Joe was our pick because he just really got it. He understood it. And obviously we had looked at other works of his where he demonstrated the idea of Native Americans in a modern world. He listened to us and he got our vision.”

Briggs added that while the mural highlights the glory of Luiseño territory, it is also meant to be a more universal representation of Native American culture that makes members of all tribes, as well as non-Indigenous patrons feel welcome and comfortable in Indian Country.

There are a ton of independent breweries in Southern California and a mass of murals, but never have the two Golden State staples been blended in a way that fuses tribal economic development with Indigenous fine art.

The Rincon Reservation Road  Brewery is the first Southern California brewery owned by a tribe that offers a selection of beers brewed on their reservation. It’s also REDCO’s first off-reservation startup business.

“It's wonderful seeing that we are taking charge of our own economies as sovereign nations, and making ourselves self-sufficient and not having to depend on government  and all that,” Hopkins said.  “It's very satisfying and I'm very proud to be a part of that.”

Now that the painting is complete, Briggs is reassured that the board chose the right man for the mural.

“I was just standing there looking at it the other day, and we didn't even have any lights on. It just was the natural morning light coming in and the mural was just  stunning,” she said. “The colors are so vibrant. It's gorgeous. “