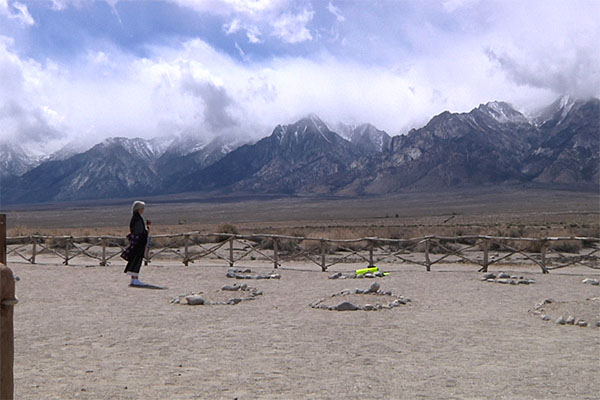 LOS ANGELES, Calif. — A new documentary in the works, “Manzanar Diverted,” confronts the layered histories of mistreated peoples upon the Nüümü (Paiute) and Newe (Shoshone) lands of Payahüünadü (place where the water always flows).

Formerly the Manzanar War Relocation Center, the Manzanar National Historic Site is located on the eastern side of the Sierra Nevada range on traditional Paiute and Shoshone lands, between Sequoia and Death Valley National Parks. It’s a picturesque region that many would recognize as the backdrop for films and TV shows from “Gunga Din” to “Star Trek.”

Yet the true history of Payahüünadü—present-day Owens Valley—has what filmmaker Ann Kaneko, who is Japanese American, calls a “legacy of colonization, racism, and social injustice”—from the forced removal of Indigenous peoples to the internment of Japanese Americans during World War II.

“First of all, they took all the Indians and tried to get us out of the valley; marched us down by Fort Tejon and we made our way back most of us,” said Tribal Historic Preservation Officer Kathy Jefferson Bancroft (Lone Pine Paiute-Shoshone), a key contributor to the film.

According to prerelease footage provided by Kaneko, during the Owens Valley Indian Wars between 1862 and 1863 when the government attempted to force-relocate the Paiute and Shoshone peoples, farmers and ranchers claimed much of the area as homesteads. After returning to their homelands, many Paiute and Shoshone worked on the farms and ranches of non-Native settlers.

Before WWII, in a twist of irony, some settlers were forced off the land by deals made by Los Angeles in order to acquire the region for the LA Department of Water and Power (LADWP).

Rose Masters, an Interpretive Park Ranger at the Manzanar Historic Site, explained how the LADWP bought up the area from farmers and ranchers. Soon after, because it was a large site owned by a single entity, the federal government forced LA to allow the first of ten World War II Japanese incarceration camps throughout the United States to occupy the land. Between March 21, 1942 and ‎November 21, 1945, Manzanar held over 11,000 Japanese Americans and resident Japanese aliens who were guilty of nothing but their ancestry.

In an interview with Native News Online, Tribal Historic Preservation Officer Monty Bengochia (Bishop Paiute Tribe), who also serves as chairman of the Owens Valley Indian Water Commission, lamented over the theft of their water by the government. “When we talk about history, we talk about (the Department of) the Interior scheme to take our land and water rights to LA,” Bengochia said.

Woven throughout the film are similar accounts regarding the government’s treatment of Japanese Americans and Native Americans and how this dynamic created an opportunity for an ongoing relationship between the cultures. “The administration of the internment camp was run by former Bureau of Indian Affairs staff,” said Kaneko, conjecturing the reason for the similarities in treatment.

Beverly Newel (Lone Pine Paiute Shoshone), was a child when Manzanar was an active camp. In the film, she relates her memories of the Japanese Americans arriving at the internment camp to her own people’s experience of removal, and said, “It’s like watching another vanquishment.”

“A lot of the Indian people helped the Japanese,” said Danelle Guierrez of the Lone Pine Paiute-Shoshone tribe. “The Japanese Americans would sneak out at night and go fishing and the Native Americans would guide them to where the best fishing spots are.”

The “Manzanar Diverted” cast and crew are as diverse as the inhabitants of the valley. Comprised of Japanese American former internees and their descendants, members of the Paiute and Shoshone tribes, descendants of settlers, and many other tribes and cultures, the project aims to examine this story through multiple perspectives.

In addition to taking care of her hundred-year-old mother who was a former internee at an Arkansas internment camp, Kaneko explained that both she and executive producer Tracy Rector (Choctaw/Seminole) are both mothers and have children home all the time and, because of the pandemic, it’s been difficult to find time to work.

“We are editing right now, and we work remotely, and we’re hoping to finish this fall and release it in the spring, but we’re in a good place because we’re done shooting,” Kaneko said.