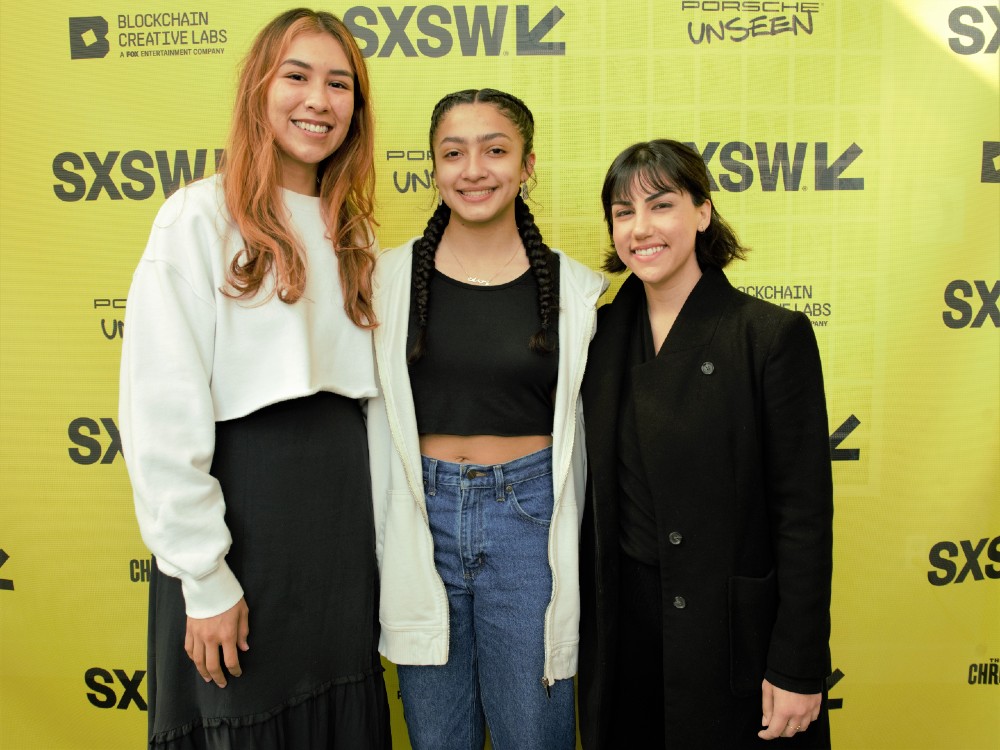 Documentary short, co-directed by a Diné filmmaker, follows a Karuk girl in Northern California as she prepares for her Flower Dance ceremony

Ahtyirahm Allen, 14, sits in a small conference room at the Driskill Hotel in downtown Austin. Ironically, the walls of the room are painted with romanticized images of the “frontier” with white cowboys herding cattle over an open range; the carpet is navy blue and covered in white stars, reminiscent of the American flag. And there is Allen, a young Karuk woman, with her hair is two braids, wearing a name plate that reads “Ahty,” the nickname she goes by, sitting in between the two directors, Shaandiin Tome, Diné, and Rayka Zehtabchi, who made a documentary about her Ihuk ceremony.

“I love the film,” Ahty says enthusiastically. “It's really cool. It always surprises me when I see myself in it because I'm like, ‘Is that me? Did I actually say that?’”

The documentary short, Long Line of Ladies, follows Ahty after she goes through her first period and prepares for her Ihuk or Flower Dance ceremony in her community located in rural Northern California. The first scene in the documentary is of Ahty being blindfolded by her father as she prepares to learn the Flower Dance in preparation for her upcoming ceremony. The documentary overall is beautifully shot, tender and absorbing.

On Tuesday, the South by Southwest Film Festival announced that Long Line of Ladies won best documentary short, beating out 13 other films. Since SXSW is an official qualifying film festival for the Academy Awards’ documentary shorts category, Long Line of Ladies is now eligible to submit for next year’s 95th Academy Awards. The film made its world premier at the Sundance Film Festival in January.

In the first scene, the audience learns, through text on a blank, black screen, that for over 120 years the Ihuk was not performed because of colonization, driven by the Gold Rush, which led to increased sexual violance against Indigenous women and girls. This fact is harrowing to learn juxtaposed to glimpses of Ahty with her parents, in moments that are loving and foster a sense of intimacy as the scene is shot in their home.

Ahty is one of a growing number of Karuk girls to go through their Ihuk and whose family is working to reclaim the practice. A couple times throughout the film, Ahty makes reference to how this ceremony will help give her strength as she overcomes life’s obstacles because if she can wear her taav, made of short black feathers that will cover her eyes, for four days while fasting, only able to drink acorn water, she can overcome anything.

The film is powerful, with moments that bring tears of joy. Unconditional love is the underlying theme of the film, that no matter what happens Ahty’s family and community will always be there for her. They love her and other girls in the community so much, that they relearned and reclaimed a ceremonial practice for them, to make sure they are adequately prepared for womanhood.

Inspired by her work with the women’s empowerment organization The Pad Project, which seeks to end stigma against menstruation globally, Zehtabchi wanted to do another documentary on the topic, but this time, from the perspective of a community that doesn’t stigmatize periods, instead celebrating them. She knew that there are many communities who celebrate a girl's transition into womanhood after her first menstruation through ceremony.

“We've exposed the stigma, but how do we flip the narrative so that it's about celebration,” Zehtabchi says–and not the celebration of people jumping on the bandwagon for social media– “But rather, communities where it's ingrained in the tradition and the culture. Communities that have actually been celebrating, not just at this time of the girl's life, but actually celebrating women for all of their lives.”

She started researching and found a blog by Ahty’s mother all about her older daughter’s Ihuk ceremony. This is how she connected with Ahty’s family and the Karuk community. But Zehtabchi knew she wasn’t equipped to tell this story by herself.

So, she began researching again, this time for Indigenous filmmakers and directors. She was drawn to the work of Diné filmmaker Shaandiin Tome. On a whim, she wrote a long, heartfelt email to Tome about the project and they scheduled a Zoom meeting. The pair instantly connected and from there started working on the film.

“It all started with the family first. They are out to change things and they find ways to uplift other people with them,” Tome said. “It created momentum for me in wanting to do this project. It really made me instantly drawn to them.”

Tome has been fortunate to learn from, listen to and connect with Indigenous people from across the country and globally. For her it was another moment to connect with the similarities and differences of another Indigenous nation.

Through the documentary the audience learns that the Ihuk ceremony returned for the generation of girls who were born or came of age in the 1990s. Their mothers, aunties, and grandmothers often were not able to have one. This is the same for Tome, who didn’t have her Kinaaldá, a Diné puberty ceremony for girls, but has a younger relative who they’re currently in the process of planning one for.

“It's super cool that this came full circle in a really awesome way. It's so touching that through this process I got to learn more about myself,” Tome said.

In the film, Ahty’s parents and other relatives say that her and other Karuk girls come from a long line of ladies stretching back millenia. This is where the name of the film comes from: This connection to the past and present makes it as if the once severed ties to this ceremony never happened, because they come from a long line of ladies. And to Ahty and her younger cousins it never did because they don’t know a life where the Ihuk cremoney wasn’t practiced. They all looked forward to the day they would do their Ihuk.

The film ends with a touching scene of Ahty, who is already in her taav, unable to see anything around her, being adorned with other regalia by her female relatives. Then, another relative takes her arm and leads her into the dense forest of northern California as the rest of her family sings. The audience never sees the ceremony, an intentional decision by the directors, but learns through text on the screen that once the ceremony is completed, Ahty’s taav will be removed and she will emerge a woman.