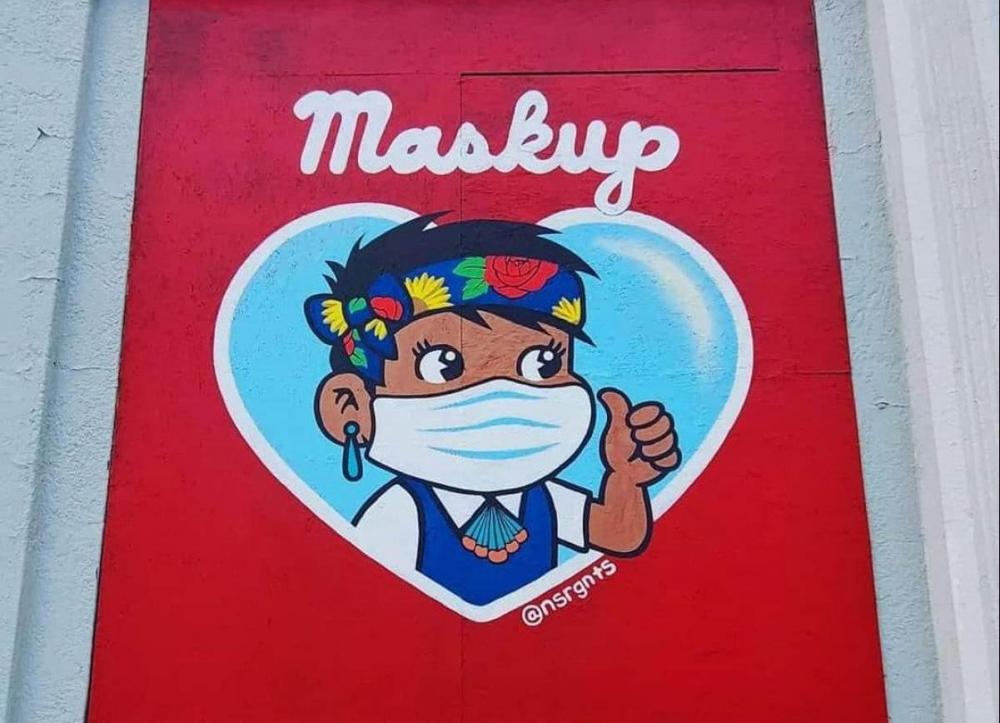 Albuquerque, N.M. – A pair of new pop art murals at the corner of 7th and Central in downtown Albuquerque tell a tale of two masked faces.

One mural depicts a rugged Tiwa man from the turn of the century, while the other stars a little Native boy with wide, twinkling eyes, who sprang from a painter’s imagination.

“It’s funny because they're almost the same image, but one’s a cartoon character and one’s a realistic version,” said Votan Henriquez (Maya, Nahua), who created the Tiwa man mural. “In today’s society we don’t really see ourselves on buildings or billboards so we want to make sure we continue to reflect the community to itself.” 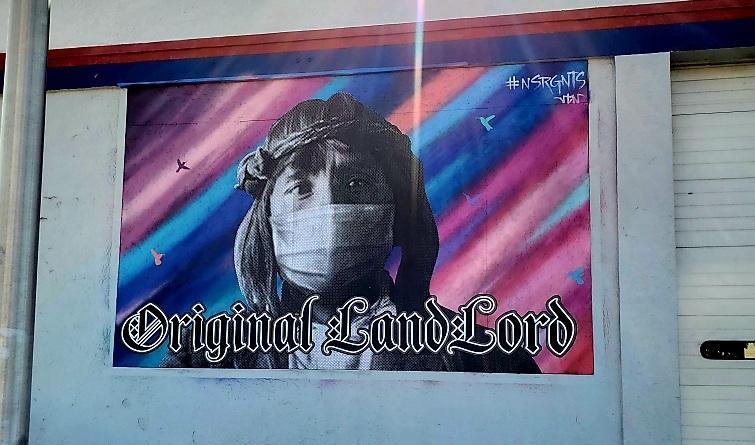 A mural depicting a masked Tiwa man in downtown Albuquerque. Artist and activist Votan Henriquez (Maya, Nahua) created the mural to represent the area's Indigenous people and encourage the community to wear masks.

The two are co-owners and leaders of NSRGNTS, an Indigenous brand, business and art collective Henriquez launched in 2000. Their merchandise includes streetwear, skateboard accessories, stickers and mugs decorated with “Decolonize,” as well as logos and other pro-Native mantras. They also offer items with original Native character cartoons influenced by Lewis’s longtime love of kawaii, the culture of cuteness in Japan, defined by cartoon characters with perfectly round, exaggerated eyes.

“We fund the collective through the brand. We create merchandise and when people purchase it we can fund projects,” said Henriquez, whose family is from El Salvador. “We also get hired to do commission work and murals throughout the country.” 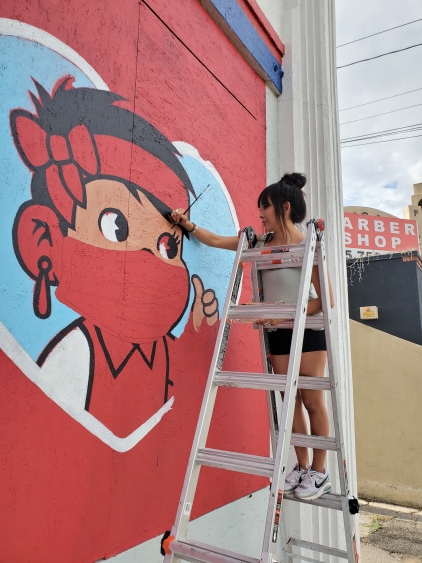 Leah Lewis (Pueblo, Hopi, Zuni, Dine) works on her Maskup mural in downtown Albuquerque. Their downtown Albuquerque murals were made for the Paint for Peace 505 Project. It is not an NSRGNTS project, but it's indicative of the type of art activism the collective organizes itself and contributes to on a regular basis.

After being hit hard during recent protests and riots over George Floyd, local Conquistador statues and other social justice issues, downtown Albuquerque was bleak, beaten up and boarded up, according to Henriquez.

To revitalize the desolate scene, the founder of local gallery and art collective OT Circus started the project to paint over the town’s boarded-up walls and windows with murals by local artists.

They put out a call to local artists to claim a boarded-up wall, and Henriquez and Lewis selected two large spaces at opposite ends of a building that used to house a Firestone Auto Parts.

On one end, Lewis’s Maskup mural, with a cherubic Native boy framed by a heart, is an eclectic burst of cuteness, caution and love. It playfully expresses Lewis’s strong maternal instinct, cultural background and various artistic influences.

“I did this piece because I'm a mother of two little Native boys and I have been encouraging them to stay safe, wear their masks and wash their hands,” Lewis said. Balam, 3, and Mateo, 8, are the couple’s sons. “It’s geared toward showing our little ones that they themselves are being represented.”

Lewis is part Zuni, and she incorporated that piece of her identity into the design.

“I drew the little boy like a little Zuni man,” she said. “That’s how they wear their bandannas – they tie them on the side.”

Lewis also tossed in her own twist on a stylized logo, a nod to Japanese pop art.

“As a lover of all things kawaii growing up, it has influenced my style and I like to mix it up with the use of logos that have been altered to fit the messages,” Lewis said.

She said the cursive font she used in the mural is a spin on the logo for a Japanese chocolate company, Milky.

Henriquez’s nearby mural coaxes the community to wear masks with a drastically different image, with the phrase “Original LandLord” scrawled across it.

The basis of the mural is a photo from either the late 1800s or early 1900s of a Tiwa man from the Sandia Pueblo area.

“What is now Albuquerque is considered Tiwa territory,” Henriquez said. “We photoshopped a surgical mask on him and did a half-tone effect on the image so it looks really rugged… We wanted to pay homage to the original landlords of this area, who are still here.”

To make the mural, Henriquez used a method called wheatpasting. First he created the image on his computer, then printed it out on a very large scale and pasted the massive printout on the wall. 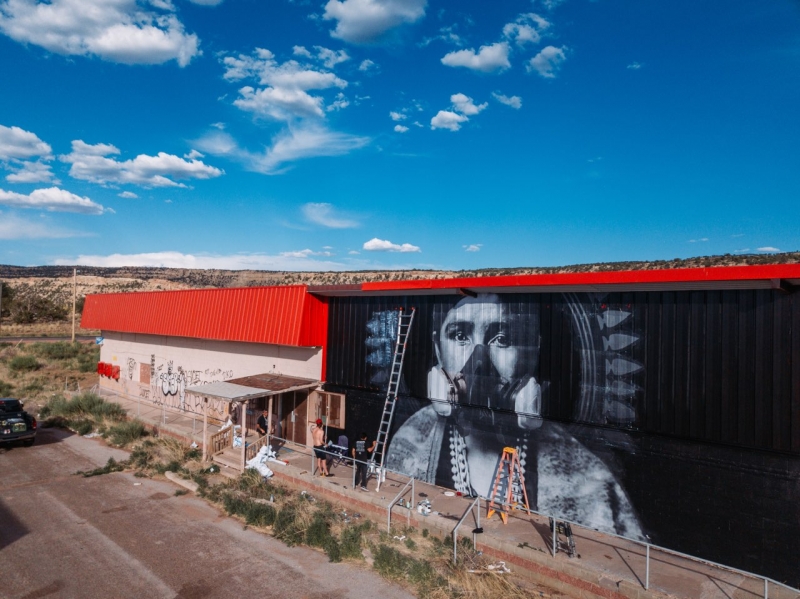 Votan Henriquez (Maya, Nahua) created this mural on the Navajo Nation. He photoshopped a gas mask onto a vintage photo of a Navajo woman to drive home the importance of wearing masks.

Part of Henriquez’s inspiration came from an NSRGNTS mural he recently created in the Navajo Nation. That mural features a vintage photo of a Navajo woman with a photoshopped gas mask. The Tiwa man mural is basically Henriquez’s Albuquerque version of the Navajo mural, he said.

NSRGNTS has been heavily involved in assisting tribes devastated by COVID-19. The collective has been fundraising and sending support since early in the pandemic, in addition to making empowering murals.

“We've been doing mutual aid work by sending goods and PPE out to different tribes, so we've seen how COVID-19 has impacted different reservations and tribes,” Lewis said. “Because we have seen the numbers climb and seen people we know being affected by the virus, it has caused us to switch into a mode of encouraging any and all types of prevention, whether it be through providing PPE and food, or sending the messages out through art.”