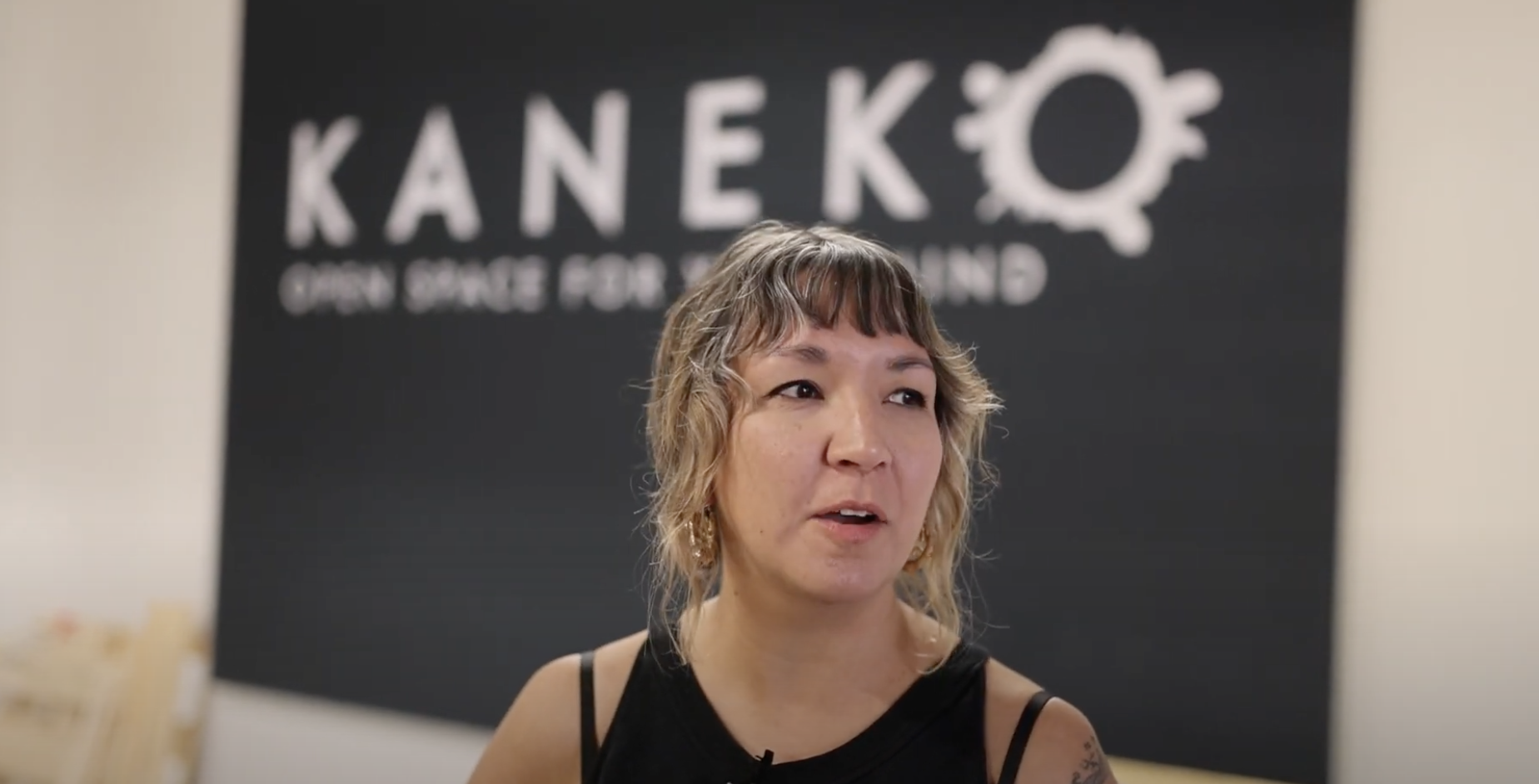 An elegy to the late Native American poet Diane Burns, Sky Hopinka’s I’ll Remember You as You Were, Not as What You’ll Become is a meditation on mortality, reincarnation, and the forms the transcendent spirit takes while descending upon landscapes of life and death. The film continues Hopinka’s exploration of how his indigenous homeland, language, and identity interconnect. In his carefully composed and thickly layered film, Hopinka weaves together original and found images and sounds to form a visual and aural montage that is sublime and otherworldly yet grounded in reality. Archival footage of Burns—a poet known for challenging Native American stereotypes—is punctuated with powwow dancers filmed by Hopinka and ethnographic texts on Ho-Chunk concepts of rebirth and the afterlife written by American anthropologist Paul Radin. The rhythmic sound of Sacred Harp singing and ambient electronic music from the film’s soundtrack.

Take a tour of the Fort Wayne Museum of Art’s exhibition Breathing Life into History: Contemporary Native American Art from the Collection.

The featured artists’ abilities to either weave their heritage into contemporary contexts through medium and imagery, or continue using traditional methods in a modern world, speaks to their self-expression. Influences seen throughout the works include textiles, nature, rituals and storytelling, and identity and politics. Indigenous artists have, and continue to, create with their cultural knowledge, reinterpret tradition, and engage with current topics.

This tour is free with museum admission, but an RSVP is required. Please use this form to reserve your tickets. Payment will be taken at the door for non-members. Limit of 16 in-person visitors. Unlimited digital attendance through our Facebook Live or YouTube Live tours at the same time.

Imagining the Indian: The Fight Against Native American Mascoting is a documentary that examines the movement that is ending the use of Native American names, logos, and mascots in the world of sports and beyond. The film details the current uprising against the misappropriation of Native culture in a national reckoning about racial injustice that has succeeded in the removal of Confederate imagery, toppling statues of Christopher Columbus and forcing corporate sponsors of Washington’s NFL team to demand it change its most-offensive name.

The film will be screened at the Field Museum’s James Simpson Theatre, followed by a panel discussion with the filmmakers.

In celebration of the Association on American Indian Affairs’ 100th anniversary, the Association is hosting the first annual Tribal Museums Day with free admission to participating Tribal Museums across the nation. Participating museums include the Bay Mills Indian Community’s Gnoozhekaaning History Museum in Brimley, Michigan; the Winnebago Tribe of Nebraska’s Angel De Cora Museum in Winnebago, Nebraska; and the Eastern Band of Cherokee Indian’s Museum of the Cherokee Indian. For a complete list of participating museums and to find one near you, see the official listing at indian-affairs.org.

Dawnland is the behind-the-scenes story of the first official Truth and Reconciliation Commission in the United States to uncover the shocking removal of Native American children from their homes to “save them from being Indian” by child welfare authorities. Dawnland aired on Independent Lens on PBS in November 2018 and 202, reaching more than two million viewers and winning a national Emmy® Award for Outstanding Research in 2018. Mishy Lesser, Ed.D, Learning Director for Upstander Project and Emmy® award-winning researcher, will lead a Q&A and discussion after the viewing.

Join the Kaneko Galleries in Omaha, NB, for a discussion with Lakota artist Sarah Lowe about her solo exhibition, Post. Rowe is a multimedia artist based in Omaha, NE. Her work opens cross-cultural dialogues by utilizing methods of painting, casting, fiber arts, performance, and Native American ceremony in unconventional ways. Rowe’s work is participatory, a call to action, and re-imagines traditional Native American symbology to fit the narrative of today’s global landscape. Using skewed imagery in historic texts and images from Lakota winter counts, Rowe projects her vision of contemporary Indigenous experience into the mix with an offbeat enchantment. Rowe’s imagined landscapes are bold and vibrant, containing a shape-shifting bestiary of tales both familiar and strange. Rowe holds a B.A. in Studio Art from Webster University, studying in St. Louis, MO, and Vienna, Austria. She is of Lakota and Ponca descent.

Ryan LittleEagle is a Native American singer-songwriter and musician from San Antonio, Texas, now living in Dawsonville, Georgia. Influenced by the likes of George Strait, Randy Travis, Johnny Cash, and R Carlos Nakai, Littleeagle blends the rich storytelling of Country/Americana music and with the cultural roots of First Nations music, creating a style called NDN Country. LittleEagle is a Native American cultural educator and traditional dancer, having spoken at private events, museums, schools, and colleges throughout the United States. His great respect for his culture and people is evident and represented in a positive way through his music. Ryan tries to utilize his talents to bring awareness to events and issues affecting the indigenous communities in the Americas and other parts of the world. He is truly an ambassador for bridging the gap between the old ways and the new.