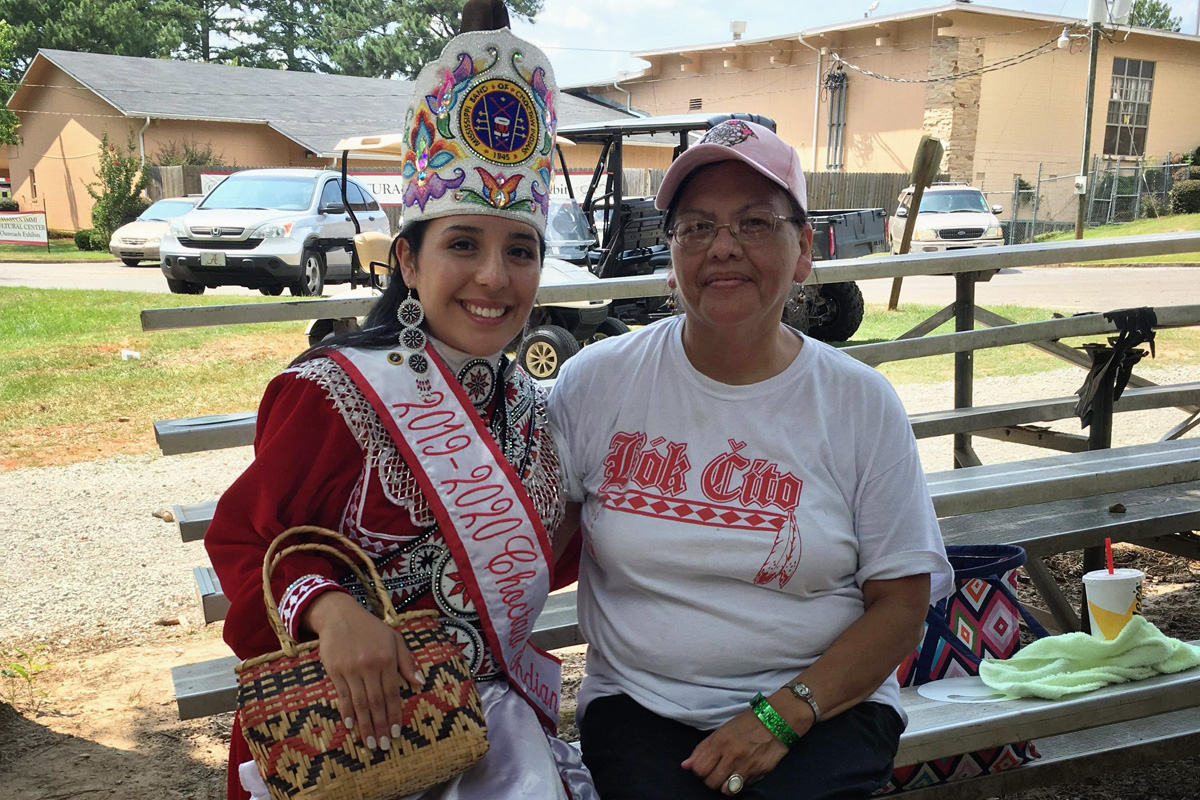 Summer was one of my favorite times of the year as a child, not just for summer vacation from school, but for me it meant that the fair was coming to the Choctaw Reservation. Our fair, in Neshoba County, means different things to each of us, but collectively, it is a time to get together as a tribe and showcase our rich culture and openly invite the public to visit us and learn about us in our homeland that my ancestors refused to leave during the removal period of the 1820s and 1830s.

Today’s Choctaw Indian Fair looks much different than its very simple, humble beginnings. Tribal members exhibited their garden produce at the time, just as our ancestors did during harvest season when the gathering in the old days was known as the New Corn Ceremony or the Green Corn Festival. A princess pageant wasn’t part of the Fair until 1955, and the country-music concerts started a decade later.

[NOTE: This article was originally published by the Mississippi Free Press.]

Since my parents worked day jobs in the Pearl River Community, I got to enjoy the fair mainly in the evenings, when the country-music concerts were in full swing. In fact, our fair has been immortalized in a song recorded by a country-music professional who later became our tribal historian, Bob Ferguson. He was a beloved figure on the reservation for writing “Choctaw Saturday Night”—heard every year during the fair.

Also, Marty Stuart (from nearby Philadelphia) wrote a country song describing his meeting his future wife Connie Smith in the song “Met My Baby at the Choctaw Fair.” Stuart has brought along tribal dancers to perform on his nationally syndicated television show as well as headlined himself at the Choctaw Indian Fair.

Despite not being a personal fan of country music, hearing those sounds by big acts at the fair always bring certain fond memories that, while growing up Choctaw, I am still a southern American and a Mississippian as well, and many people do love country music in these parts. It is one of the biggest draws to the Choctaw Indian Fair and helps make it so successful. Our fair was named one of the 10 Best Summer Events in Mississippi, along with our neighboring Neshoba County Fair that happens nearby a few weeks later.

Part of that success is the country music, which we Choctaw kids grew up associating with the modern version of our culture’s New Corn Ceremony.

Country music reminds me of my paternal grandmother in an odd way: I wouldn’t say she was a fan of the genre, either, but it was always background music when I spent time at her house in the Bogue Chitto community while she babysat me and my cousins as our parents worked at the only jobs available in the Pearl River Community in the early 1990s. Her aging TV would usually be off, but the radio would always be tuned to Meridian’s country-music station, 97 OKK.

As I mentioned in a previous column in the Mississippi Free Press, my grandmother didn’t speak very much English so I doubt she could relate to lyrics sung by Billy Ray Cyrus, much less understand the words he was singing.

These days, my cousins and I reminisce about our beloved grandma and country music while we shelled peas or snapped green beans by hand, despite her being a strict disciplinarian who definitely made sure we were all well behaved.  She was an elder known throughout the community and highly respected, and we miss her very much.

One year we had a blanket spread out on the hill above the amphitheater and ate our supper while we enjoyed the concert. Usually, we’d then look around at the arts and crafts vendors, community culture booths, and 4-H prize-winning fruits and vegetables. Then, around 10 p.m., the concerts would be over, and the crowds usually headed up the hill to Warrior Stadium at Choctaw Central High School across the street as the sound of drum beats brought in the next two teams up for play in the World Series of Stickball tournament.

I loved that I got to stay up way past my bedtime during the fair. The game would go on for about an hour or so, and the midway didn’t close until 1 or 2 a.m.  As a child, I’d bargain for one more ride as we walked about a half-mile from the stadium, just past the midway and to the waiting shuttle buses to take us back to our cars. These days, the far end of the Golden Moon Casino is used for fair parking; in the 1990s, it was the old Choctaw Industrial Park.

I really appreciate the community pride generated during fair season. Some people associate with more than one community, but I associate totally with the Bogue Chitto “Big Creek” community because both my parents are from there. I have cousins I would visit in Pearl River and Conehatta (in Newton County) on occasion, but when it came to stickball games during the fair, I was a Bok Cito team fan from the start.

I especially loved spotting Grandma Amos on the hill by the stadium in her lawn chair and white team shirt while supporting our “Million Man” team (nicknamed due to the large number of players on the roster), watching her cheering them on and exclaiming anytime a score was made. Even though she would be sitting far from the playing field, she would know that someone scored not just from the sounds of the stadium crowd, but by listening to the drumbeat.

The Choctaw drum beats while the game is in play, and takes on a different rhythm when a player scores a point—by striking an upright pole with a leather-woven ball. This is a centuries-old tradition that we still practice today. The old games would have hundreds of players, and the field would be miles long, so that anyone listening to the drums would know if there was a winning goal. These days, you can watch our games miles away at a distance from the fair’s YouTube channel.

After Pandemic Losses, A Welcome Reunion

My community has plenty to love and to instill pride in our culture. The development club was often successful at winning first prize in the community booth displays, often rivaling the largest community of Pearl River. Bogue Chitto also won the stickball championship, as they did in 2019, before COVID hit this region and shut everything down and caused the cancellation of last year’s fair.

This last week has been real exciting on the reservation, as crowds continued to come and enjoy the casinos, water park and resort amenities, such as the Fourth of July fireworks and now, starting July 8, the 2021 edition of the World Series of Stickball is now underway, while things are cautiously returning back to normal.

Even the midway rides arrived early ahead of the “official” fair dates of July 14-17 and can take advantage of the families who gather for the early rounds of the games. Small reminders do remain that COVID was here just a year ago as some fair concession stands now in operation have signs that remind patrons to separate 6 feet apart. This year, the fair added a health fair booth with a vaccination station available on the fairgrounds.

As an adult, I enjoy the fair differently now. I enjoy it mainly for the family reunion, as I have out-of-state relatives in metro Chicago, St. Louis, Memphis, and friends of the family in Alabama and South Dakota. We all come together and experience the fair. It will be that much more fulfilling this year as we haven’t seen most of our family and friends due to the virus and last year’s cancellation. I cannot wait.

Furthermore, there is reason for optimism: the latest statistics from our tribal health officials indicate no current positive cases of COVID as of last week. That promises that this year will be one of the most memorable fairs yet, even as everyone needs to take precautions due to the Delta variant spreading in Mississippi.

A year ago, many drummers set out to beat the drum at a specific time in solidarity from the safety of their homes and front yards, during what was declared as “Virtual” Fair Week 2020 on social media. This year, we get to march with them in person, honor the many lives we have lost due to the virus and continue our traditions as we have been doing since before Mississippi became a state—and before our tribal government was re-established here in 1945.

If you ever get to visit our fair, there’s no telling who you might meet: I personally got to get a selfie with Native actress Elaine Miles, known mostly for her role in “Northern Exposure,” but most natives recognize her from other native themed films such as “Smoke Signals.” To my surprise, she is a fan of Bok Cito!

As they say in Mississippi, “all y’all are welcome!”