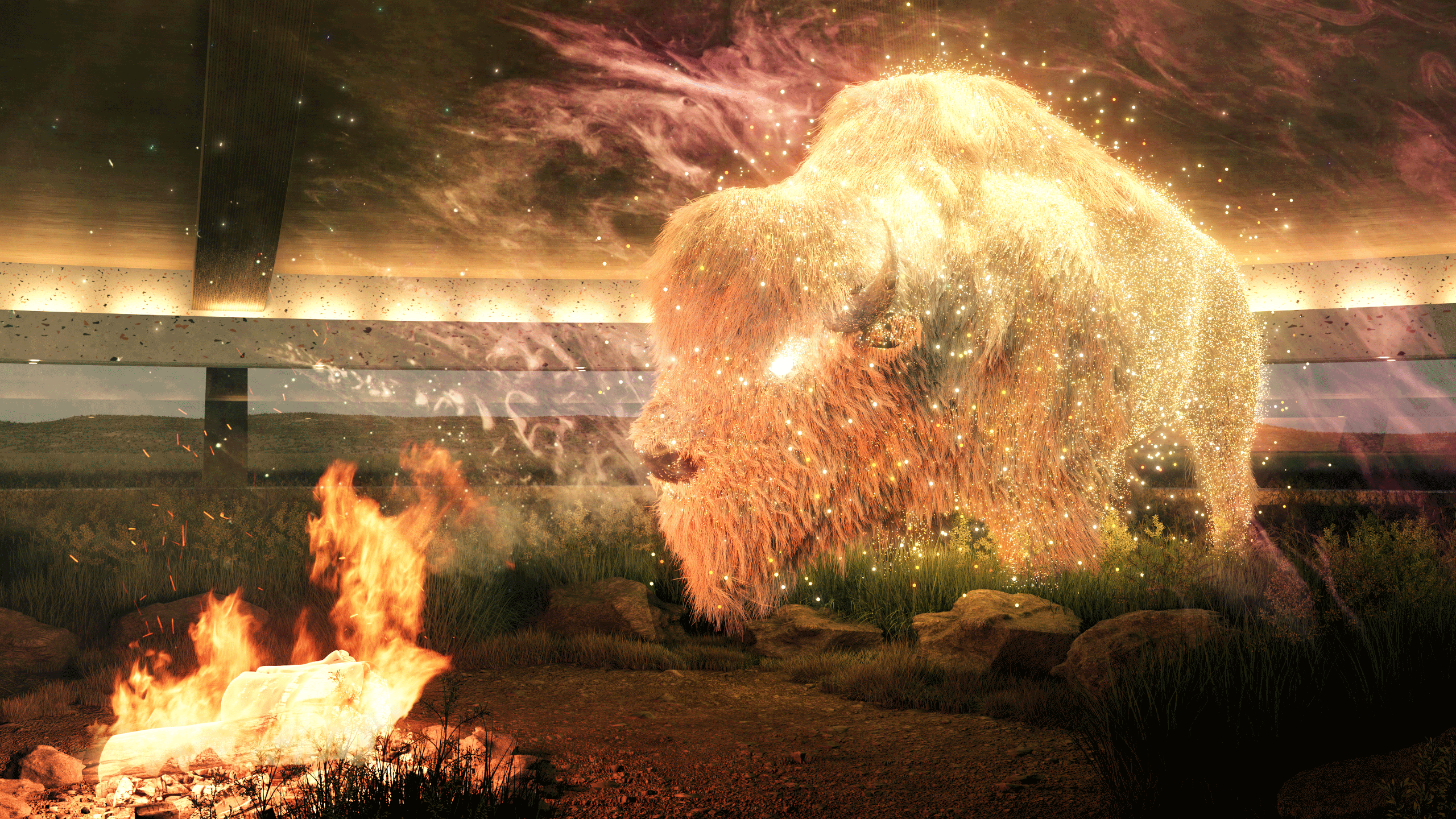 Simply existing as an Indigenous man in Canada can be hazardous to one’s health, and, in some cases, fatal.

In 2008, Indigenous patient Brian Sinclair, 45, perished in plain sight in a Winnipeg medical facility while waiting in his wheelchair to have an infection treated.

“When I heard Brian Sinclair's story. It's just this feeling of being amazed, like, how the hell does this happen? This man goes to the hospital. And he waits thirty four hours, and dies in the hospital,” said Blackfoot filmmaker Ahnahktsipiitaa, also known as Colin Van Loon.

Through cutting edge virtual reality technology, Van Loon, film editor Jessica Dymond and Cree art director James Monkman channel the shock and anger surrounding the systemic racism that facilitated Sinclair’s suffering, and allow audiences to simulate waiting with him, in the revolutionary virtual reality experience This is Not a Ceremony.

“If we hear Brian's story, that is one experience, but if we are actually sitting with him, that creates a new level of knowledge and understanding,” Van Loon said.

Produced by Dana Dansereau at the National Film Board of Canada’s Digital Studio in Vancouver, B.C., the immersive call to bear witness to injustice head-on without the option of turning a blind eye, premiered last week at the Sundance Film Festival, as part of the New Frontier program, which champions experimental, forward-looking works at the intersection of film, art and technology.

“It's always been a lifelong dream as a filmmaker to go to Sundance, and  New Frontier is a very cool platform,” Van Loon said.  “As I started to get into VR, I always looked at the works of New Frontier, because they have such a sharp curatorial team.”

Viewers must have access to an Oculus VR headset to properly experience This is Not a Ceremony, and that means only a limited tech-forward audience will have the opportunity to become fully immersed. But Van Loon isn’t letting that discourage him.

“While I still want everybody to see it, there's no other way I could have told these stories. I wouldn't have made it in a different way. Because he was so important to the piece that people could feel close to the storytellers,” said Van Loon, founder of Blackfoot Nation Films.

The grim realities of Sinclair, and sexual abuse survivor Adam North Peigan, are at the center of the 20-minute vision that also takes full advantage of VR’s ability to create surreal, otherworldly layers of symbols, sounds, and images that add emotional and spiritual dimension.

Rounding out Ceremony’s universe are mighty buffalo spirits storming through the scene with fire in their eyes and sparks flying off of them,  a pair of trickster poets observing and reacting with acidic, artful wit to the all-too-familiar situations, and swirling, star-dusted clouds containing storytelling survivors, family members, and a subdued, yet strong matriarch played by the late Mowachaht/Muchalaht First Nation activist Lillian Rose Howard, who offers healing words and urges viewers to remember what they have witnessed.

What they witness is impossible to erase from the sense memory.

In Sinclair’s segment, viewers are placed face to face with the doomed, immobile man, with his head helplessly hanging to the side. During the excruciating wait, layers of hazy activity and audio, including doctors and nurses shuffling about, and the terminal sound of a ticking clock, approximate how Sinclair may have been processing the situation.

“In Blackfoot culture, we believe that before somebody passes, their spirit will kind of go and come back a few times, and we were working from this idea a little bit,” Van Loon said.  “There may have been moments in that time period where he was waiting when Brian was crossing over and coming back. In the background, we see the Sandhills, which is the Blackfoot representation of where we go after we pass.”

While Sinclair’s story is heightened by surreal effects, the fragments of the story of Adam North Peigan, who as a young orphan was removed from a sexually abusive home only to be re-homed just minutes away with members of the original offending family, are expressed in an unflinching, raw and real style.

In a haunting re-enactment, viewers witness a terrified, defiant young Peigan desperately refusing to leave the car and face his new placement, until his frustrated and empathy-free social worker forces him to submit to his fresh hell.

“When Adam was telling me his story, again, I had that feeling of just being dumbfounded. It's hard to face. But it's important to engage,” Van Loon said.  “We still have to live our lives in these places. Brian Sinclair’s family still has to go to the same hospital where their relation passed away. They don't have a choice.”

Van Loon admits that a sort of jadedness can be felt by Indigenous people who still hear about and experience systemic racism on a regular basis. He believes it’s crucial to resist that fatigue by bringing the reality to light to both recognize the fortitude of those who face the struggle, and to reveal the harsh realities to the wider world.

“Truth must happen before reconciliation can happen, and in Canada, we’re still very much in the moment of truth,” he said. “I thought it was important to put people inside of these stories. Hopefully, it’s a wake up call.”

This is Not a Ceremony can be viewed online through Sunday, Jan. 30. Visit newfrontier.sundance.org for more information. Future exhibits of the work will be announced on https://www.nfb.ca/interactive/ceremony/.

This story has been updated to add National Film Board of Canada's role.