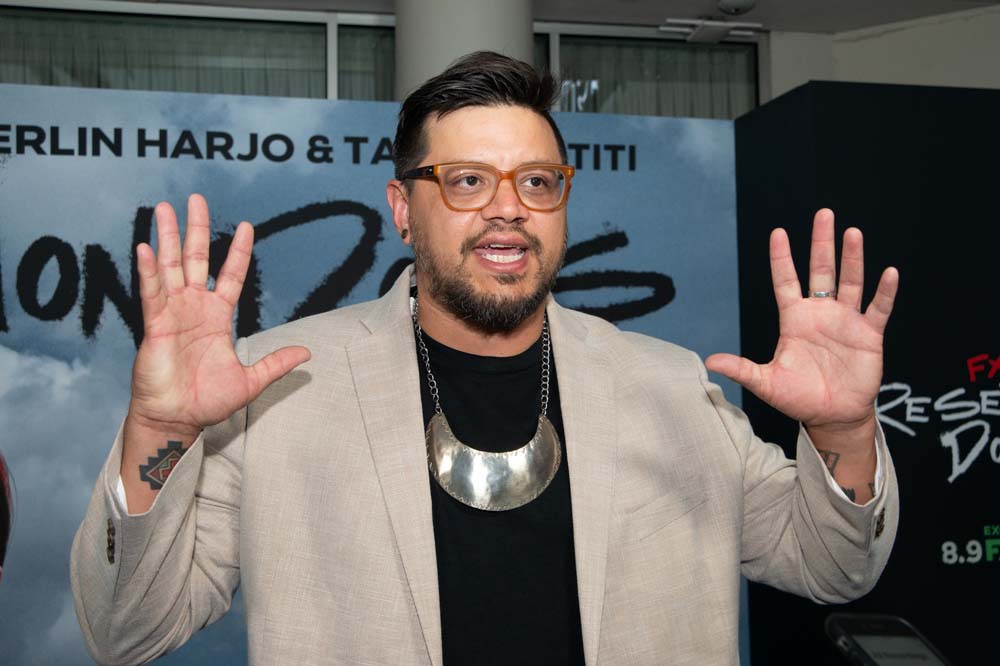 Over the past few years, Indigenous people have become more visible in mainstream arts, entertainment and culture in the U.S. and Canada. In celebration of Indigenous Peoples’ Day, here are 10 Native Americans blazing trails in arts and culture that you should get to know.

Executive producer Sterlin Harjo (Seminole, Muscogee) is the creative force behind the groundbreaking Indigenous series Reservation Dogs. Since its 2021 debut, the show has garnered numerous awards, including a Film Independent Spirit Award, a Peabody Award, an AFI Award, and more. He’s used the show as a platform for other Native writers, actors, rappers and performers. Harjo is also a founding member of the 1491s, a Native American comedy troupe that performs worldwide.

Bethany Yellowtail is a member of the Northern Cheyenne Nation and one of the top Indigenous designers in fashion. Since launching her brand, B. Yellowtail, in 2015, she has risen to the global fashion stage, with her work featured in Vogue and honored alongside industry powerhouses like Tom Ford. She currently partners with the Native Wellness Institute on the Rez Girls Mentorship fund, which provides workshops, retreats and mentorships opportunities for women, girls and two-spirit relatives of Missing and Murdered Indigenous Peoples.

Sault Ste. Marie Tribe of Chippewa Indians tribal member Angeline Boulley is the author behind New York Times best-seller Firekeepers Daughter, a trailblazing thriller about a Native teenager who must root out corruption in her community. The novel has been hailed as “genre-bending” (Entertainment Weekly), “immersive and enthralling” (Financial Times), and an “absolute powerhouse of a debut” (NPR). Boulley’s highly-anticipated novel Warrior Girl Unearthed hits the shelves in May 2023.

Author Tommy Orange (Cheyenne and Arapaho) exploded onto the literary scene in 2018 with his debut novel, There, There. A Pulitzer Prize finalist and winner of the American Book Award, There, There has been hailed for highlighting the challenges of urban Native life. Wandering Stars, the hotly anticipated sequel, could hit bookshelves in 2023.

Photographer Matika Wilbur, a member of Swinomish and Tulalip tribes, is the force behind Project 562, a grant and crowd-funded photography initiative with a mission to capture the stories of more than 562 tribes across the United States. Since 2012, Wilbur has photographed more than 300 tribal nations in 40 states, resulting in an unprecedented collection of images and oral histories capturing contemporary Native life.

20-year-old model Quannah Chasing Horse (Hän Gwich’in, Oglala Lakota) hit the fashion world by storm when she appeared in Calvin Klein’s One Future Youth campaign in 2020. Since then, her meteoric rise as a model and Indigenous advocate has spurred magazine cover shoots, fashion campaigns, standing ovations at Indian Country economic events and a documentary film about her meteoric rise.

Luiseño-Shoshone-Bannock fashion artist Jamie Okuma’s (La Jolla) is known for her elaborate beadwork and striking designs. Her work has been featured in Peacocks’ Rutherford Falls and has won various awards, including the Maxwell Hanrahan Foundation Award in Craft and three best-in-show titles from the prestigious Sante Fe Indian Market. In addition, Okuma’s designs are featured in the permanent collections Minneapolis Institute of Art, the Metropolitan Museum of Art, the Nelson-Atkins Museum, and the Smithsonian Institution’s National Museum of the American Indian.

Tim “2oolman” Hill (Six Nation of The Grand River) and Ehren “Bear Witness” Thomas (Cayuga First Nation) of June-award-winning Indigenous electronic music group A Tribe Called Red stepped out in 2021 under the new name Halluci Nation. Hill and Thomas played Electric DJ Powwow Night with their former bandmate in Ottawa’s club scene for a decade. They toured the world as a Tribe Called Red, playing festivals such as Coachella, Bonnaroo, and The New Orleans Jazz festival. Under their new moniker, the duo continues to merge traditional powwow sound with innovative electronic beats and is committed to elevating the contemporary Native experience through music.