Should guns be allowed at schools/on campus? 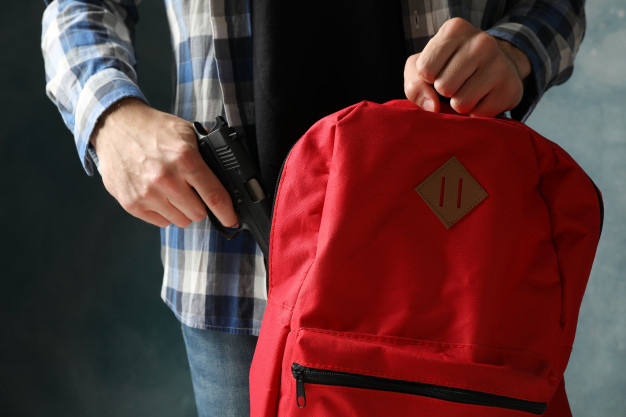 Campus shootings have resulted in the deaths of countless innocent people. These terroristic acts affect not only students and teachers but also social well-being in general. After a number of tragic incidents, the government started paying increased attention to safety issues. It is obvious now that this phenomenon cannot be tolerated and should be prevented by any means possible. Effective deterrent measures should be developed to ensure public safety.

Some people believe that allowing unconcealed guns on campus in a good way to address the problem, while others claim that such approach will only aggravate aggression. Will armed teachers and students turn educational institutions into a war zone or a safe environment?

There is a heated controversy around this issue which is preserved in US society for years.  It was actively discussed by campus officials and legislators, analyzed in the context of constitutional rights. All possible effects and consequences were considered. At the same time, there is still no compromise. Both advocates and opponents have legitimate arguments and concerns. Experts from pro-papers.com have analyzed the main advantages and disadvantages of guns at school to help you form a personal opinion.

Pros of guns on campus

Some lawmakers believe that guns are the best remedy for violence. Fewer people would like to commit a crime being aware that they may be shot. Teachers and learners should cease to be victims, receive the chance to defend themselves and control public order. The Founders had the same considerations when they were promoting the 2nd Amendment, understood that principles of freedom and safety are very important for the democratic state.

John Enns, a congressman from Oklahoma, is one of the first lawmakers who supported the idea of guns on campus. He proposed to create a law for this problem and initiate research to find out whether new legislation will bring positive results.

Today, weapons at schools are allowed in many US states, while others think about joining them after facing sad incidents. For example, Nevada the considered feasibility of changes after a girl was raped. A victim was sure that a gun could save her.

Responsible citizens should be able to protect themselves

When stumbling upon shocking news, students experience fear and have a natural desire to protect themselves, make sure that their school will not turn into a cemetery. Let’s face it: criminals will always carry guns, no matter what the law says. Therefore, legislation prohibiting weapons will bring no use to regular citizens respecting the government and behaving cautiously. On the contrary, it will expose them to greater danger, turn teachers and students into an easy prey for predators.

Polls show that people having concealed weapons feel more safe, especially if walking down the street at night or visiting dangerous districts. Responsible persons arm themselves for self-defense and not to provoke conflicts. It is just a safety issue.

The number of female gun carriers grows rapidly because ladies want to avoid rapist attacks. It is difficult for young ladies to relax and have fun at parties if they are not sure that no violent offenders wait for them. Also, weapons are often used to prevent robbery. Criminals usually retreat after hearing a gunshot. Statistics show that other methods are less effective, so there is every reason to make educational environment safer too.

Cons of guns on campus

This argument contradicts the first advantage. Even though some researchers substantiate the positive impact of concealed guns, other experts point to the opposite conclusions, provide persuasive evidence, so their opinion should also be taken into account by legislators.

First of all, opponents claim that school is not a fertile soil for violence. Many teachers and learners claim that they feel safe in classrooms and dorms, even those who work and study in dysfunctional districts. Shootings are more likely to take place in bars, night clubs, on the street. At the same time, a campus is usually associated with security and discipline.

Some people believe that guns on campus may provoke anxiety, unjustified fear, and thoughtless actions, even if there is no actual danger. It is at least reasonable to make weapons a teachers’ privilege. Teenagers may be rather impressionable and emotional. Hearing harsh words from peers, a student may lose temper and shot them. This way, victims turn into criminals. It is definitely not fair to respond to ridicule with a bullet.

It is also worth not forgetting that kids may steal educators’ guns. Teachers are live people who cannot always stay focused. Weakening control for just one short moment may result in a tragic incident. In addition, school staff’s work is stressful. There are many examples demonstrating that furious teachers may shout at disobedient kids and even beat them. Who can guarantee that educators will not use their weapons?

Sometimes, it is better to give a bully your purse instead of taking a weapon in a hand and starting shooting. Armed students and teachers are more likely to be injured. Most criminals do not strive to kill. As a rule, they need money, want to humiliate or rape a victim. But a gun may scare them and provoke more violent actions. Therefore, weapons do not provide immunity for violence and should be used only when person’s life is endangered in order not to aggravate conflicts.