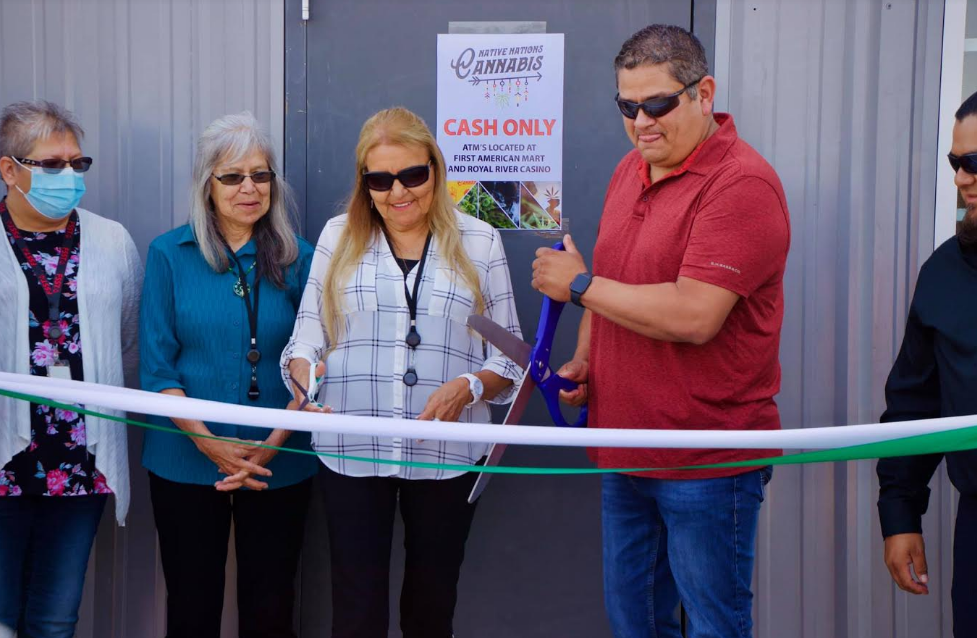 Located 40 miles north from Sioux Falls, S.D. on the Flandreau Indian Reservation, the dispensary is being operated through FSST Pharms, LLC, a company owned by the Flandreau Santee Sioux Tribe.

“The grand opening of the Flandreau Santee Sioux Tribe’s Native Nations Dispensary went very well, and customers have flooded the dispensary all day,” Flandreau Santee Sioux Attorney General Seth Pearman told Native News Online. “The Tribe is confident that the regulatory structure it put in place will create a safe product that will benefit customers.”

The Flandreau Santee Sioux Tribe (FSST) made national news after becoming the first tribal nation to legalize marijuana, this after the Department of Justice issued a memorandum in December 2014, stating that tribal nations may grow and sell marijuana as long as the states they are in have also legalized the use of marijuana. The tribe used a former bowling alley and transformed it into a lounge where the marijuana would be dispensed and consumed, also consisting of four rooms devoted to medical marijuana treatment. The lounge was estimated to generate $2 million monthly.

The opening is seen by some as a test to the tribe’s sovereignty. South Dakota state officials have warned that it could take another year before cannabis could be legally sold in the state, which has some skeptics weary that consumers will be targeted by law enforcement.

The tribe requires each customer to first obtain a medical marijuana ID card through its medical marijuana program, which is independent of the program the South Dakota Department of Health is trying to finalize. Governor Kristi Noem’s office released a statement on Wednesday saying that state troopers would not acknowledge tribal-issued marijuana cards required to purchase at the dispensary unless they’re for Flandreau Santee Sioux Tribal members.

“The nonresident card provision applies in this instance, so long as the cardholder is an enrolled tribal member and presents an unexpired medical cannabis card issued by the resident’s tribe," reads a press release issued by Gov. Noem’s Office Wednesday evening. FSST Attorney General Pearman told the Argus Leader Wednesday that the Highway Patrol would be in violation of what's outlined in South Dakota Codified Law Chapter 34-20G if they arrest non-tribal members with a valid medical marijuana ID card issued by the tribe.

The framework unveiled by the governor states that “Highway Patrol personnel will not, at the scene of a stop or interaction, arrest a South Dakota resident who is unable to present an unexpired medical cannabis card" as long as three conditions are met: the individual possesses no more than three ounces of natural and unaltered marijuana, the individual claims at the time of the interaction that the medical cannabis is to treat or alleviate a debilitating medical condition as defined by the Department of Health, and the individual produces printed or electronic documentation relative to the debilitating medical condition from a licensed medical doctor.

Law enforcement authorities throughout the state have said they will no longer pursue charges against any adult found in possession of three ounces of marijuana or less, regardless of medical card status, starting July 1, 2021. “Even if you don’t have a medical marijuana card, the decision was made that on low level, low quantity offenses, it’s a waste of resources to try and enforce the very, very complicated version of medical marijuana that was passed by the voter," Minnehaha County Sheriff Mike Milstead said to the Argus Leader on June 30.

The opening of Native Nations Dispensary included a ribbon cutting ceremony accompanied with a prayer by a Tribal elder and smudging of the building and attendees before sales began.

“The economic opportunity is also substantial, and could assist the tribe to fill budget gaps, and expand its programming,” FSST Attorney General Pearman said.