DULUTH, Minn. — For 56 years, the Boundary Waters Canoe Area Wilderness along Minnesota’s border with Canada has been federally protected through the National Wilderness Preservation System. More than 100,000 paddlers enjoy the area’s clear lakes and conifer forests each year, camping out beneath centuries-old pine trees on islands scattered throughout the intricate web of land and water.

A growing body of research, however, calls into question the Boundary Waters as “a place where the earth and its community of life are untrammeled by man,” in the words of the 1964 Wilderness Act. The act was signed into law by President Lyndon B. Johnson, and set aside some of the nation’s most pristine places to be protected from significant human alteration.

A 2019 study published in the journal Human Ecology provides physical evidence of resource management in the Boundary Waters, dating back as far as 1743. 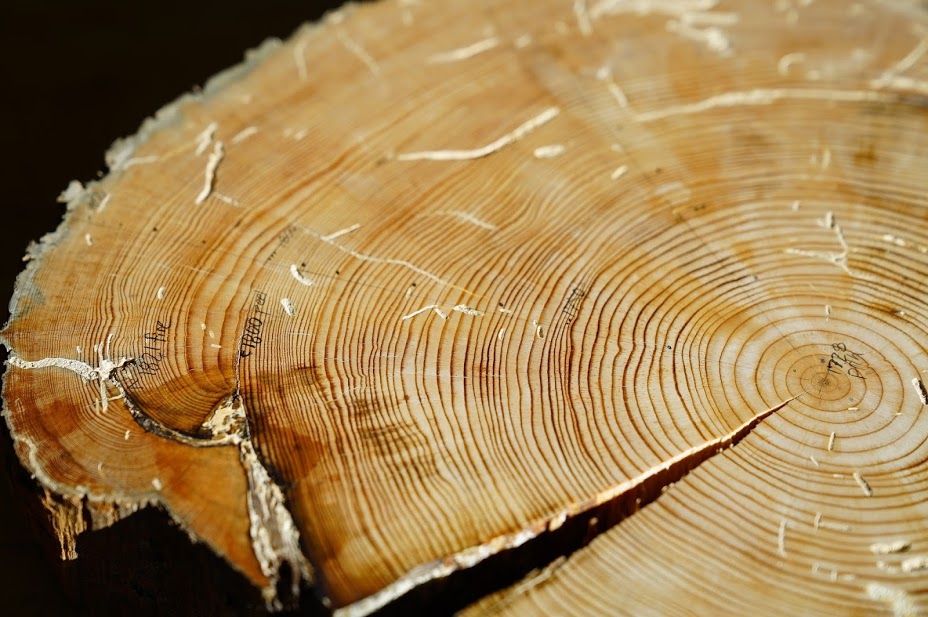 A team of university researchers found hundreds of oblong scars gouged into the bark of old growth red pines, marks from the tools of Ojibwe boat-builders extracting pine resin. Mixed with charcoal and animal fat, the pine resin served as a strong adhesive used for waterproofing birch bark canoes.

Evan Larson, a geography professor at the University of Wisconsin-Platteville and lead author of the study, said the findings highlight the need for a dramatic shift in the perception of America’s public lands. And Indigenous scholars and land management experts say it reinforces the need for federal agencies to ensure that tribes play a role in the management of natural areas.

“I’ve been visiting the Boundary Waters since I was just a kid,” Larson said. “This project fundamentally reshaped my understanding of that landscape.”

Larson calls these scar-bearing pines “culturally modified trees,” and first recognized them when bushwhacking with a colleague near Red Sucker Bay. It was clear to them that the marks were not caused by fire, which leaves triangular wounds at a tree’s base, or lightning, which leaves spiral marks around the tree that move toward the ground.

They were able to date the scars by counting the rings of dead and fallen trees, each one representing a year of the tree’s life.

“We cut through the first one with a crosscut saw, and found over 100 rings just on the outside of this scar,” Larson said.

They went on to find more than 30 of these trees on the 6-acre island alone, and 244 over the course of their survey. Through dating the marks, Larson pieced together a picture of the bustling fur trade in the 18th and 19th centuries.

“We were standing in the exact same spot as someone who stood here 200 years ago, interacting with the same tree,” said Larson. “It was a really powerful moment.” 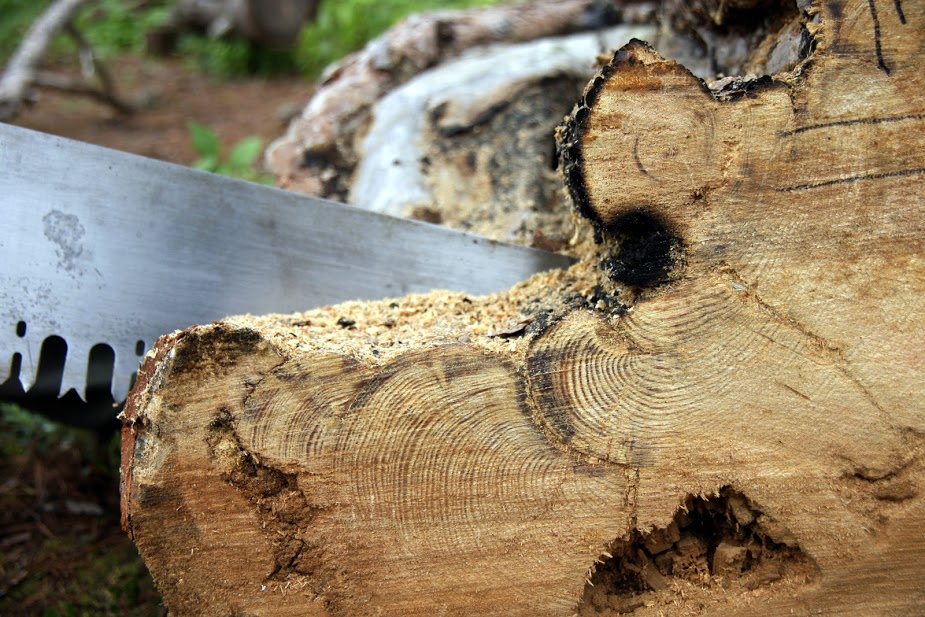 Researchers cutting through a dead and fallen red pine with a crosscut saw. Photo by Evan Larson.

Larson’s study sheds light on how Native people have long managed the forests in the Boundary Waters, and challenges the idea of wilderness as a place kept pure from human impact.

“It’s now becoming more widely accepted that wilderness is a construct; part of an American mythology,” said Rosalyn LaPier, an environmental historian and member of the Blackfeet Tribe of Montana. “There might be some Indigenous people along the way, but it’s still a story of pilgrims arriving in a wide open space, made for Manifest Destiny.”

There has been human habitation and management of the Boundary Waters for at least 11,000 years, according to Anton Treuer, a professor of Ojibwe at Bemidji State University.

The Boundary Waters’ original inhabitants maintained blueberry patches, cleared dense vegetation for village sites and even artificially extended the range of wild game, Treuer said. While bison originally dwelt in the Great Plains, prescribed fire drove them into the woodlands of Minnesota and even as far east as New Jersey.

“There’s a lack of understanding about how human beings have operated on the planet,” said Treuer. “Ojibwe people—and before them the Dakota, and before them other tribes—intentionally manipulated their environment in the Boundary Waters.”

Treuer said federal agencies should strive for shared decision making with local tribes, ensuring their agency in the management of the nation’s natural areas, which continue to serve as sacred cultural places for many Indigenous communities in the United States.

“Native people didn’t tread lightly on the land,” said Treuer. “They used it and marked it and shaped their environment. We always have.”

Southeast of the Boundary Waters and across Lake Superior, Damon Panek has worked for the Apostle Islands National Lakeshore for nearly 20 years. He has been the park’s cultural educator and fire management coordinator since 2013. For Panek, these two job titles are intertwined. 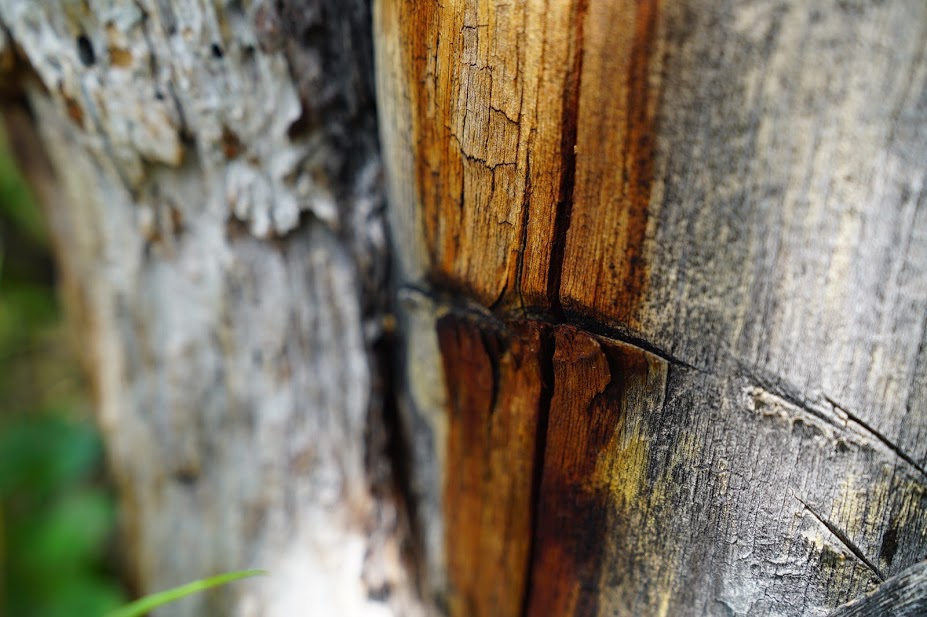 Scar left in red-pine by an Ojibwe boat-builder hundreds of years ago. Scars like these indicate a “culturally modified tree.” Photo by Evan Larson.

“I always loved working on burns, but my attitude toward fire has now evolved into a cultural connection,” said Panek, who has family roots nearby on Madeline Island and on the White Earth Reservation in Minnesota. “We’re preserving the ecosystem our ancestors knew and the species they depended on for life.”

Panek’s efforts have been focused on Stockton Island, where telling fire scars can be observed on tree stumps amid a grove of old red pines.

“The frequency of fire seems to be every six to eight years for most of the stand’s history,” Panek said. “That’s an ideal blueberry growth span. Human burn plans through history match a perfect timeframe for blueberry harvests.”

Without fire, this stand would make a gradual but radical transition, according to Panek. Less fire-adapted hardwood species would move in, while red pines and blueberries would eventually lose their place. This process is already being observed on the edge of the stand.

In some cases, the consequences of fire suppression are especially dangerous. More than a century of built up fuels in the American West have led to fires that burn with unprecedented speed and intensity, experts say. This summer was a record wildfire season, with 8.3 million acres burned compared to last year’s total of 4.5 million.

“Out west, we’re seeing the result of management plans that haven't been working,” Panek said. “There are a lot of factors at play, but if agencies would have been listening and working together with tribes we wouldn’t have the problems we’re having today. We’re in a catch-up phase now.”

But returning to pre-colonial fire practices means recovering knowledge that has often been actively discouraged and erased.

The last known burn applied to Stockton Island by the Ojibwe occurred in the 1940s. When Panek consulted elders from neighboring reservations about this, he found a historical knowledge gap to be a limiting factor. 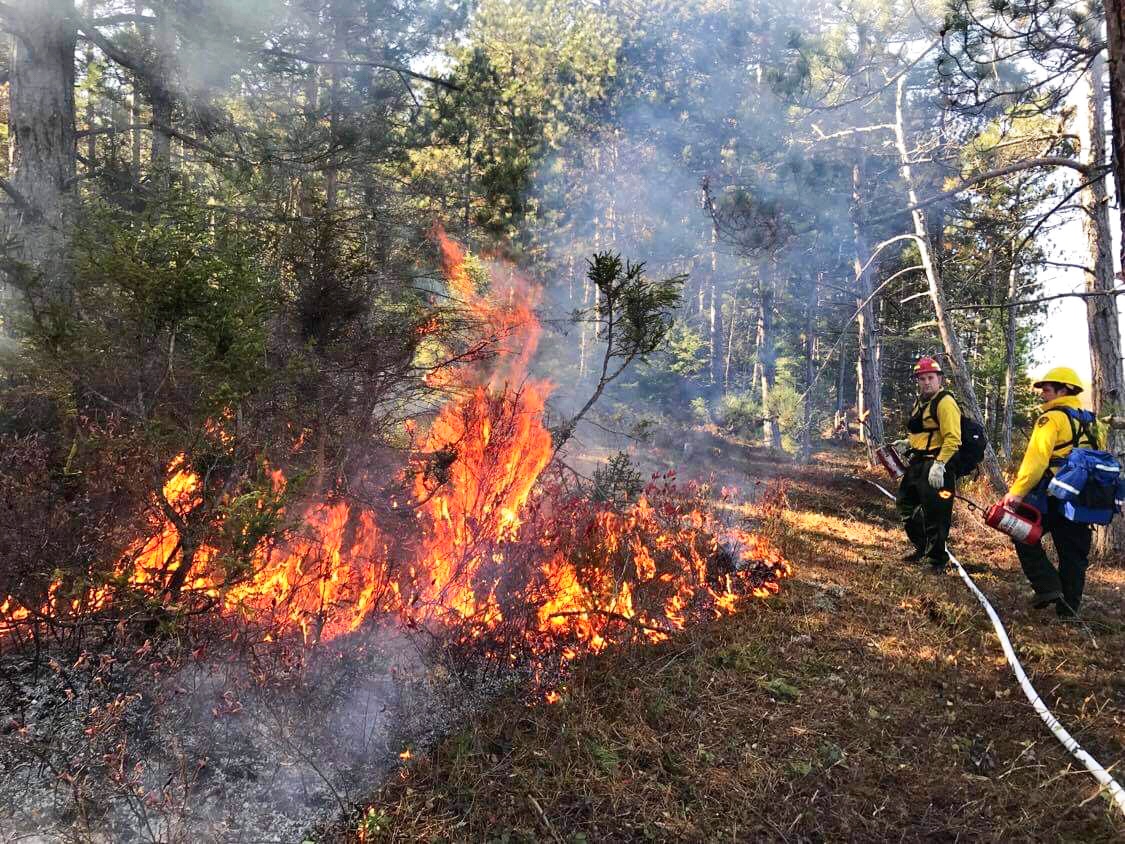 Prescribed fire on Stockton Island, overseen and orchestrated by Damon Panek based on historic fire intervals. Photo by Damon Panek.

“Starting in the early 1930s, burning was criminalized in Wisconsin,” Panek said. “Native people could be arrested for practicing our lifeways: hunting, fishing, or setting fires.”

Government mandated fire suppression became commonplace nationwide by the early 20th century. Damon feels that a fear of breaking the law a generation ago likely affected elders’ willingness to pass down their use of fire.

“The suppression of fire also suppressed the transmission of knowledge,” Panek said.

Studies like Larson’s, however, look to the trees to fill those knowledge gaps.

“It’s not a surprise that this information isn’t integrated throughout most forestry educations; our country did everything it could think of to eliminate it,” Larson said. “What we’re really doing is serving as translators for the stories that have been recorded in the bodies of these trees for hundreds of years.”