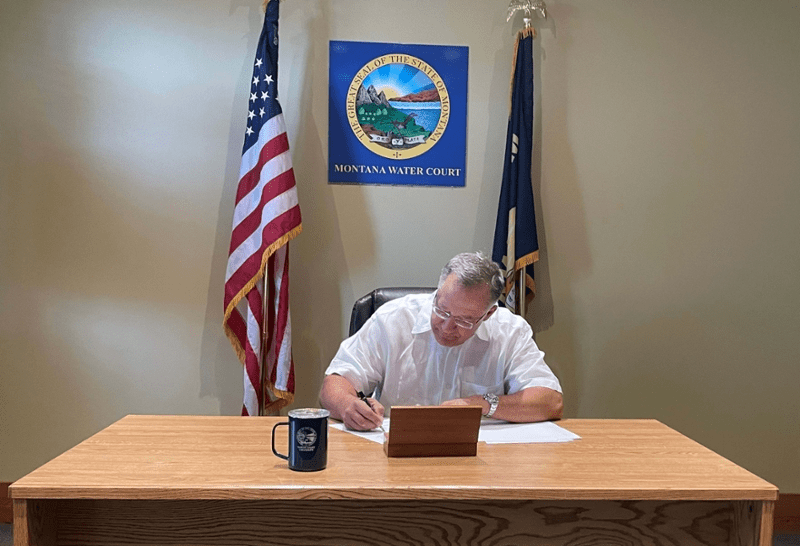 More than 800 water rights claimed by members of the Turtle Mountain Band of Chippewa Indians have been pulled out of legal limbo following the Montana Water Court’s issuance of a first-of-its-kind order this month.

The final decree is an 896-page order that covers 12 water basins across the state. The water rights in question are claimed by the United States on behalf of the tribe.

[NOTE: This article was originally published by Montana Free Press.]

The order by Chief Water Judge Russell McElyea represents the first time the Montana Water Court has reached resolution on tribal reserved water rights outside of a negotiated compact like the Confederated Salish and Kootenai Tribes water compact, which took more than a decade to reach ratification by the Montana Legislature, U.S. Congress and, late last year, the tribes. The CSKT water compact also has a fiscal component — the creation of a $1.9 billion trust fund dedicated in part to rehabilitation of the Flathead Indian Irrigation Project — whereas there’s no such allocation involved in the Montana Water Court’s final decree on the Chippewa claims.

The Montana Water Court has worked on the case since 2015, when the federal government first brought the tribal rights before the state Water Court for adjudication.

“I hope it’s the first step in a tidal wave of similar such decisions,” McElyea said in an interview. “Doing this is kind of like the first space flight to Mars. You can anticipate some of the problems that you’re going to encounter, but you can’t anticipate them all. We’ve tried to think hard about what issues might arise when the final decree is issued and deal with those in the decree itself for the sake of bringing finality to this process.”

McElyea said he hopes having the first such case decided will establish momentum for similar claims. According to a press release issued by the Montana Water Court, more than 80 decrees covering about 250,000 water rights are awaiting adjudication by the court.

In the release, Montana Supreme Court Chief Justice Mike McGrath called the decree a “critical milestone in the adjudication process” that will provide certainty to water users in Montana.

The decree establishes ownership of tribal reserved water rights, which are water rights that are reserved for certain applications like agriculture or grazing on Native American lands held in trust by the U.S. government. In this case, those lands are allotments that stem from the 1887 General Allotment Act, or Dawes Act, which allocated parcels of land to tribal members in an effort to make Native American land ownership more closely resemble the private property system favored by the government.

The Turtle Mountain Band of Chippewa Indians’ reservation is located in North Dakota, but since it’s so small — just 12 miles long by 6 miles wide — Congress authorized members of the tribe to take allotments on approximately 40,000 acres of land in Montana. Those allotments convey ownership to landowners with restrictions on the property’s transfer and use. The land is held in trust for tribal members by the federal government.

It’s generally been understood that the allotments also included water right ownership, but that ownership hadn’t been formally recognized in a legal sense until the Water Court’s July 12 order. McElyea said more than 7,000 allottees stand to be impacted by the order.

The final decree establishes clarity on the amount of water allocated to users in a particular basin. It also establishes what those water rights can be used for and their priority, which determines who’s first in line for available water when demand exceeds a basin’s supply.

“Though this is a first step and there may be appeals, the recognition of tribal water rights pursuant to the reserved water rights doctrine marks a moment in time when a basin can begin to understand the realities of water availability and usage,” said Adell Amos, a University of Oregon School of Law professor experienced in natural resource and water law, in an emailed statement. “The community can hopefully begin to imagine a future that is more sustainable and one that honors these Indigenous rights.”

McElyea said there were between 20 and 30 objections to the water rights the U.S. was claiming on behalf of tribal members. Those objections, raised by individuals, ranch owners and the city of Plentywood, were resolved through negotiation between the parties and the federal government, he said.

An email seeking comment from an attorney representing the city of Plentywood was not returned by press time.

Billings native Amanda Eggert covers environmental issues for MTFP. Amanda is a graduate of the University of Montana School of Journalism who has written for Outside magazine and Outlaw Partners. At Outlaw Partners she led coverage for the biweekly newspaper Explore Big Sky. Contact Amanda at [email protected].