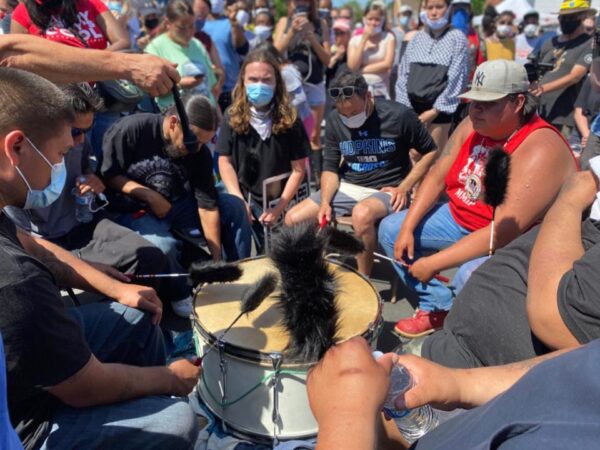 OPINION. It was a cold and windy November afternoon as I stood inside the home of Dennis Banks on the Friday after he died. The house sits on a northern point of Leech Lake in central Minnesota.  As whitecaps crashed against the shore, I could see three of his grandsons replenishing the sacred fire with new firewood to keep it burning in his honor.

Inside the home family members discussed plans for his ceremony the following day and then his burial. The blue walls of his home were filled with photographs and other memorabilia from his half-century involvement with the American Indian Movement (AIM) that would make a museum curator envious.

Banks co-founded AIM in Minneapolis in 1968 to combat the police brutality of American Indians that was taking place on the streets of the Twin Cities. I looked down at a small table next to a wooden rocking chair that was positioned to look out to the lake. On the table, there was a book about the Black Lives Matter movement.

To my regret, I failed to write down the title of the book, but I remember surmising that this great AIM leader, whose leadership extended from fighting police brutality to the Standing Rock protests, had been reading the book about another movement before he was rushed off to the hospital with a weakened heart.

The effort to fight police brutality in the American Indian community was the impetus of AIM. In November 2009, I had the honor of interviewing Banks at Grand Valley State University in front of a standing-room-only crowd. In his talk, he recounted AIM’s genesis. He said that AIM founders were fed up with the large number of urban American Indians being rounded up each weekend, beaten and then hauled off to jail in paddy wagons. Often, they were made to do manual labor as part of their punishment.

Flash forward to 2020. During the past two weeks—since George Floyd, a 46-year-old African American man, was murdered by excessive police force in Minneapolis—American Indians in the Twin Cities and throughout Indian Country have shown up to support Black Lives Matter protests.

Events often have a way of removing emotional scabs that we would like to think have long healed. Floyd’s death has caused this reaction for many. This past week, an American Indian friend posted on her Facebook page a remembrance of her brother who died in the late 1970s. He was arrested in a large city and jailed. While in jail, he died from what was deemed a suicide. She remembered that in the six months before his death, other ‘suicides’ happened in the jail.

“I thought I buried all this anger and pain but in the past week I’m drowning in it. I fear for our black and brown men, especially those that struggle with sobriety and mental health. I cry for the hate and inhumanity. Please let us do better… I don’t need sympathy please, that’s just fuel for my anger right now,” she wrote.

One such story involved the killing of Mah-hi-vist “Red Bird” Goodblanket (Cheyenne -Arapaho/Cherokee), 18, who was diagnosed with Oppositional Defiant Disorder several years prior. Four nights before Christmas, on the winter solstice, Red Bird experienced an episode associated with his medical condition. His parents, to their regret, called the police so that the teen would not harm himself. Within moments of entering their home in Clinton, Oklahoma, Red Bird was shot seven times and killed by the police.

The officers involved with the killing were investigated and the killing was deemed justified because police say Red Bird tried to attack them with a knife. His parents dispute that account.

On Friday, I talked to Red Bird’s mother, Melissa Goodblanket, to discuss her thoughts on the Black Lives Matter protest that are happening around the globe in the aftermath of Floyd’s death.

She said she watched part of Floyd’s funeral on Thursday. Goodblanket is pleased there is so much attention being given to deaths by law enforcement committed against blacks and American Indians.“Finally, for the first time, people are waking up and for that I am grateful that people are waking up and standing together,” she told me. “It is for the greater good for all living beings...that’s what is on my mind.”

During our conversation, she mentioned Dennis Banks. The year before he died, Banks passed through the town of Clinton as his last Longest Walk made its way to Washington, D.C. She said he took some paperwork disclosing the details of Red Bird’s killing. He took the documents to officials in Washington.

Her comments took me back inside Banks’ home where the Blacks Lives Matter book lay on the table. From the bookmark in the book, it appeared he never finished it. Given the ongoing deaths by police brutality against American Indians, I know our story is not finished either. That is why the Blacks Lives Matter protests resonate across Indian Country.