Time to Get Rid of Columbus Day Forever! 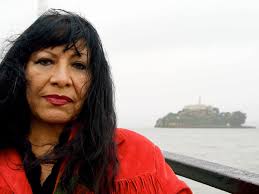 Guest Opinion. The United States federal government still honors the genocidal maniac that brought the wrath of evil to the Americas. It is time to get rid of Columbus Day forever!

It had been prophesied that the White Brother would come to our continents and he would have a symbol of the sacred circle of life representing everything good or he would bring the symbol of the broken circle, which will bring evil, death and destruction. Christopher Columbus’s ships all had the symbol of the broken circle and their priests carried the cross. As Indigenous people of the Americas, we have endured the past five hundred years of death and destruction all around us, and it has continued in many forms to the present day. Our plants and animals, birds, water, air and all life have suffered from this wrath.

It’s time to make a choice to support this wicked path or change to the path of light and life. The government must get rid of their evil champion Christopher Columbus, who symbolizes their wicked deeds.

Columbus Day needs to be abolished and Indigenous people of the Americas honored. This sign of good intent in the right direction can happen if we want this change! There are many other things that can change to restore goodness and harmony in order to become a reality for all people and not just an illusion.

Changing Columbus Day to Indigenous Peoples’ Day is far over due. As Native Indigenous people, we applaud the City of Seattle and the other cities who have set the new standard for change. This makes it visible and embarrassing for the US Government to maintain their colonial and genocidal federal holiday, which many American people ignorantly support and represent. We need all Americans who believe in truth and justice to wake up as we only have one percent of the Native population left after the holocaust we came through and we need to unite and make everyone aware.

We need understanding and the truth about what Columbus Day represents. We need to speak up and stop the lies of honoring barbarism and murder resulting in the near destruction and death of our people and culture. We are worth it and so are our children and future generations as we pray for peace and justice not only for ourselves but world-wide. The perpetuation of recognizing Columbus Day needs to stop now! We need to be persistent in demanding truth and respect for our people, culture and for our “mother earth”. Decolonize and Indigenize!

Let’s make this happen in every way and get rid of Columbus Day forever!

Dr. LaNada War Jack is a tribal citizen of the Shoshone Bannock Tribes. She resides on the Fort Hall Reservation, Idaho. She graduated from the University of California at Berkeley in 1971. In 1969, together with Indian students throughout California, she was a leader of the Alcatraz Island Takeover in protest of the federal government’s ill treatment of Native people and broken treaties. War Jack was on the founding board and executive board of the Native American Rights Fund. She authored "Native Resistance: An Intergenerational Fight for Survival and Life," which was released on Nov. 2019.