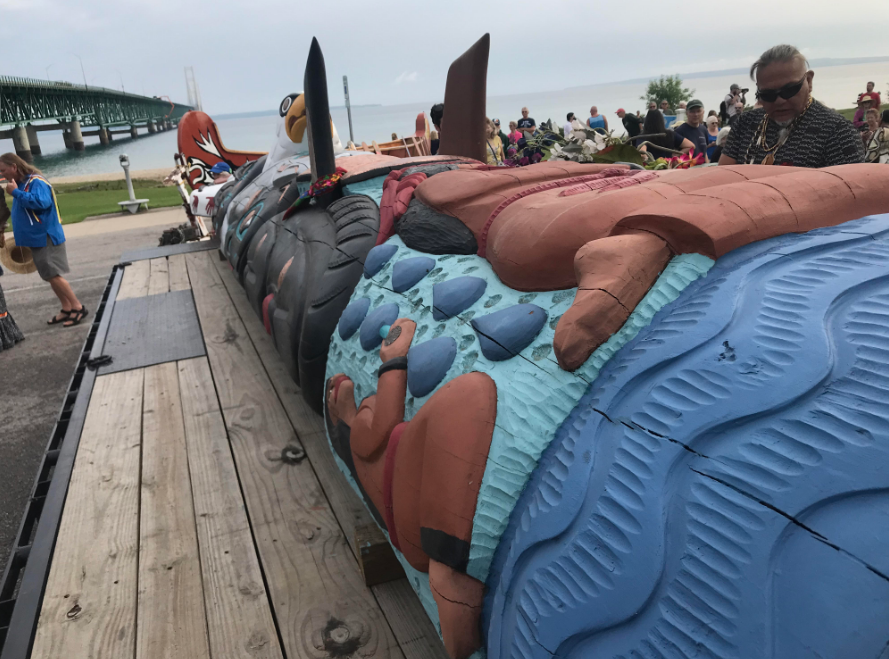 Last Tuesday, dozens of American Indians from Michigan tribes gathered on the shores of the Straits of Mackinac to see the “Red Road to DC” totem pole. It was the last official stop on its cross-country journey from the Lummi Nation, based in Bellingham, Wash. to Washington, D.C.

The totem pole was delayed Tuesday morning as it made its way across Michigan’s Upper Peninsula en route to Mackinaw City, Mich. from Minnesota. Seeing the crowd and no totem pole in sight, people arriving wanted to know if they were at the right location and joined the growing crowd. As time went by, anticipation grew and suddenly, the totem pole appeared lying on a flatbed trailer behind a truck.

For those gathered, the wait was worth it. The 24-foot, 8-inch hand carved totem pole with brilliant colors demonstrated the craftsmanship of the Lummi Nation, whose tradition of carving and painting date back centuries.

Inspired by the Biden victory in last year’s presidential election and the nomination of Deb Haaland as the first Native American to serve in a presidential cabinet member, Jewell Praying Wolf James, the only surviving member of House of Tears Carvers, decided to carve a totem pole to present to the Biden administration.

He solicited the assistance of other Lummi Nation carvers, whose ages ranged from four to 70.

The crowd soon discovered that just as a book contains chapters telling unique stories, each totem section carved and painted into the 400-year-old red cedar told a story, too.

Because of ill health, Jewel James was not able to complete the journey. His brother Douglas James (Sit ki kadem), who helped carve the totem pole, described the various sections carved and painted to highlight issues important to Indian Country, such as missing and murdered Indigenous women, environmental issues and endangered Chinook salmon, bears, and wolves. In its entirety, the totem pole addresses the issues that confront Indian Country today.

Its top section displayed a full moon with a red hand painted on it, bringing awareness to the plight of missing and murdered Indigenous women.

“We bring recognition to them. We cannot forget our sisters…our relatives,” Douglas James said. As he continued, he spoke of an Indian man sitting on the moon praying to the Creator to save Mother Earth for all children.

Just below the top of the totem is an eagle bearing a salmon design on its wings.

“The eagle carries our prayers to the heavens and the eagle is a strong symbol of our spirituality. The salmon represents how the salmon need to be able to climb up the dams to get back into the cold water to lay their eggs instead of the warm water at the bottom of the dam,” Douglas James explained.

“If we save the salmon, then we can save the orcas,” James said. He then brought in the symbolism the orca depicts. “The orca was taken from her home, just like the Native kids were taken from their families and placed in boarding schools,” bringing awareness to a topic widely discussed in Indian Country because of the recent discoveries of graves at Canadian residential schools.

Farther down the totem pole is a section containing an image of a child in a cage. The child references the Trump administration’s hand in the separation of children from their parents at the U.S.-Mexico border and their placement in cages. The parallels between the federal government’s handling of these children and those at boarding schools are equally grotesque, according to James.

Also on the totem pole are seven tears that symbolize seven generations of trauma from colonialist rule over the Indigenous people of this country.

After numerous stops in Indian Country to bring attention to Indigenous sacred sites, thousands of miles traveled, and its departure from Michigan, the totem pole made its last leg of the cross-country journey to the nation’s capital.

On Thursday, Interior Sec. Haaland spoke at the National Mall in the nation’s capital as she received the totem pole on behalf of the Biden administration.

“The fact that we are all here is not insignificant. When our nation’s capital was established, its policies were intended to exclude us, to assimilate us. Laws and policies were written without considering Indigenous communities’ challenges or their strengths, and we are working hard to undo so many consequences of these actions."

The “Red Road to DC” totem pole’s symbolism sends a strong message to Washington to slow down and be witnesses to the storytelling traditions of Native people and their ancestors – stories of abuse, trauma, neglect, genocide and above all, survival. The totem pole asks Washington to come to terms with this country’s true history and, in doing so, lift those whom they oppressed over centuries, or at the very least, as the late  Supreme Court Justice Ruth Bader Gingsburg brilliantly said, “take their feet off our necks.”