The Power of Moccasins on the Road to Healing & Reconciliation 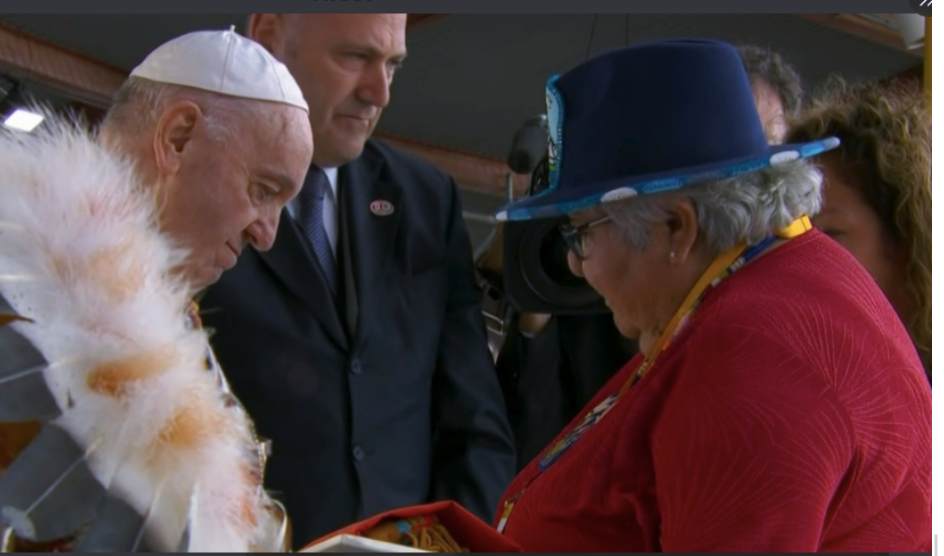 Opinion.  In the 1990s, the National Museum of the American Indian in New York City had an exhibition called All Roads Are Good that included more than 100 pairs of moccasins placed in a circle with the drum in the center. Instead of simply placing the moccasins on the floor, they were strategically arranged with the heels elevated and the toes on the floor to allow the imagination to think of dancing. Some of the moccasins were beautifully beaded with images that tied them to their unique region or tribe from throughout Indian Country.

Seeing the All Road Are Good exhibition in the summer of 1999 for the first time was a powerful experience for me because the collective arrangement of moccasins depicted the vastness of Indian Country. It was also powerful to me because the moccasins symbolized the collective journeys of our ancestors who traversed pathways of both destruction and survival.

Shoes—and in this case moccasins—carry us on our journeys.

Onondaga Faithkeeper Oren Lyons sees the significance of our walking on our life journeys.

“When we walk upon Mother Earth, we always plant our feet carefully because we know the faces of our future generations are looking up at us from beneath the ground. We never forget them,” Lyons comments.

This past March, Chief Marie-Anne Day Walker-Pelletier of the Okanese First Nation in Saskatchewan journeyed to the Vatican with a Canadian First Nations’ delegation to discuss the dark era of Indian residential schools in Canada. While there she presented Pope Francis with a small pair of moccasins. She thought the moccasins would serve as a symbol to the pope to reflect about the children who lost their lives while living at residential schools run by the Catholic church. She hoped he would ponder and pray for the past travesties committed by the church.

This past Monday, Pope Francis returned the moccasins after he made an apology before more than 2,000 residential school survivors, community tribal elders and knowledge keepers at the Muskwa (Bear Park) Powwow Grounds.

“I was asked to return the moccasins when I came to Canada; I brought them, and I will return them at the end of these few words, in which I would like to reflect on this symbol, which over the past few months has kept alive my sense of sorrow, indignation and shame. The memory of those children is indeed painful; it urges us to work to ensure that every child is treated with love, honor and respect.

“At the same time, those moccasins also speak to us of a path to follow, a journey that we desire to make together. We want to walk together, to pray together and to work together, so that the sufferings of the past can lead to a future of justice, healing and reconciliation.”

Dubbed the penitential pilgrimage by the Vatican, Pope Francis’s journey across Canada through the week concluded on Saturday. Throughout the week, he addressed the Indian residential school era on three different stops. A common thread was his apology for “evil committed by so many Christians” during the residential boarding school era.

In his Monday apology, the pope fell far short on apologizing on behalf of the Catholic Church, an institution that has committed five centuries of sins and crimes against the Indigenous peoples throughout the Americas.

He seemed to blame governments for conceptualizing the whole notion of assimilation when he said:

“I ask forgiveness, in particular, for the ways in which many members of the church and of religious communities cooperated, not least through their indifference, in projects of cultural destruction and forced assimilation promoted by the governments of that time, which culminated in the system of residential schools.”

I suppose he fails to apologize for the Catholic church because of the potential litigation that would result from admission of guilt by the institution.

According to Native American author Mark Charles (Navajo), Pope Francis lacks the courage to speak on behalf of the institution he leads and appears to be more concerned with risk management than he is of taking ownership and responsibility for the destruction the Catholic church has caused.

The conclusion of the pope’s trip that included receiving a war bonnet headdress from Cree Chief Wilton “Willie” Littlechild that horrified many Native Amercan observers begs the questions of what is next.

In the meantime, we must deal with what was given by the pope in Canada.

Remembering his words from Monday, “the moccasins also speak to us of a path to follow…We want to walk together, to pray together and to work together, so that the sufferings of the past can lead to a future of justice, healing and reconciliation.”

Moccasins do symbolize journeys. We do hope for justice, healing and reconciliation.