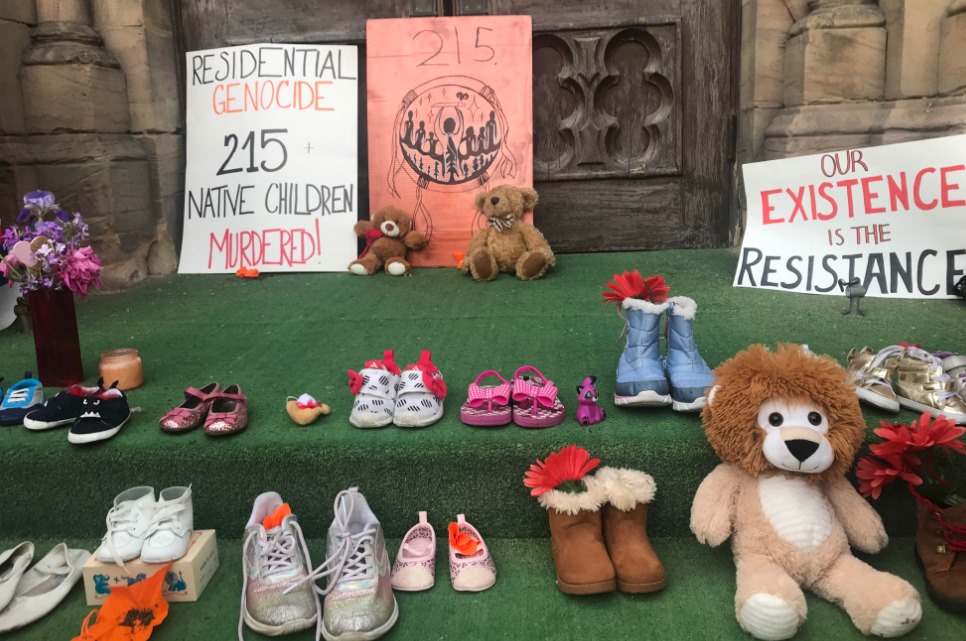 She quickly mentioned the discovery late last month of 215 children buried in an unmarked grave at the Kamloops Indian Residential School in Canada.

“Like many of you I was deeply impacted by the news of the 215 children found in a mass grave at a boarding school in Canada. I couldn’t help but think of their families. Each of those children were a missing family member, a person who were not able to live out their purpose because forced assimilation policies ended their lives too soon… I wept with the Indigenous team here at Interior,” Haaland said.

Haaland’s remarks stuck with me all week, because as this nation’s first Indigenous cabinet secretary she understands our pain.

She then announced the establishment of the Federal Indian Boarding School Initiative in the United States. The work of the initiative will be enormous in scope. The initiative is tasked with identifying past boarding schools throughout the country and investigating possible burial sites, then identifying those buried and returning the remains to their rightful tribes. Haaland asked the initiative to submit a written report to her office by April 1, 2022.

Two days later, on Thursday, Chief Cadmus Delorme of the Cowessess First Nation announced the discovery of as many as 751 unmarked graves on what was formerly the Marieval Indian Residential School in Saskatchewan.

Though the latest discovery was yet again in Canada, investigations of Indian boarding schools in the United States are long overdue.

Native Americans have known there to be graves on the grounds of Indian boarding schools for decades. We also have known about physical and sexual abuses perpetrated by those who operated the schools.

We also know about the historical trauma inflicted on our communities that have yielded countless social ills among us.

The National Native American Boarding School Healing Coalition (NABS) has identified 367 historically assimilative Indian boarding schools that operated nationwide between 1870 and 1970. According to NABS, the organization has only been able to locate records from 38 percent of those boarding schools.

Because the records have never been fully examined, it is still unknown how many Native American children actually attended, died, or went missing from the schools.

NABS supports Haaland’s initiative because the organization believes that it is time for truth and healing.

“We have a right to know what happened to the children who never returned home from Indian boarding schools,” NABS said in a statement on Friday.

There is no doubt that the work of the Federal Indian Boarding School Initiative will be painful. It will be like pulling back a scab only to find out how bad the injury really is.

But with only nine months to do the job, the initiative may not provide all the information that has been buried for decades.

The Commission would “formally investigate and document, for the first time in history, cultural genocide, assimilation practices, and human rights violations of Indian Boarding Schools in the United States, to study the impact and ongoing effects of historical and intergenerational trauma in Tribal communities, and to provide a forum for Indigenous victims and families to discuss the personal impacts of physical, psychological, and spiritual violence.”

On Thursday, the National Congress of American Indians (NCAI) approved a resolution calling for a federal commission to build on the Interior Department’s initiative.

Since being sworn in as the 54th secretary of the U.S. Department of the Interior, Haaland has proven she is the right person at the right time.

Having an Interior secretary who weeps with her fellow Indigenous peoples and nations offers hope during these dark, painful times. And establishing an initiative to investigate the boarding school era may prove to be the right step towards truth, reconciliation, and healing.