The Dilemma of the Fourth of July

Editor’s Note: This commentary was published in observance of the Fourth of July holiday in 2015. Native News Online is republishing it again this year. 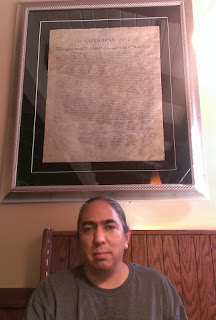 The other day I was eating dinner with my wife in a restaurant located in Gallup New Mexico, a border town to the Navajo reservation. Gallup was recently named “Most Patriotic Small Town” in a nationwide contest. Soon after sitting down I noticed that we were seated at a table directly facing a framed poster of the Declaration of Independence.

The irony almost made me laugh.

When our server, who was also native, came to the table, I asked if I could show him something. I then stood up and pointed out that 30 lines below the famous quote “All men are created equal” the Declaration of Independence refers to Natives as “merciless Indian savages.”

THE IRONY WAS THAT THE RESTAURANT WAS FILLED WITH NATIVE AMERICAN CUSTOMERS AND EMPLOYEES. AND THERE IN PLAIN SIGHT, A POSTER HANGING ON THE WALL WAS LITERALLY CALLING ALL OF US “SAVAGES.”

The server was concerned that I might be upset so after our dinner the manager of the restaurant came to our table and asked if everything was OK. I showed her the quote and assured her that I was not trying to cause problems. After more than a decade of living on the Navajo Nation, I have become used to such offenses when I travel outside of our reservation. After the manager left, I noticed that another Native couple seated near us had taken interest in our conversation. So I invited them over and showed them the same offensive line hanging over our table. They were astounded that throughout their entire education they were never told the Declaration referred to Natives in such a way.

If the poster had labeled any other group of people as “savage,” or if the source of the words was anything else besides one of our country’s founding documents, the restaurant in question would have long ago been sued and the parties responsible for hanging the poster most likely disciplined. But because the targeted group was Natives, the source was the Declaration of Independence and the responsibility for hanging the poster belonged to the restaurant’s national corporate offices; not only is the poster still hanging today, but on July 4th the entire nation will celebrate the message of this poster and the signing of this Declaration. For we have declared it a national holiday complete with fireworks, parades and speeches.

This is the dilemma that Native ‘Americans’ face every day. The foundations of the United States of America are blatantly unjust. This land was stolen. Native peoples, Africans and many other minority communities have long been recipients of systemic racism. And the roots of it are right there for the entire world to see, printed in many of our founding documents; like the Declaration of Independence, the Constitution and United States Supreme Court case rulings.

We announce it. We flaunt it. We celebrate it.

AS A NATION WE EMBRACE THIS HISTORY BECAUSE WE ARE LARGELY IGNORANT OF THE TRUE NATURE OF OUR PAST AND HAVE NEVER BEEN HELD ACCOUNTABLE FOR OUR ACTIONS. AS AMERICANS WE CELEBRATE OUR FOUNDATIONS OF ‘DISCOVERY’ AND CLING TO OUR NARRATIVE OF ‘EXCEPTIONALISM’ BECAUSE WE HAVE BEEN TAUGHT THAT THIS NATION WAS FOUNDED BY GOD ON A PRINCIPLE OF FREEDOM FOR ALL.

But the reality is that the United States of America exists because this land was colonized by Europeans who used a Doctrine of Discovery to dehumanize, steal from, enslave and even commit cultural genocide against indigenous peoples from both the “New World” and Africa.

GEORGES ERASMUS, AN ABORIGINAL LEADER FROM CANADA, SAID, “WHERE COMMON MEMORY IS LACKING, WHERE PEOPLE DO NOT SHARE IN THE SAME PAST, THERE CAN BE NO REAL COMMUNITY. WHERE COMMUNITY IS TO BE FORMED, COMMON MEMORY MUST BE CREATED.”

Those are wise words that get to the heart of our national problem regarding race. On days like Columbus Day, Thanksgiving and the Fourth of July, the United States of America celebrates its history. But a majority of our citizens celebrate in ignorance. After traveling throughout the country and educating audiences on the Doctrine of Discovery and its influence on our nation, I would estimate that less than 3% of Americans know this history or understand its impact on the current-day situation of Native peoples.

As a nation, the United States of America does not share a common memory, and therefore struggles to have true community.

So this Fourth of July I invite every American to start their day by learning about the Doctrine of Discovery. Allowing the reality of the dehumanizing nature of this doctrine to temper your celebrations.

You can still light your fireworks and eat your BBQ as you celebrate a hard fought victory over the British. But at the end of the day, I humbly ask you to conclude your celebrations with the following prayer.

“May God have mercy on the United States of America and give us the courage necessary to create a common memory."

Mark Charles (Dine’) is a candidate for the President of the United States.