The Attack on the U.S. Capitol Shows America Exactly Who We Are 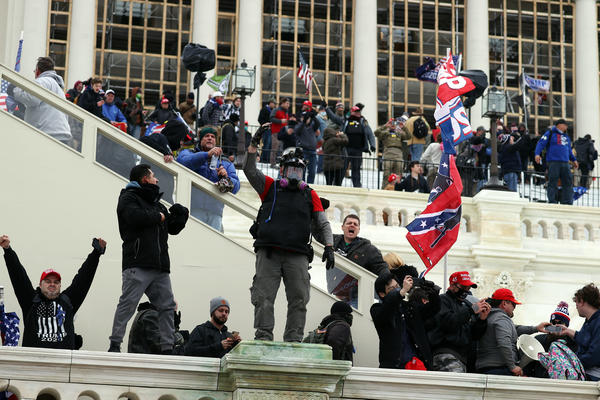 Opinion. On September 11, 2001, 40 brave Americans—true patriots—came to the realization the jet plane they were on had been hijacked by four foreign terrorists. The flight originated in Newark, N.J. and was bound for San Francisco. The hijackers diverted the jet towards the dome of the U.S. Capitol in Washington, D.C. Because of their bravery, the would-be flying weapon—United Airlines Flight 93—was diverted to an empty field in rural Pennsylvania. Each year on Sept. 11, Americans remember these patriots who died that day. Their bravery saved the U.S. Capitol, one of America’s most treasured landmarks, from destruction by the evil of foreign terrorists.

On Wednesday, January 6, 2021, domestic terrorists, wearing red “Make America Great Again” caps, entered the Capitol at the urging of the deranged President Donald Trump. These pro-Trump supporters used American flag poles to break windows, and bats and pipes to beat Capitol Police to create a riotous insurrection. An assault of this proportion was the first since the U.S. Capitol was attacked during the War of 1812.

I keep thinking about the contrast between those true patriots and those who were under the delusion on Wednesday that what they were doing was patriotic. The foreign terrorists were stopped from destroying the Capitol. The domestic terrorists caused enough violent destruction that contributed to the deaths of five people and physical damage to the building.

One of the people that died was Capitol Police Officer Brian D. Sicknick. These rioters are the same people who stubbornly defend police, veterans and service members when Black Lives Matter supporters take to the streets in protest or when Colin Kaepernick takes a knee to condemn police brutality.

Incredibly, most of them, white men, walked out of the Capitol unscathed and bragged about their actions on social media as if they had won a major duel. It did not take long for American Indians to note on social media that they were not afforded such kid-gloved treatment while engaging in peaceful protests at Standing Rock. No, at Standing Rock, water protectors, including women and children, were met with tear gas, vicious dogs, rubber bullets and water cannons, which were used to soak them in frigid 23 degree temperatures one Sunday night.

Wednesday’s domestic terrorists, who came from various parts of the country, were there because Trump had sent a call out to them to come to the nation’s capital on Jan. 6 in a mid-December tweet. He told his followers “it was going to be wild.”

Earlier Wednesday, the president spoke to his followers at the White House Ellipse near the National Mall. He told them to walk the mile and a half to the Capitol to fight for democracy. This came after two months of filling his followers with lie after lie with unsubstantiated false claims of a stolen election filled with fraud. In their delusional minds, they actually thought they could overturn the election of President-elect Joe Biden to keep Trump in the White House.

They entered the Capitol minutes after Vice President Mike Pence would not attempt to overturn the Electoral College votes submitted by the 50 state governments.

Those acquainted with the security on Capitol Hill, know the typical entry into any of the buildings requires going through heavy security similar to that found at TSA stations at airports. These thugs bypassed any security in place on Wednesday.

Television footage shows the pro-Trump supporters storming the Capitol, yelling “USA, USA, USA” and “Stop the Steal” while carrying American and Trump flags as Congress began the process of certifying the 2020 presidential election.

Leaders of the attempted coup were seen outside the Capitol doors waving them to enter the Capitol and using bullhorns to bring them forward. They waited until after Pence made his announcement.

Inside the House of Representatives chambers was Rep. Markwayne Mullin, a tribal citizen of the Cherokee Nation and a conservative who represents Oklahoma’s 2nd congressional district. Mullin was present and close by when the Trump mob began to break through the doors of the House chamber. He witnessed the Capitol Police shoot a California mother, who later died at a Washington, D.C. hospital.

A long-time staunch supporter of President Trump, Mullin said after the chaotic scene that he was trying to keep people from being shot. Later Wednesday, he was quoted by an Oklahoma newspaper saying those who breached the Capitol weren’t “your normal Trump supporters.”

Since Wednesday, politicians have made statements such as “this is not who we are” as Americans, which whitewashes the blatant violent actions of the mostly male and mostly white rioters.

The denials of just how evil these Trump supporters are carried over to the media outlets, particularly right-wing outlets, that blamed the attempted coup on Antifa. The FBI has since debunked these claims.

Playing the blame game can never justify the deplorable seditious actions by the rioters and pro-Trump supporters that left five people dead and dozens of others injured.

Instead of denying the obvious, Americans should pull the veil of deceit caused by Donald Trump and his cohorts.

By this week, there are mounting calls for Trump’s immediate removal from office.

Two of his most loyal cabinet members, who have served him and have been complicit in his policies, Transportation Secretary Elaine Chao, wife of Sen. McConnell, and Education Secretary Betsy DeVos, resigned after the attempted coup. Their sudden departures two weeks before Trump is due to leave the presidency should not be viewed as heroic, but rather as cowardice. If these two were true patriots, they would have fulfilled their responsibilities as cabinet members invoking the 25th Amendment, which allows the vice president and cabinet members to remove a president deemed incapable of performing the duties of the presidency.

Yes, this is exactly what America is. American Indians know better than anyone the values of violence and racism that are the foundation of this country.

It is long past time that we stop denying who we are. Domestic terrorists are the greatest threat to our democracy.