Rittenhouse is a Poster Child for Vigilante Boys with Assault Weapons 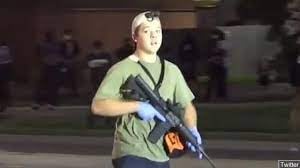 On Friday morning, President Joe Biden left the White House to take a short trip to the Walter Reed Medical Center in Bethesda, Md. to have a routine colonoscopy. Because he was put under anesthesia, the president transferred power to Vice President Kamala Harris. Under the same set of circumstances, then President George W. Bush transferred presidential power twice to his vice president.

So, for about 85 minutes Harris became the first woman ever to take on all of the powers and duties of the presidency. Vice President Harris, who is both Black and Asian American, adds to the significance of the historic moment.

About an hour and half later in Kenosha, Wisconsin, a jury of 11 white and one Hispanic person acquitted Kyle Rittenhouse of all charges after deliberating for 26 hours. I wasn’t overly surprised they came to this decision, avoiding taking deliberations into the weekend. I also wasn't surprised by the verdict because in America, whenever race is part of the issue, the sides of justice tend to fall on the side of white people.

What remains in my head are the images from Kenosha on August 25, 2020 showing a 17-year-old with an AR-15 style semi-automatic rifle killing two men and injuring another at a Black Lives Matter protest. Rittenhouse became a poster child for vigilante boys with assault weapons.

One has every reason to wonder what a 17-year-old boy was—regardless of the color of skin—doing with an assault rifle.

Rittenhouse’s defense for killing two and shooting another was self-defense.

His legal team put him on the witness stand and, boy, did the boy put on a show complete with crocodile tears speaking about how threatened he felt on the night he gunned down protestors. He stated he acted in self-defense. To some, he was suddenly the victim—irrespective of two families who lost a loved one because Rittenhouse showed up at a protest with an assault rifle and fired it.

The verdict, once again, showed two Americas: one that views Rittenhouse as a folk hero, a Rambo for justice who stood tall against those on the left and the other that seeks stricter gun-control laws and justice for people of color.

The right-wing conservatives, who helped raise bail for Rittenhouse and pay for his legal team, were quick to praise the verdict.

“NOT GUILTY!!!!!!!” tweeted Rep. Matt Gaetz (R-FL), who earlier this past week said he would offer Rittenhouse an internship if he was acquitted.

“May Kyle and his family now live in peace,” Rep. Marjorie Taylor Greene (R-GA), who urged her followers to donate to Rittenhouse’s legal defense, chimed in. “Those who help, protect, and defend are the good guys.”

Rittenhouse is not one of the good guys. He is a poster child for everything wrong with white teenagers with assault weapons. Rittenhouse was a 17-year-old who had no business showing up with an AR-17 rifle at an already charged protest that turned into a scene of deadly violence. Why? Because of Rittenhouse. The two victims died because of him.

Vice President Harris, who earlier in the day made history by becoming the first woman to become acting president in the history of the United States weighed in on the Rittenhouse verdict.

She said the verdict “speaks for itself.”

“As many of you know I’ve spent a majority of my career working to make the criminal justice system more equitable and clearly there is a lot more work to do,” she said.

There can be no denying the American justice system favors white America and work needs to be done to change that fact.

Sadly, the Kenosha verdict may prove to be much more significant than the temporary transfer of the presidency to Vice President Harris.

The verdict out of Kenosha unquestionably gives white vigilantes the impression they now have the right to take arms and shoot people who stand up for rights of people of color and walk away without paying the penalty for their deadly actions.